With personalized speech-assistive technology, people who suffer from voice disorders and diseases, like ALS, can express their true selves again 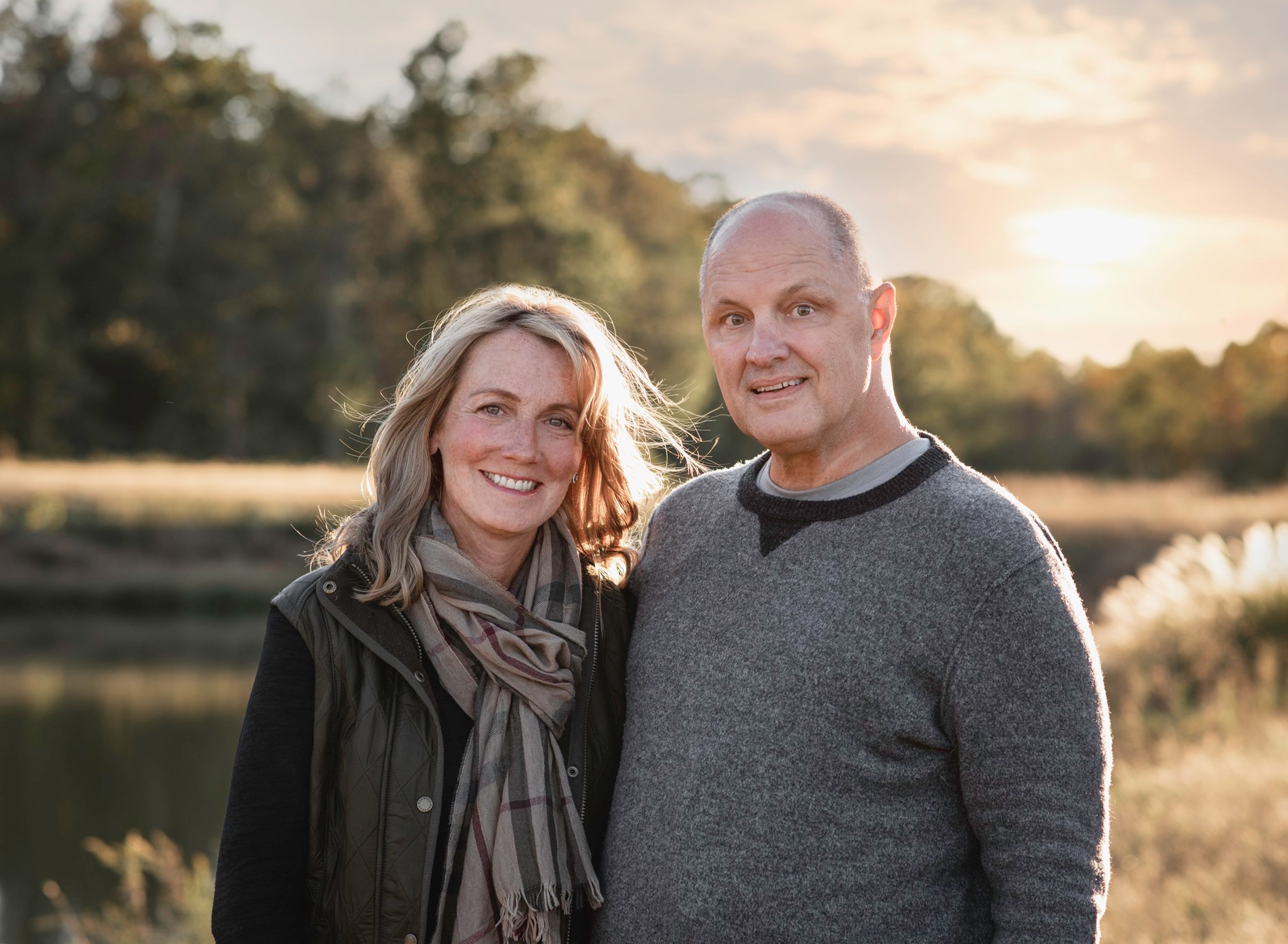 Jeff Sarnacki and his wife Juliet in November 2019, a year after Jeff was diagnosed with ALS. [Credit: Theresa Marlowe of Alfheim Photography]

Talk to me, with your eyes

Jeff Sarnacki, a 60-year-old retired federal law enforcement agent and security consultant, lost his voice in June 2019. Doctors diagnosed Jeff with ALS, the degenerative nerve disease, in November 2018 at Johns Hopkins Medicine. Jeff says he started to observe changes in his voice the month before.

“I noticed I started to slur words. Knowing that this was the beginning of the loss of my voice, I began to bank my voice,” says Jeff.

Voice banking is a way of preserving a person’s voice before they lose it. Software programs collect these recordings to make personalized speech-generating communication devices. These are tools that speak for a person without a voice. Since 2014, speech technology has advanced so that people who have limited speech and cannot voice bank can still be given a customized voice. For some it can be life-changing, but for others, it raises issues about costs and necessity.

About 7.5 million people in the United States have voice disorders, according to the National Institute on Deafness and Other Communication Disorders. Until recently, their prosthetic voices sounded robotic, and did not emulate their past voice — an integral part of their personal identity. In 1968, the first text-to-speech device was invented by a Japanese laboratory, according to the Smithsonian Institution. Since the early 1980s, engineers have been able to personalize text-to-speech devices for the speech-impaired with voice recordings and software designed to approximate the recipient’s real voice. DECtalk was one of the first text-to-speech devices invented by MIT engineer Dennis Klatt, who made Stephen Hawking’s voice when ALS took away his speech.

Voice disorders entail problems with the pitch, loudness, and quality of a person’s speech. Some vocal disorders are caused by vocal disruptions like spasmodic dysphonia, when vocal folds spasm and make the voice sound shaky or tight. There are other disruptions like head and neck cancer, which affect a person’s speech if they receive surgery on their throat or voice box. Other disorders involve neurological impairment and muscle weakness called dysarthria, which is associated with brain injury, Parkinson’s disease, ALS, and other diseases.

After finding out about his diagnosis, Jeff and his wife Juliet got to test out speech assistive technologies at their local ALS Association chapter in Maryland. That’s where they found out about VocaliD, a company that makes custom synthetic voices using artificial intelligence. Founded in 2014, VocaliD’s team was the first to create personalized voices for those who could not voice bank or were born with speech impairments. This innovation was made possible using complex speech-algorithms and voice donations from volunteers. Jeff voice-banked with VocaliD until February 2019, when he became hard to understand. When he lost his voice completely that summer, he didn’t have enough of his voice recordings to create a personalized, speech-assistive device. But his brother helped him to complete the requirements by donating his voice through the same VocaliD process.

“I appreciate that my brother helped, but there are many apps out there with packaged voices that others use,” says Jeff. “We were able to afford a voice that sounds like me. Many would not be able to.”

In spring 2019, New York University Steinhardt School’s Communicative Sciences and Disorders (CSD) Department organized a “voice drive” for people to donate their voices to the VocaliD human voicebank program. VocaliD’s ambassador program works with high schools and universities, encouraging volunteers to record and donate their voices to the company. Chloë Thorburn, who is a CSD major and senior at NYU, set this NYU voice drive in motion when she reached out to VocaliD in fall 2019 to start the now recurring drive.

“We were looking for some projects that we could do that would let students and faculty alike, throughout the speech pathology department at NYU, get involved in making a difference in the lives of the people we serve and the clients we serve,” says Thorburn.

Voice donations are part of VocaliD’s BeSpoke product, which are for people who do not have enough of their own speech to create their own synthetic voice. People who need BeSpoke produce sounds they can still make from their own voice, such as vowel-like sounds, says Rupal Patel, founder and CEO of VocaliD. Using an algorithm, VocaliD engineers match the vowel-like sounds to a donated voice recording. This match is put together using several hundred different parameters including pitch, loudness, age, gender, and accent. After the algorithm finds the best match with the donor’s voice, it mixes together the two sounds to form a unique voice that sounds very close to the recipient’s. The algorithmic engineers install the custom voice into the recipient’s speech device. The more people who donate their voices, the more options the recipients have to find the closest match, says Patel.

“Just think about it kind of like if you had a prosthetic leg,” says Patel. “They come just with certain kinds of inserts and if you wanted to make it fit really properly, then you’d have to personalize it to that person. That’s what we’re doing.”

This past fall about 50 people from NYU donated recordings of their voice to VocaliD, says Thorburn. Since spring 2019,  semester-long voice drives have met on NYU’s campus.

Jeff recorded his voice without help from volunteer voices because he and his brother’s voices were so similar. Since August 2019, Jeff Sarnacki has used VocaliD’s speech assistive software on his iPhone. He types sentences by pressing letters on his iPhone keyboard, which his VocaliD voice speaks aloud. With Jeff having no use of his right hand and slowly losing the use of his left hand, he is now transitioning to a device called Tobii Dynavox I-15+, which will allow him to speak with his VocaliD voice through eye gaze. He feels fortunate to have had the funds to procure this custom voice, which many others do not have access to.

Even with donated voices, custom voices can be expensive. The main cost is the process of building the text-to-speech engine from the voice recordings, says VocaliD’s Patel. The price ranges between $100 and $1500. The eye-tracking Tobi Dynavox device costs between $12,000 and $16,000, according to Blair Casey, an expert in assistive technology at the ALS non-profit Team Gleason. So, given the expense of unique voices and speaking devices, most speech-impaired people use devices with built-in, generic voices. This characteristic becomes a huge problem when wanting to express individuality, says Patel.

“These devices come pre-programmed with a number of different voices so they don’t have anything to do with that individual,” says Patel. “So what we’re doing is making that voice more personalized to the individual so they can feel ownership over their assistive technology.”

Personalized voices for speech-impaired people are still in their infancy. Since 2015, VocaliD has helped over 250 people with speech impairments, says Patel. Though VocaliD’s advertisement is currently only by word of mouth, they plan to do more publicizing once they receive more funding for marketing, Patel says.

In receiving his voice through VocaliD, Juliet says it was important for both her and Jeff that his speech assistive device sounded like him and not a machine. Juliet values that they can still have normal conversations and a normal marriage. Even with his disease, she still sees Jeff as the same person and VocaliD emphasizes this.

“This is going to sound crazy, but I don’t notice a difference,” says Juliet. “When I think about a conversation he and I had maybe last week or a month ago, I don’t remember that it was on a mechanical voice. I just remember the content of the conversation…If we didn’t have this voice, we wouldn’t be able to do that.”

Mobile in a powered-wheelchair, Jeff says almost all his physical strength is gone. He cannot walk or eat. But through it all, Juliet says he remains positive and brave. With Jeff’s steadfast character, along with his VocaliD voice, Juliet sees past Jeff’s weakness.

“I don’t notice his physical limitations at all. That part has not fazed me,” says Juliet. “If we go to the zoo or if we go for a walk, I don’t remember that he was using a wheelchair or that he was talking. I just remember we went to the zoo and then we had a good time.”

Overall, Posner thinks having a personalized voice on a speech device is a positive idea, but not always necessary. She imagines that it gives people who can’t vocally communicate a confidence boost. Others argue that people who can’t speak need a customized voice.

Jung donated her voice to New York University’s first VocaliD voice drive in spring 2019 when she was a student in NYU Steinhardt’s CSD major. She enjoyed the recording experience knowing that she would be giving people a voice that they could connect with.

“Just to learn that that’s all we have to do to give these people a voice… I just felt it was such an incredible opportunity and I had a lot of fun doing it too,” says Jung.

Besides VocaliD, there are other custom voice making companies, such as Acapela Group and CereProc. Along with Jung, Posner thinks speech-assisted communication devices mean everything to patients.

Before getting ALS, Jeff not only communicated with his speech, but through his actions.

“I was a very capable and busy guy who was used to providing assistance, not taking it,” says Jeff.

Juliet explains that he enjoyed doing projects for other people.

“He’s just always showing his love through doing things,” says Juliet, “He made his daughter a headboard from their old fence at their house. That’s just who he is and that’s a way that the ALS is really unfair. You know, it’s just taken that ability from him.”

With Jeff’s professional background, Juliet said without his condition he would normally be helping people during this COVID-19 crisis.

“He was a first responder, he was a federal law enforcement agent. So he would be the one helping fight this and helping communities fight this,” says Juliet, “So now he’s on the side of being someone that the community is trying to protect.”

Even though Jeff says it’s still difficult not being able to engage normally in conversation, he’s thankful for the voice and that he can communicate.

“It sucks not being able to speak, but it is worse not being able to engage in conversation when people are talking,” says Jeff. “I am grateful to have the ability to speak with a voice that, while not mine, sounds similar and provides my family with a continued feeling of speaking to me.”

Jeff passed away at his home on Wednesday, May 20.

May 24, 2020: The article was updated to acknowledge that Jeff Sarnacki passed away on May 20.