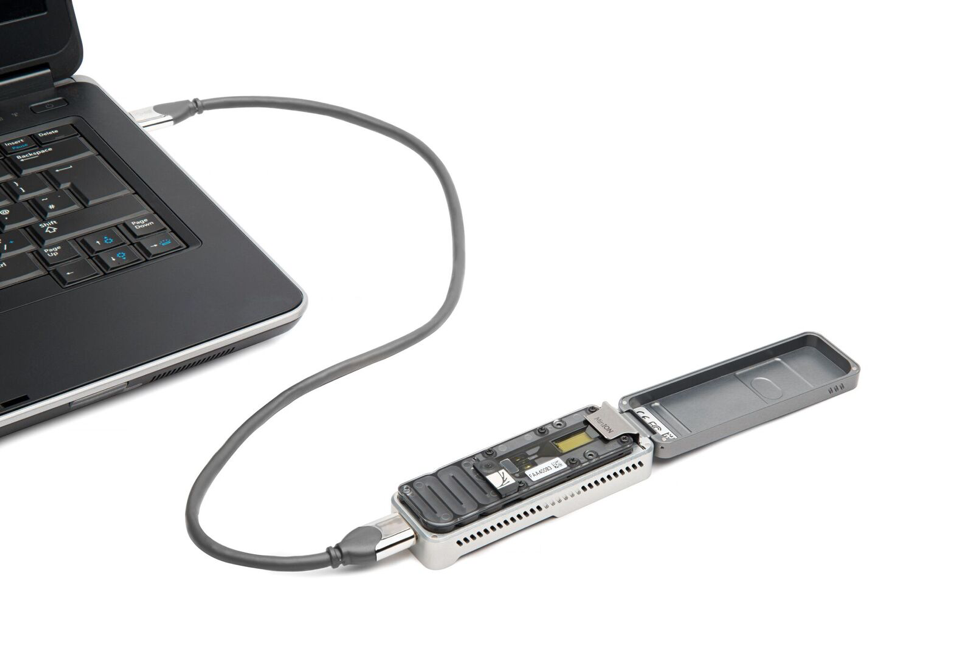 The MinION, shown plugged into a laptop computer, allows users to do with a hand-held device what, until recently, required an entire laboratory. [Image credit: used with permission from Oxford Nanopore]

Handheld DNA identification devices sound like something out of Star Trek. But they not only already exist, they’re showing great potential for real-world uses ranging from diagnosing infectious diseases and tracking food shipments to catching wildlife poachers.

NASA even plans to bring one of the newer handheld next-generation sequencers — the MinION from Oxford Nanopore Technologies — aboard the International Space Station to collect data on how space flight affects human and microbial DNA. Maybe someday it will even be used to look for DNA-based extraterrestrial life.

“I think that the possibilities are endless and it’s a very exciting technology,” says Lauren Cowely, a Ph.D. student at Public Health England who used MinION to study the Ebola virus in West Africa. “There are so many advantages to it, but one of the obvious advantages is how small, portable and easy to use it is.”

DNA sequencing is critical to modern science because the most reliable way to identify an organism and determine its characteristics is to read its genetic code. This code consists of the specific order of molecules called nucleotides, which give an organism its uniquely identifiable DNA sequence. Four kinds of nucleotides — adenine, cytosine, guanine and thymine — make up millions of pairs to form the intertwined strands of DNA found in every living cell.

For decades, the standard DNA sequencing technology had required polymerase chain reaction, which creates lots of copies of a DNA segment so scientists can more easily examine it. But PCR has some important limitations: It can only examine one gene at a time, and it requires bulky lab equipment that costs thousands of dollars. MinION and the other next-generation sequencing (NGS) devices are not only small enough to be carried, they typically cost less than $1,000 and can scan for many genes simultaneously.

Many NGS devices are still prototypes, but enough are already in use that they’re being employed in all sorts of creative ways, including testing for infectious diseases, figuring out whether that pricey cut of fish is actually wild salmon, and determining whether timber has been illegally harvested.

With so many new applications, it is no surprise that MinION isn’t the only product out there. U.S.-based company Illumina also has several NGS devices on the market.

Many users of the new devices are delighted. “You can ask a whole lot more questions than you can ask PCR,” says Cowley.

So why isn’t every lab in the world dumping its PCR equipment and saving money and space? As with many new technologies, the simple answer is that NGS is new and unfamiliar. It’s also not yet perfect. One problem is that the MinION does not always provide consistent results, according to Justin O’Grady, a medical microbiologist at the University of East Anglia in Norwich, England. He says that MinION needs further development to deliver more reliable and accurate DNA sequence data. Because of this, many scientists are waiting for the technology to mature a bit before adopting it.

MinION’s central feature is its nanopore, a synthetic protein with a tiny hole in it. A stream of ions flow across the nanopore, and as DNA passes through the stream, each type of nucleotide disrupts the stream in a distinctive way. This information flows in real time to a computer attached to the device. That means a scientist can prepare the sample to be tested, place it inside the MinION, and then immediately get information about what’s in the sample. Software checks the detected sequence against a worldwide database and identifies the type of organism almost immediately.

NGS devices may also be particularly useful in identifying disease microbes. Many infections are caused by more than one pathogen, so NGS’ ability to identify all culprits in an infection is a huge advantage for scientists, says O’Grady, who uses MinION to study antibiotic resistance and urinary tract infection.

“What we try to do is provide an answer as quickly as possible so we can effectively deploy antibiotics,” says O’Grady. Instead of prescribing broad-spectrum antibiotics before a bacterial culture confirms infection (which usually takes a whole day), a doctor using a NGS device can get an immediate result and prescribe a targeted treatment on the spot. In doing so, health-care workers can avoid contributing to the spread of antibiotic resistant bacteria, a potential side effect of unnecessary antibiotic treatments.

So will there be next-next generation sequencing devices eventually, too? Cowley, for one, is sure of it. The devices are “going to get smaller and cheaper,” she predicts. “The ultimate goal is to one day have it available to every doctor.”