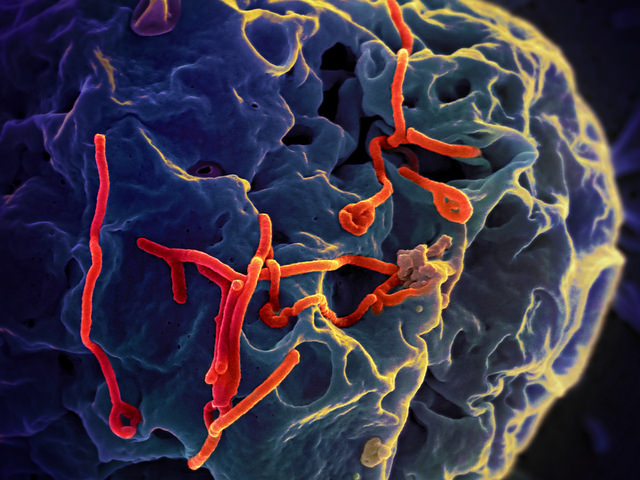 Ebola viruses (orange) on a monkey skin cell (grey). The virus’s ability to linger in the body has added a layer of complexity to the outbreak. Image Credit: NIAID | CC BY 2.0.

To wake a sleeping herpes virus

We like to feel we control our bodies. But each of us is home to trillions of microscopically tiny lodgers. Maybe you’ve read about attempts to control our bacterial inhabitants with probiotics or fecal transplants. But bacteria are just part of the menagerie we carry inside us called the microbiome.

A key piece of our microbiome puzzle is viruses. They feel transient: Surely once the sniffles end, our immune system has destroyed all traces of the influenza virus? But some viruses linger in the body and make trouble for us when we don’t expect it. Viruses are small — just one-fifteenth the size of a bacterium, so they easily evade notice. Recently, for example, lingering Ebola virus caused a Scottish nurse who had been healthy for ten months to catch meningitis. Ebola virus has even been found in a patient’s semen nine months after his symptoms cleared.

Like bacteria, viruses “have an important impact on who we are,” said Columbia University’s Ian Lipkin, one of the world’s most prominent virus hunters. But until recently, scientists have lacked the tools to understand these microscopic residents. A few viruses have been solidly linked with specific diseases, like human papillomavirus and cervical cancer. But researchers suspect there are many more connections — if only they could spot the viruses. “The first step in trying to implicate an agent in an infectious disease is to find it,” explained Lipkin.

And it’s not only about spotting the bad bugs: Down the line, doctors may even be able to use viruses to keep people healthy. “If we can make a connection between beneficial viruses and good health, I think the next step is to try to manipulate them,” said Vincent Racaniello, who also studies viruses at Columbia.

The daunting task of peering inside the world of our viruses, which scientists call the virome, is more feasible now than it was just last year — thanks to three recently published strategies for understanding our viruses.

One is from Lipkin’s lab. His technique makes it easier to distinguish viral genetic material from human, bacterial and fungal DNA in a sample of blood or lung tissue. Scientists already can do this for bacteria, which are easier to identify because even very different types share certain sections of DNA. By tagging those stretches and eliminating unmarked DNA, scientists know that what they’re looking at is only bacteria.

Viruses are generally much harder to find because they carry about one-fiftieth as much genetic information as bacteria and don’t share sequences. So Lipkin developed a set of more than 2,000 unique probes based on a database of 200 types of viruses. If a probe finds its programmed sequence, it attaches to that material and flags it so scientists can translate the full genome and identify the virus. Genetic probes aren’t new, but now instead of targeting one or two viruses at a time, scientists can scale up to a viral census.

The second strategy comes from a team at Washington University in St. Louis that has developed another set of genetic probes. While both teams are focusing on research applications as they fine-tune their techniques, they hope the tests will one day help patients. “We are looking toward clinical [uses], but that requires development in and of itself,” said Kristine Wylie, who studies the microbiome at Washington University.

As proof of concept, the team tested their probes on eight samples from sick infants and toddlers who were brought in feverish with unknown infections. “If we could better identify viral infections,” Wylie said, “we would be better able to manage these cases.” The probes identified about 50 percent more viruses in the samples than did conventional sequencing techniques.

Both sets of probes are relatively cheap, although the final price also depends on sequencing costs, which vary between labs. Lipkin says running his probes costs about $40 per sample when they are used in bulk. In order to use the probes as diagnostic tools they also need to be reliable, which poses a manufacturing challenge Lipkin is working to address.

For diagnosing viral diseases we already know about, probes are considered pretty promising. “For clinical purposes, I think these are going in the perfect direction and making great strides,” said Ken Cadwell, a biologist at New York University Medical Center.

But the prospects are murkier for catching unfamiliar viruses. “You won’t get entirely new viruses with this method,” said Lipkin. “There are examples where I’m certain this will fail.” He knows because he’s already found one — a tilapia virus that’s too dissimilar from known viruses to be recognized by his probes. New probes can be created as viruses are discovered, Lipkin added, so over time the process will miss fewer viruses.

But Cadwell worries these tactics may blind researchers to large portions of the virome that are missing from databases because so little is known about them. “If you’re talking about a virus that might be new or unstudied, you’re not going to get a lot of information,” he said. He compares it to Google: It can find helpful results about popular topics, but not about something only two people have ever written about.

The third technique was developed by Stephen Elledge, a geneticist at Harvard Medical School. It offers a historical perspective: Rather than determining what viruses are currently present, it identifies antibodies in blood, which act as the immune system’s memory of previous infections. When the immune system detects a virus, it builds proteins that specifically recognize that virus. After the infection is cleared, some of these antibodies are retained as templates in case the same virus re-infects the person.

Recall isn’t perfect, so this record won’t be complete. However, because it can take time for a virus to affect overall health, capturing an individual’s past infections would likely provide helpful information. “It’s not a perfect technique, but it’s not intended to be,” said Cadwell.

Elledge knows its constraints well. He says hundreds of people with undiagnosed conditions have sent him blood samples or medical records hoping he can identify what ails them. “I doubt if my test can really help them” beyond ruling some culprits out, he said.

Even if it turns out we can’t control our resident viruses as well as we can bacteria, studying the virome should still offer some health benefits. Cadwell points out that human diseases aren’t static. For example, inflammatory bowel disease, which he believes is caused by an as-yet unidentified virus, has increased dramatically in the developed world in recent years. If we knew the virus involved and could assess the changing frequency of that virus, we could predict future incidence of the disease.

Cadwell says, “That helps us anticipate the diseases of the future.”