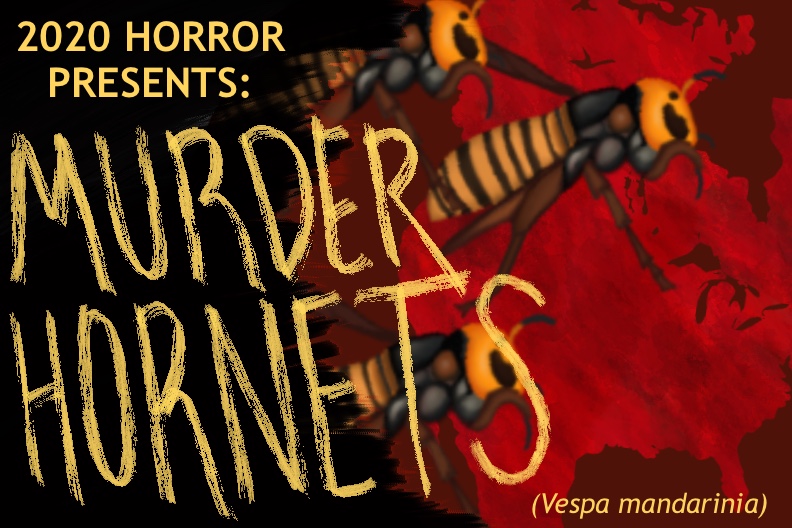 The Asian giant hornet, also called the “murder hornet,” have been sensationalized in the media, almost like the villain in a 50’s horror movie. [Credit: MK Manoylov | CC BY-NC-ND 2.0]

This New York Times article and other pieces about murder hornets coming to the United States might have raised your blood pressure. But diving deeper into the subject of murder hornets may lower it.

What are they actually called? Asian giant hornets (Vespa mandarinia). They seem to have gotten their name from their painful sting in Japan, though entomologists are still debating whether putting “murder” in the insect’s name is actually fair.

Hmm…what’s the proportion of “murder hornet deaths” to other venomous animal deaths?

Between 1992 and 2016, venomous animals (which would include bees, wasps and hornets) kill between 52 – 59 people in Japan, according to the Global Health Data Exchange.

What could be considered more murderous, however, is what the Asian giant hornet does to bees when they’re introduced to a new area. The hornets can kill up to 40 bees a minute when up against defenseless bees, such as the ones in Europe.

Oh dear, that’s not good for the bees. Certainly not. But Japanese bees have adapted defenses against the Asian giant hornets. Japanese honey bees can tolerate temperatures up to 118°F. Asian giant hornets can withstand only 115°F. The Japanese honey bees will swarm a hornet, vibrate their bodies, and from the movement raise the temperature in the swarm to 117°F degrees. The Japanese bees essentially know how to cook the hornet to death.

Cool cool, that means our bees are safe too, right? Unfortunately not. Just because one species of bee evolved defenses against a predator in one area doesn’t mean the prey will pick up that defense in another area. It’s unlikely that US honey bees will know to swarm a hornet and cook the hornets to death, since our bees haven’t evolved that defensive adaptation.

As a result, the Asian giant hornet has been “very destructive” to the areas they’re introduced to, as we’ve seen with European beehives, according to entomologist Joe Boggs in an interview with Ohio State News. If Asian giant hornets devastated a Washington state beehive like they’re suspected to have, they could do the same in the US.

Should I be (even more) concerned about North American honey bees? As of right now, no. As a Northeastern University news article says, you shouldn’t be worried about the hornet unless you’re a bee. We’re not even sure if they’re established enough in the US to cause much of a threat, according to a fact-checking article from Reuters. If they do establish, though, they could threaten our existing beehives, environment, economy and public health. But since there’s no evidence as to whether the Asian giant hornets introduced here will breed, it’s best to just mourn the loss of fallen honeybees and hope murder hornets don’t spread throughout the US.