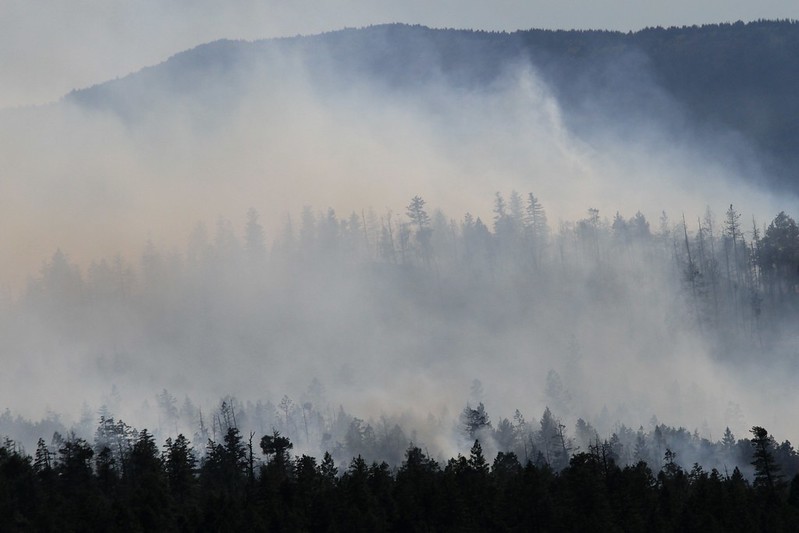 Five of the six largest wildfires in California history started this year — researchers are still learning about the health impacts of all that smoke. [Credit: Jeremy Hiebert, flickr | CC BY-NC-SA 2.0 ]

Smoke is smoke, right? Not necessarily, say some experts.

Inhaling wildfire smoke can be harmful, but smoke from unintended wildfires may be worse than smoke from prescribed burns, according to a study published in 2019. That means the health risks from wildfires — like the ones that have destroyed millions of acres and turned the sky blood orange this fall in California, Oregon and Washington — might be prevented by implementing prescribed burns.

When comparing how smoke from wildfires and prescribed burns affected children, “we saw worse effects from the wildfire,” says Dr. Mary Prunicki, who directs air pollution and health research at the Sean N. Parker Center for Allergy and Asthma Research at Stanford University. In a study published in the journal Allergy in 2019, her team found that children who lived near where a wildfire occurred suffered more severe respiratory and immune effects than those who lived near a prescribed burn.

It’s an important comparison because prescribed burns are a crucial tool for reducing wildfire risk. And while support for prescribed burns has increased in recent years as wildfires have worsened, there is still plenty of skepticism from the public about burn safety.

Environmentalists say they understand why this skepticism lingers. “No question, smoke sucks,” says Craig Thomas, a longtime California forest activist. Still, he adds, “fire is part of the deal out here.” And he mentions that Indigenous groups have long employed the practice, which restores biodiversity while also lessening wildfire risk. But starting in the 20th century, forest managers —  trying to protect the forests — suppressed fires, leading to a buildup of brush and grasses which became fodder for the record-breaking wildfires of recent years.

Thomas runs the Fire Restoration Group, which advocates for prescribed burns to revitalize forest ecosystems and lower the risk of raging wildfires. The real question, says Thomas, is this: “How can we reestablish fire back in our system and do the best job we can of protecting public health?”

Most of the health effects of smoke are caused by tiny particles called PM2.5, particulate matter that is less than 2.5 microns wide, or about 1/20th of the thickness of a human hair. These particles can drift hundreds of miles and lodge deep within the lungs — and they are especially damaging to vulnerable populations like asthmatics, children and the elderly, explains Fabienne Reisen, who studies the chemistry of smoke at CSIRO, Australia’s national science agency.

While all smoke contains dangerous PM2.5, the Stanford study is one of the first to try to discern the differences in health effects between smoke from wildfires and smoke from controlled burns, according to Prunicki.

Children near the wildfire were more likely to report an onset or worsening of asthma or other respiratory symptoms. They were also more likely to have decreased levels of inflammatory T cells, meaning their immune system was weakened, according to Stanford’s Prunicki.

To explain the different outcomes, Prunicki points to the difference in levels of PM2.5 and other measured pollutants. “If you looked at the pollution levels during the prescribed burns, they were much lower than during the wildfires,” she says.

Reisen, the atmospheric scientist from Australia, notes that prescribed burns also tend to burn for shorter periods and consume less vegetation than wildfires. “You don’t burn as much and you don’t burn as intensively,” she says.

Still, “it’s hard to quantify how much of the health impacts you save with prescribed burns versus wildfires,” says Prunicki. But with additional work, she hopes to be able to better measure the health impacts of different types of fires. Her team is now working on a larger study to see how smoke from different sources affects firefighters.

Prunicki thinks this research will become even more important as climate change continues to play a role in a worsening wildfire season. Because of climate change — and our avoidance of prescribed burns — “wildfires have increased in size, duration and intensity,” Prunicki says. And with that comes an increased health risk from smoke. “I don’t think people are aware of how much it’s impacting our health,” she says.

Casey writes about the environment, public health, and materials science. When not on deadline, you can find her tending to her small army of houseplants, running, or watching college football.