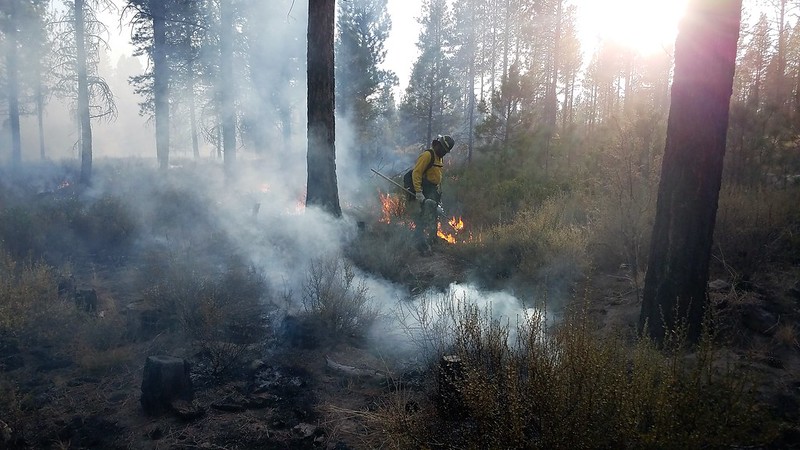 A student learns about prescribed burns during a training session for community members and firefighters in central Oregon. [Credit: Lisa McNee/Bureau of Land Management | CC BY 2.0]

The human-caused wildfires that once burned in coastal rainforests

Before white settlers spread over the American West, more than 4 million acres of land burned each year in what is now California. Lightning sparked some of those fires. The region’s Indigenous peoples lit the rest.

Now, as the United States’ worst recorded wildfire season continues to blaze, some are calling for a return to purposeful fire — and for more diverse groups to manage the land with fire.

“Climate change has contributed to the severity of these fires. But we can’t ignore the fuel that has built up,” says Jackie Fielder, who was a candidate for the California state senate this year and is a member of the Mandan, Hidatsa and Arikara Nation. She proposed an Indigenous Wildfire Task Force, which would bring together tribal, local, state and federal officials to manage wildfires in a way that’s informed by Indigenous practices.

California’s Indigenous peoples have long used traditional prescribed burns, set under carefully controlled conditions, to reduce fuel for large wildfires and promote healthy ecosystems, says Don Hankins, a professor of geography and planning at California State University and a practitioner of his Plains Miwok cultural traditions, including traditional burning. In fact, native plants such as oak trees have evolved to withstand smaller fires, and animals like elk thrive in open spaces created by burns.

But for most of its history, the U.S. government aggressively suppressed fires, including Indigenous communities’ traditional burns, says Fielder. Today, the landscape is not only increasingly dry due to climate change, but it is also unnaturally clogged with vegetation. This fuels wildfires like this year’s, which have caused $1 billion in damage across the West, according to the National Oceanic and Atmospheric Administration.

The country is now slowly coming around to the idea of prescribed fires. In 2019, government agencies — as well as tribes, nonprofits and other landowners — set 181,000 prescribed fires across 6 million acres. Although the number of fires and the acres they cover vary year to year, the overall trend over the past 20 years has been an increase. In 1999, the United States set 5,900 fires over a little less than 2 million acres.

But even this increase isn’t enough. “A few acres here and there isn’t going to cut it. We need to be creating more of a mosaic in the landscape with fire,” says Hankins.

Last year’s 6 million acres were spread across the whole United States. California alone may need to burn a backlog of 20 million acres to prevent further catastrophic wildfires, according to research published this year in Nature Sustainability.

To address all the built-up fuel “is going to be an all-hands-on-deck effort,” says Becca Shively. She manages a program at the Rural Voices for Conservation Coalition, which aims to demonstrate how burn agreements between community organizations and the U.S. Forest Service can work successfully. After all, the Forest Service doesn’t have the staff or budget to do enough prescribed burns on their own, she says.

A 2019 survey of Forest Service and Bureau of Land Management staff in 11 Western states backs this up. Lack of funding and a shortage of qualified people are the main barriers to doing more prescribed burns, according to the majority of staff surveyed.

Community organizations like the Watershed Center in Hayfork, California are filling part of the gap. Originally founded to train out-of-work loggers in new careers, the organization now conducts prescribed burns for local landowners, with cooperation from the Forest Service.

Along with two similar nonprofits in Washington and New Mexico, the Watershed Center provides an existing template for cooperative burn agreements, Shively says. Her coalition plans to study these examples and propose a standard set of policies the government can use to create more agreements with community organizations.

Prescribed burns are becoming more popular, according to both Shively and Hankins. But groups lighting planned fires still have to navigate official regulations and locals’ concerns about air quality. They also have to minimize the potential for fires to burn out of control, accounting for weather conditions like wind and moisture.

Experienced tribal practitioners have the knowledge needed to burn not just safely, but for specific ecosystem benefits, says Hankins. He notes that one of several factors driving extreme fire seasons seems to be the proliferation of non-native grasses, which dry up and burn early. Native perennial grasses, on the other hand, stay green and resist burning later in the year. The region’s Indigenous peoples used fires carefully timed to the seasons and to plants’ life cycles to cultivate these native grasses, he says.

Hankins points to efforts like the Indigenous Peoples Burning Network and Prescribed Fire Training Exchanges (TREX), which runs hands-on prescribed burn training sessions, as good starts to bring back these practices. Since 2014, the Karuk and Yurok tribes in northern California — two of more than 100 tribes in the state — have partnered with TREX to conduct burns on their land. Aside from reducing wildfire risk, the Karuk and Yurok people now once again use fire to manage the plants and ecosystems essential to cultural traditions like basket-weaving.

Fielder lost the state senate election to her opponent Scott Wiener, but Wiener has praised her idea of an Indigenous Wildfire Task Force. Following the election, he told the San Francisco Examiner he would support the effort if it moves forward.

Although Shively’s project doesn’t specifically include Indigenous tribes, she hopes the coalition’s work can clear policy and administrative barriers for all kinds of groups to collaborate with the federal government on prescribed burns.

“There’s been bad fire seasons in the past, but this one just seems to take the cake,” she says. “It’s really increasingly clear that this is everyone’s problem.”