How does recycling using enzymes work?

Enzymatic recycling might offer a new method of recycling water bottles and other plastics, researchers say 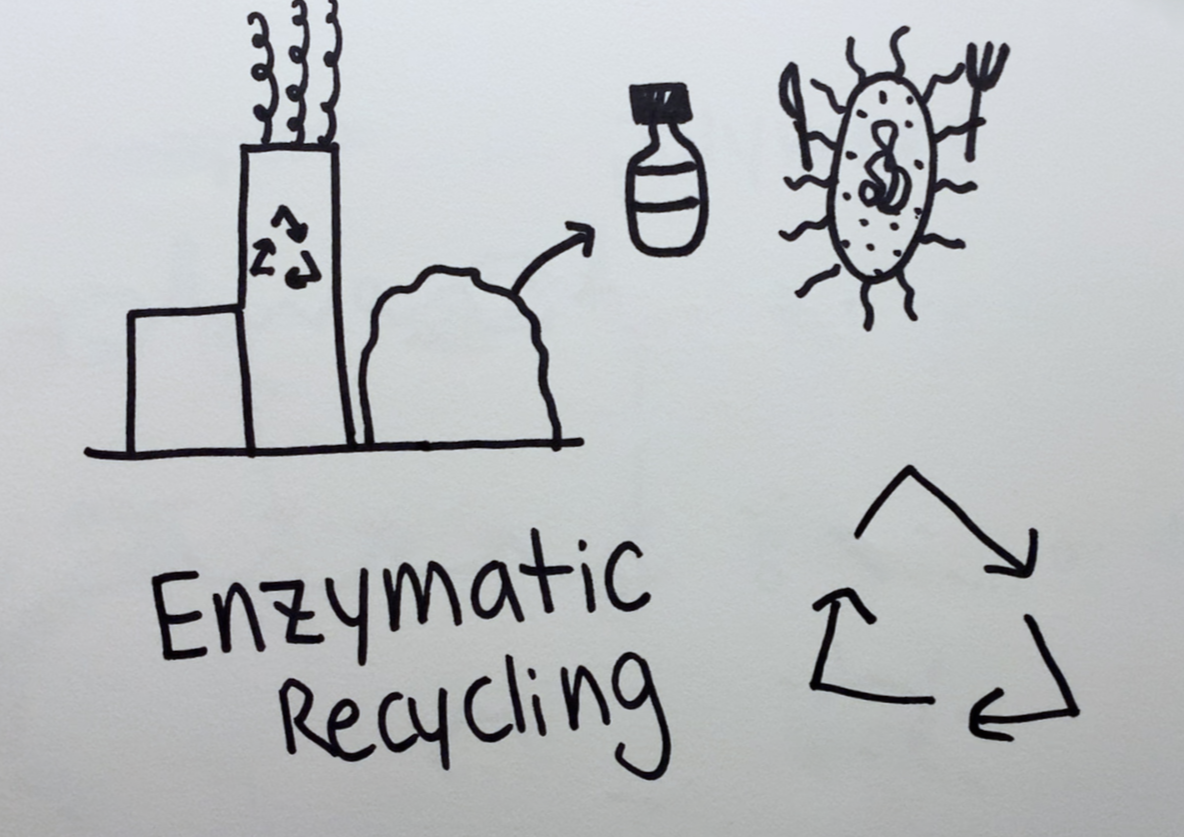 Our plastic obsession is changing the Arctic

Recycling plastic requires a big team — from people disposing of used plastic containers in the correct bins, to the workers transporting it to recycling plants, to companies using recycled plastics in their products. All these people might soon have a new member on team recycling: bacteria.

Some researchers and companies are trying to use bacteria to recycle plastics in a new way. The process, called enzymatic recycling, employs enzymes that were initially produced by these bacteria to break down the plastics. Researchers have recently learned more about how these enzymes work, and are developing ways to employ them in commercial recycling programs.

So, how does enzymatic recycling work? And how is it different from the way we recycle plastics today?

Casey Crownhart: Outside a plastic recycling plant in Osaka Japan, researchers were on the hunt for bacteria. The group searched high and low, collecting hundreds of samples. They looked everywhere from the dirt outside the plant to the wastewater system. They finally found the holy grail, a species of bacteria, which they later named Ideonella sakaiensis. This bacteria had a very unusual diet: plastic bottles.

Since the group published their findings in 2016, many researchers have been trying to figure out if we can use the appetite of this bacteria, or others like it, to recycle plastics in a new way — a process called enzymatic recycling.

Plastics are made of long-chained molecules called polymers. There is a huge variety of plastics in the world. The plastic in water bottles is made of a polymer called PET, which is colorless, strong and versatile.

Polymers can be found in nature, too. Polysaccharides, a type of carbohydrates, for example, are natural polymers. They are made of simple sugars like glucose, which are strung together into long chains.

Bacteria, fungi and animals all make enzymes — tools to break down natural polymers into their building blocks — which are then used for energy.

The researchers at the recycling plant were surprised to find this bacteria using its toolkit in a new way. But if you look a little closer, it wasn’t hard to see why these hungry microbes might have turned to PET.

Researchers think that the bacteria at the recycling plant evolved to make some tweaks to their digestive toolkits so they could adapt to this new food source.

Since the original discovery of the bacteria, researchers have purified the enzymes, and others like them, and have used them to break down PET in the lab. Some companies have started using enzymes to recycle PET-based plastic too. A French company called Carbios announced in February 2019 that they made the first bottles from PET that had been recycled with enzymatic recycling. The company still needs to scale their technology to use it commercially, but they say they hope to be operating around 2025.

If you’re thinking: “Wait a second. Don’t we already know how to recycle water bottles?” Well, you’re not wrong.

About 30% of the PET used in plastic bottles in the US each year is collected for recycling. In 2018, this meant that about 1.8 of the 6.3 billion pounds of PET bottles were recycled.

But enzymes are not the method of choice — not yet, anyway. Instead, the traditional process for recycling PET is mechanical recycling. Instead of breaking down the polymer chains into their building blocks, mechanical recycling relies on heating up the polymer so the chains can move around. Then, the chains can be reshaped into a new material, sort of like if you melt an ice cube, then freeze it again into a new shape.

But researchers say there are a few main problems with mechanical recycling. First, it can be hard to remove other things that end up in the plastic mixture, like additives that are in the original material or just other objects that get mixed up in the recycling bin.

Second, at those high temperatures required to melt the plastic, the polymer chains can break, resulting in a material that’s not as strong or durable as the original was.

These challenges mean that recycling can take a lot of time and effort, and money. Recycling is usually more expensive than just putting material into a landfill, although cost can vary depending on where you are in the world.

Because of these challenges, very few companies recycle the PET from water bottles into new water bottles, which need to be extremely clean and pretty durable. Although some companies have found ways to use recycled PET in water bottles, most of it ends up being used in things like carpet and clothes, and most water bottles have to be made from new — or “virgin” — plastic.

Some researchers say that enzymatic recycling is a better way to recycle because breaking plastics all the way down to the building blocks, purifying those and then rebuilding the polymer means that recyclers have more control over the final product, making sure it’s safe and strong.

But enzymes probably aren’t going to take care of all the different plastics in your recycling bin anytime soon. Some plastics we use are easy to recycle with traditional mechanical recycling Others aren’t so easy. Enzymatic recycling won’t suddenly make these difficult plastics more recyclable, though. Most plastics, besides PET, have bonds that are more difficult to break down with enzymes because they don’t look as much like natural polymers. So bacteria don’t have enzymes in their toolkit to break them down.

Enzymatic recycling won’t solve some of the other problems with recycling either. Recycling requires a lot of energy, for example, to run the machines that are used to process the plastic. In most parts of the world, that energy is produced with fossil fuels.

Cost is also a concern. Enzymatic processes might cost a lot to run. However, it’s hard to tell exactly how the economics will work out because the technology is still so new.

Another issue, regardless of recycling method, is collecting the materials in the first place. Remember that 30% of plastic bottles in the US are collected for recycling each year — the rest end up in landfills. Plastics can’t be recycled if they don’t make it into the recycling bin in the first place.

There are still a lot of challenges to tackle when it comes to recycling. But maybe someday soon, enzymes will be a part of the solution.

Disclosure: The author was a professional colleague of Dale Handlin in a previous role.

Casey writes about the environment, public health, and materials science. When not on deadline, you can find her tending to her small army of houseplants, running, or watching college football.