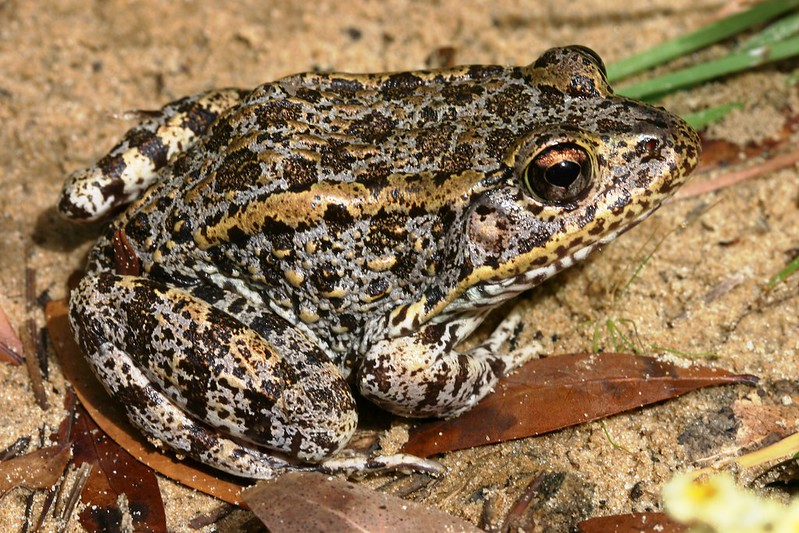 In January 2021, while the human world grappled with rising death tolls from COVID-19, another virus was spreading through small wetlands in northeastern Florida. It worked fast and efficiently to kill its soft-skinned victims: amphibians.

The local wetland frogs succumbed in just a few weeks to this ranavirus, which kills amphibians by causing organ damage. Researchers at the University of Florida recorded 500 dead gopher frog tadpoles and dozens of striped newts with signs of disease in a new study. Both of these species are considered at risk of extinction. This was the first time a mass-mortality event from ranavirus was confirmed in this region for gopher frogs, which only live in the southeastern United States.

Yet this deadly event was just a blip in a larger global pattern of amphibian die-offs from pathogens. From Florida to Yellowstone National Park, and across the pond to the wetlands of Spain and Portugal, populations of frogs, toads, salamanders and newts are declining from fungi, viruses and bacteria. Tracking these outbreaks and preventing new ones remains a challenge for disease ecologists. But a combination of prevention and swift actions to contain early infections may hold hope to stop species from disappearing.

In the 1970s and ‘80s, researchers began noticing a trend of declining amphibian populations around the world. Frogs and toads were becoming sick from emerging fungal and viral infections. While scientists had previously identified these pathogens, which are natural parts of an ecosystem, some were recorded for the first time in new geographic locations. What was it about the current conditions that were leading to these die-offs?

There are several theories, and no single answer. The immune system of amphibians is influenced by amphibian behavior, environmental conditions, local ecology, genetics and more. Any of these factors could lead a frog population to become more susceptible to disease. Jesse Brunner, an amphibian disease ecologist at Washington State University, urges caution when drawing definitive conclusions between one impacting factor and a disease outcome. There is still a lot of uncertainty, he says, between multiple factors that each put stress on a complicated amphibian immune system.

“Pardon my French, this shit is hard,” says Brunner, who was not involved in the Florida study. Brunner’s research uses mathematical models to help describe, track and project disease conditions in amphibian populations. Ecologists think ranavirus originated in fish and made its way to amphibians and reptiles. In frogs, it mostly affects the tadpole phase.

For the Florida ranavirus project, biologists from the University of Florida trekked out to a research pond at the Ordway-Swisher Biological Station. They captured various tadpoles, frogs and newts by hand or by sweeping the tall grass and pond water with long dip nets. Back at the lab, the team swabbed the amphibians’ skin and used molecular methods to test for pathogens. If a specimen was already dead from disease they performed a mini autopsy. They also counted, weighed and tried to determine the sex of each amphibian.

Using a microscope, they recorded changes in the amphibian tissue from disease. This thorough analysis clearly links the tadpole deaths to disease from ranavirus, says Amanda Duffus, an infectious disease biologist at Gordon State College who specializes in ranavirus. Duffus was not involved in this study.

It can be difficult to track disease over specific geographic areas because outbreaks are often confined to relatively small wetland locations. And once an outbreak takes hold, it can very quickly spread through a wetland population. The carcasses of frogs and tadpoles break down in the muck after only a few days, dissolving at the scene of the crime. In the case of the Florida study, researchers were able to spot the ranavirus infections because they returned to the same pond in three months.

One reason for the proliferation of pathogens is amphibians’ natural behavior to congregate together. These pathogens spread through water and skin contact. During breeding events, amphibians crowd into small ponds and refuges, which makes disease transmission more likely.

“Just like putting ten people in a room, it’s like a cesspool,” says Arik Hartmann, a herpetology researcher and the lead author of  the Florida study. In the Florida virus outbreak, gopher frogs and striped newts were concentrated in tiny wetland ponds that dot the state’s northern pine forest landscape.

Infectious diseases also spread easily among amphibians due to the loss of suitable amphibian habitat around the world. This can force amphibians to congregate in smaller, remaining wetland areas, thus increasing disease transmission. Sometimes fish are added to wetland ponds for fishing hobbyists, says Brunner, and amphibians are tasty food for fish. To escape predators, amphibians will concentrate at the edge of ponds where fish can’t survive.

When an amphibian population has already experienced tremendous loss from disease, any one of these stressors can be the breaking point for a species. As more and more amphibians die from infectious diseases, scientists worry that some species could even go extinct. 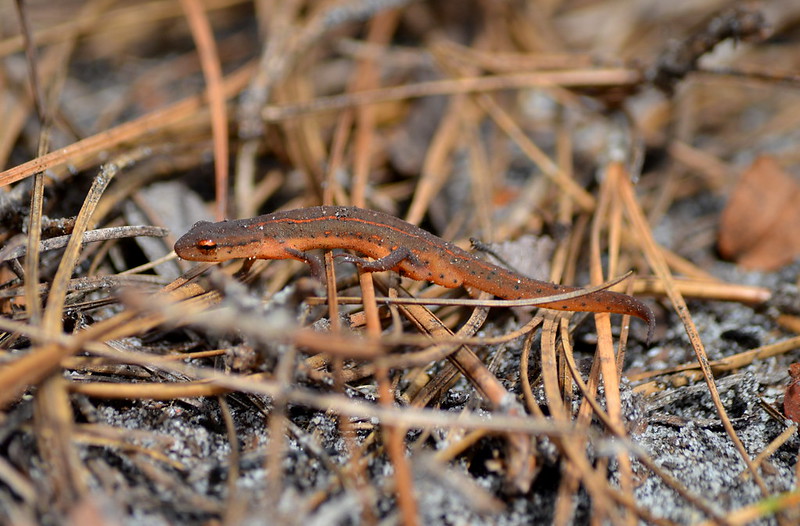 The gopher frogs and striped newts limited to the southeastern U.S. are some of these especially vulnerable species. In the case of the striped newt, populations have declined in recent years likely due to drought. The presence of ranavirus may be another clue as to why populations have not increased despite conservation efforts by the Fish and Wildlife Service, says herpetologist Hartmann, and may indicate that the newts need additional protections from the Endangered Species Act.

Infected gopher frogs could also sicken other species because these frogs make their homes inside burrows carved out by gopher tortoises. This proximity between species could potentially lead ranavirus to fatally spill over to the tortoises, a threatened reptile that digs out long tunnels which provide habitat for more than 350 other species.

This kind of pathogen spillover regularly happens between other animals that share habitat. Ranavirus spread between amphibians and reptiles has been recorded in North American box turtles. There is also evidence of amphibian-to-snake ranavirus transmission in Spain, where water snakes were infected after an amphibian outbreak in the same habitat. Ranavirus may already be circulating in Florida but is not known to be increasing in gopher tortoises yet. That’s what Hartmann’s next research project aims to find out.

“Gopher tortoises are huge on my radar,” says Hartmann. “We just got permits to expand our work to see if a gopher frog, who’s come down into the pond to breed, gets infected with ranavirus and then takes it home [to the tortoise burrow] and kills everybody else, all his roommates,” he explains. A familiar concept in the age of COVID-19.

The growing wildlife trade fuels disease spread too. Wild amphibians from Southeast Asia and elsewhere are sold as pets. There is nearly no regulation or testing for disease in the U.S. amphibian trade, except for 20 types of salamanders that are considered “injurious” to other wildlife because they carry a fungus known as B. salamandrivorans, says Matthew Gray, a professor of wetland and disease ecology at the University of Tennessee.

If a diseased pet is released into the wild, it can spread its fungus or virus to populations that have not evolved to live with the pathogen, says Gray. And there are a lot of amphibians being brought into the U.S. About 2 million amphibians for pets and breeders are imported into the U.S. annually, according to data obtained from the U.S. Fish and Wildlife Service.

Both Gray and Brunner are working with amphibian breeders, importers and pet owners to develop and encourage a “clean trade” that would minimize the potential for spreading and introducing pathogens. They say resources need to be allocated for consistent testing of amphibians that are being imported as pets. To help make screening processes easier, they are trialing eDNA methods that use small samples of amphibians to find signs of disease in an incoming shipment.

Some ecologists are hopeful that amphibian decline can be slowed. Experts say that consistent monitoring of amphibian populations is the best way to catch and track outbreaks. If pathogens are detected, a wetland can be cordoned off and the diseased species removed, says Dr. Frank Pasmans, a professor of veterinary bacteriology at Ghent University.

Public communication campaigns for recreational water users can also help, says Duffus. The Partners in Amphibian and Reptile Conservation provides information for lake and pond users on how to sanitize their boats, rafts, boots and other gear to prevent pathogen spread between water bodies.

It may come down to protecting or creating more suitable amphibian habitat to help numbers rebound. If we fix the habitat by addressing pollution and drought, these diseases may go away, says Hardman, the Florida veterinarian. It would also give animals enough space on the landscape to spread out and reduce disease transmission. “Social distancing,” she notes, “is great for animals too.”

Experts say all of these steps are interconnected. “Everything that improves amphibian conservation improves their chance of not going extinct due to infectious disease,” says Brunner.