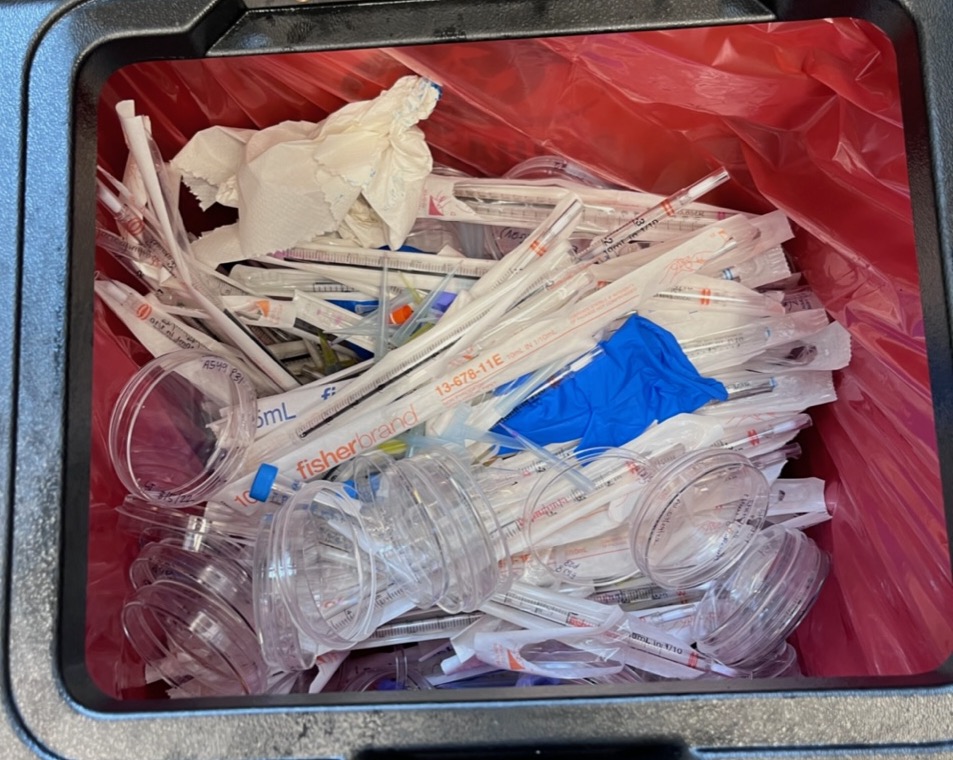 Lindsay Julio carries a stainless steel water bottle with a metal straw and wears leggings made of recycled plastic. This is how she deals with her plastic guilt.

Julio is a Ph.D. student at Northeastern University studying genetics. For Julio, reducing her single-use plastic consumption outside of the lab is a form of “absolution,” she says. Every day she flies through single-use plastic laboratory tools used for transferring and storing liquids: pipettes, pipette boxes, trays and storage bottles. Pipettes, which are shaped like thin turkey basters, can be made of glass with disposable plastic tips. Or, they can be plastic and used only once. Even glass pipettes, says Julio, may be thrown away after one use to prevent contamination.

Plastics have transformed lab research. Plastic usually costs less than glassware. For example, it’s about $72 for a couple hundred polystyrene 10 millimeter pipettes from Fisher Scientific — compared to $177 for a dozen glass versions of the same size. Plastic is lightweight, so it’s easier for workers to maneuver in the lab. Plus, it doesn’t shatter, meaning it’s safer for workers. Meanwhile, glass is heavier and requires extra protections for shipping (contributing to increased shipping costs).

Plastic is necessary for much of the daily lab work that takes place globally. One study in 2015 estimated that lab research worldwide generates 5.5 million tons of plastic a year — nearly the weight of 67 cruise liners. The authors argue that research grants should incentivize researchers to reduce their plastic waste, and even make greener lab practices a requirement for receiving funds. Yet, alternative glass pipettes and bottles can be time and energy intensive to clean. While the costs and sterility of single-use plastics might outweigh washable glass alternatives, some research professionals recognize that the plastic status quo is not the only way.

Julio isn’t alone in her sustainability mindset. When Brenda Lemos was a Ph.D. student at Brandeis University in 2018, she decided to take a survey of her lab. “I was just appalled by the amount of plastic that we [went] through,” says Lemos. She asked her lab members to put all the plastic they used into a single container to see how long it took to fill. “And the answer was not long at all,” she says.

This sparked the idea for GreenLabs Recycling, which Lemos and her partners have grown to serve the Boston area. GreenLabs is the recycler Julio’s lab at Northeastern uses. They mainly recycle pipette tip boxes which are made of polypropylene, a sturdy plastic that can withstand the high temperatures of the sterilization process. Boxes are put into a machine called an autoclave, which uses steam to sterilize reusable instruments. These boxes usually don’t come in contact with biohazards or chemicals. They just hold the plastic tips that dispense liquids. So, pipette tip boxes don’t need to be incinerated with other lab trash. These boxes make up 75% of all lab-generated waste, according to an analysis of sales data by GreenLabs and an independent study by facilities groups at Massachusetts Institute of Technology.

GreenLab’s customers, which include large pharma, biotech and academic research labs, wash and separate pipette boxes from other trash. “Scientists, we find, are more willing to do the extra step given the amount of plastic that’s used in their day-to-day,” says Lemos. GreenLabs then picks up these recyclables and grinds them into small bits. They sell this plastic to a manufacturer who mixes it with other resins to prepare it for further recycling. Long term, Lemos says they want to “close that loop” by making their own recycled products targeted for scientific use. There’s some concern, she says, about whether these materials would affect the integrity of instruments. But improvements in manufacturing could alleviate these concerns.

In Julio’s lab, GreenLabs recycles pipette boxes along with plastic bottles that hold chemicals. That’s some relief to her conscience. But when Julio tries to grow human cells for experiments, she goes through a lot more plastic that cannot be recycled for biohazard safety reasons. Cells are stored in plastic culture dishes. Julio usually grows four different cell populations at a time, so that’s four dishes that have to be replaced. During the process of changing out the growing liquid and adding new enzymes, Julio will go through at least nine plastic pipettes and their plastic wrappers. Some labs may use glass pipettes for certain steps, but even those get discarded. This process takes 15 minutes or less, says Julio, and depending on the type of cells, could happen between once per week to every day.

Replacing these culture dishes and pipettes with glass alternatives may not make sense, says Julio. It’s more labor and energy intensive to sterilize glass with hot water in the autoclave because it takes extra time for someone to operate. Julio recalls a lead investigator who would autoclave their own glass pipettes, when their time could have been spent writing grants and thinking of new research. Plus, the autoclave requires electricity to heat hot water and create steam, potentially increasing the energy costs for the lab.

Still, some labs have successfully reduced their plastic and overall waste consumption while decreasing costs. A chemistry lab in Ireland reduced their disposable plastic use by 69%. And, according to the lead researcher in an interview with Nature, they saw some big cost savings by switching storage containers from plastic to compostable alternatives.

In addition to reducing overall plastic consumption, some labs are focusing on reusing materials. At Harvard University, labs can donate used equipment to colleagues. Gel ice packs can be recycled or reused, and there are buy-back programs for styrofoam sample coolers. The University of Colorado Boulder offers recycling programs for several plastic laboratory items that would otherwise go to a landfill.

These efforts account for recyclable and reusable plastic. Yet currently, equipment that comes in contact with potential biohazards, like pipette tips, will never be recycled. Until the closed-loop day comes, Julio will continue to use pipette tips at work, and drink through her metal straw at home. “If we could all mitigate our unnecessary plastic use,” says Julio, “it would feel easier to justify the use of single-use plastic where it actually serves a purpose.” And perhaps alleviate some of that guilt.