Watching the game might get your heart beating as fast as playing it. 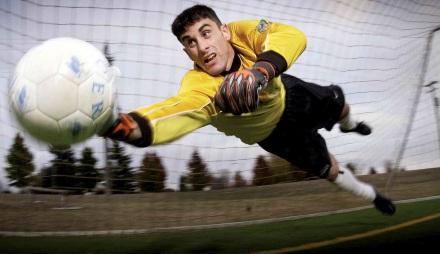 Soccer’s 2006 World Cup is history. The din of the cheering crowds has died down, the players have left the pitch, and the global fervor has subsided. But scientists in England are just now putting the finishing touches on studies they conducted on the tournament’s television spectators, and they’re finding some surprising results.

Researchers at England’s Loughborough University found that supporters cheering on their teams during the World Cup experienced significant physiological changes during matches.

“You’re getting an increase in heart rate that is produced through emotional involuntary stimulation and arousal,” said lead researcher Mike Gleeson, a professor of exercise biochemistry at Loughborough University.

Rather than being a healthful rise in heart rate, Gleeson said that this level of excitement could be dangerous for some people. “It would increase the risk of heart attack in sedentary individuals,” he said. “It’s a big problem when you think of the number of people who watch sports.”

Billions of viewers in more than 200 countries tuned in to the 2006 World Cup. According to the international sports marketing company Infront Sports and Media, European audiences smashed previous records for watching televised sporting events.

The Loughborough team’s study was inspired by research that examined the public health impacts of an infamous loss in English soccer lore. In the second round of the 1998 World Cup, England lost to Argentina after a dramatic penalty kick shoot-out. In the days that followed that match, hospital admissions in England for heart attacks shot up by 25 percent above the normal rate, according to a 2002 study published in the British Medical Journal. “You get an enormous emotional investment,” said Doug Carroll, a professor of applied psychology the University of Birmingham and the lead author of the 2002 BMJ study. “[The tension] was almost tangible in that game,” he said of the match, which was watched by an English television audience of 22 million.

In the new study, Gleeson and fellow Loughborough professor Ron Maughan also found increases in cortisol, a hormone associated with stress, in the bloodstreams of their test subjects. These rises in cortisol, which is produced by the adrenal gland under stressful situations, occurred in concert with speeding heart rates, according to Gleeson.

The highest heart rate recorded during the study was more than 160 beats per minute. It belonged to Henrik Gerdin, a 25-year-old Swedish fan, as he watched his team tie the score in the late stages of a crucial match against England. This rate is similar to the average heart rate of a soccer player during a match, explained Gleeson. “You’ve got to be pretty aroused to do that,” said Maughan.

And this kind of stationary arousal, said Gleeson, can be detrimental because it is not accompanied by any of the muscle contraction or increased oxygen intake that physical exercise entails.

The study was conceived and funded by the online gambling website www.betfair.com. All of the trials were conducted at Betfair’s corporate offices in London. Gleeson and Maughan tracked 50 people – ten England supporters and ten supporters of England’s opponents – over England’s four opening round matches. The researchers fitted each spectator with a heart rate monitor, which took readings continuously throughout the matches, and they measured cortisol levels using a saliva test at the beginning, halftime, and end of each match.

Betfair gave each participant £100 (about $190 US) at the beginning of each game. Half of these supporters were instructed to bet this amount on the game they were watching with the possibility of either losing their £100 or winning up to £2000 (about $3,810 US).

Gerdin, the Sweden supporter, was one of the big winners. Although he was by far the most excited fan, in general betting did not affect the spectators very much. “Having a bet on it doesn’t seem to have any additional effect on the physiological response or the perceived level of stress,” Gleeson said.

Instead, the researchers said, spectators were responding to the events unfolding during the game on a deeper emotional level. “It’s a personal attachment to the players and teams on the field,” said Maughan.

Though Gleeson and Maughan suggest that watching soccer matches may put unhealthy people at an increased risk for coronary events, they say that this should not cause fans to tune out. “Out of millions of people who watch every Saturday or Sunday, a vanishingly small number of people will have adverse effect,” says Maughan, explaining that most coronary events provoked by the excitement of watching sports were probably bound to happen anyway. Gleeson adds that the adverse psychological effects of prohibiting oneself from watching sports could cause additional stress that might outweigh the possible danger caused by the emotional excitement and stress of watching the big game.

The researchers hope to publish two separate papers from their study: one on the reactions of fans over all four of England’s first round matches, and one focusing on the eventful match between England and Sweden in which the most dramatic changes in heart rate and cortisol levels were recorded.

Gleeson and Maughan plan to conduct more in-depth studies during upcoming major soccer matches, such as the 2008 European Cup or the 2010 World Cup. In addition to increasing the number of spectators they monitor, they plan to track other physiological measurements like blood pressure, and to record more detailed psychological information for each fan.