Pirates of the Cinema 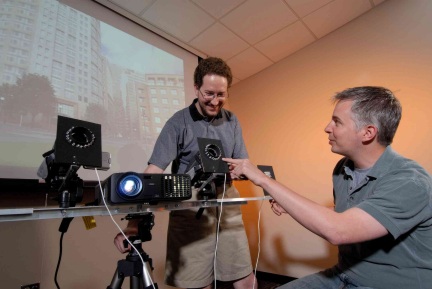 Just a few weeks ago, FBI officials busted two New York piracy rings before they could film and sell the newly released “Superman Returns.” But it took three years to catch the pirates, who meanwhile turned a hefty profit off their illicit merchandise.

Movie groups like the Motion Picture Association of America have long been looking for better and faster ways to catch these thieves, and computer scientists at the Georgia Institute of Technology may have developed just the ticket: a device that could catch movie pirates before they even get through the opening scene.

In 2005, major motion picture studios lost $6.1 billion to piracy, according to an MPAA study, and the worldwide film industry lost almost three times that. And while DVD ripping is also a major problem, it’s “less painful than seeing ‘Superman Returns’ on the streets the day after it’s released,” said Fleming.

The device created by Georgia Tech researchers may help prevent these illegal recordings by detecting digital video recorders in theaters. All digital cameras have image sensors called charged-coupled devices that retroreflect, or bounce light back to its origin. (This same property is used in the lettering on stop signs, on construction vests and even some running shoes.) CCDs are good detection targets because “there’s very few things that retroreflect,” said Jay Summet, a research assistant in computer science at Georgia Tech.

Infrared light is beamed out of the device to scan for CCDs, and any reflective signals within range bounce back to the system’s detectors. A computer analyzes the signals to rule out objects that are reflective but not retroreflective, like jewelry, and things that are too big to be cameras, like construction vests.

Once a signal is confirmed to be coming from a video camera, the device sends out pulses of light in varying colors and patterns that confuse and overwhelm it. Features like white balance and auto focus aren’t built for such rapid changes in light conditions, so the pulses render the camera images useless.

But don’t worry; if there were a pirate sitting near you in a theater, you wouldn’t be blinded by the flash of light. The light emitted by the detection system is a thin, highly focused beam specifically directed at the camera. “We don’t want to infringe on the viewing experience,” said Summet.

As theaters begin to switch over to digital projection systems, the device could easily be integrated into the installation process, and at a fraction of its total cost, according to Summet. But movie distributors and theaters still have to hash out the details of who will pay for these devices.

And although this isn’t the only anti-piracy option movie groups are exploring, it could be the least labor-intensive. Other camera detection systems that have been developed simply alert a security guard or some other person who has to actually stop the filming, said Summet. And the interruption might put a damper on the movie experience for other patrons, Fleming pointed out.

Another option, he said, is to imprint movies with a digital watermark―a technology used by many studios now. But this tactic doesn’t stop pirates in the theater―it simply makes the movie traceable when it is found being sold on the streets or the Internet. “They’re looking at a lot of things,” said Fleming. “We think we’re the best.”

Brad Hunt, the Chief Technology Officer for the MPAA, said that camera “jamming” technologies like the Georgia Tech device “are probably the most attractive” option to combat film pirates. But, “there’s still some work to be done,” he said. “We don’t have any effective jamming technology deployed today.”

Right now, Summet and Shwetak Patel, a fellow researcher, are working on refining the system and the software. “Basically the next step is making the hardware cheaper and work faster,” said Summet.

The start-up company they’ve created, DominINC, hopes to start in-theater trials within a year. But according to Fleming, negotiations between movie distributors and theaters will probably delay its widespread use. In the long term, movie distributors may see this device as “a good house-keeping seal of approval,” sending their films only to theaters that have installed it, he said.

That stamp of approval may also serve as a warning: “Pirates beware.”