Unusual objects sometimes fall from the sky, courtesy of waterspouts. 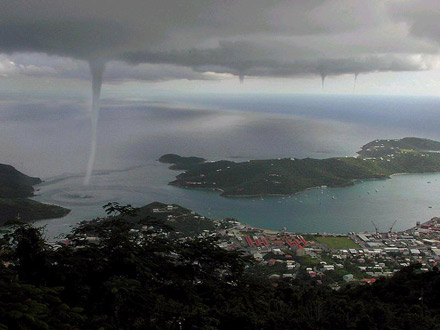 Just before last New Year’s Eve, Carl and Kathy Hennige of Folsom, California e-mailed their local newspaper to report some strange weather. It was raining fish.

Although it may sound like some sort of mythical event, the Henniges weren’t telling tales. Neither were people in Manna, India, who reported seeing live, pencil-sized fish falling from the sky in July. It can happen, say scientists. The culprit: waterspouts.

Waterspouts, which are essentially tornadoes over water, form when cold air moves over warm water. They churn at speeds up to 200 miles an hour, but dissipate when rain begins to fall from their host cloud. Depending on how fast the winds are whipping, anything that is within about one yard of the surface of the water, including sailboats or fish of different sizes, can be lifted into the air, says Nilton Renno, an atmospheric scientist at the University of Michigan.

A waterspout can sometimes successfully suck small objects like fish out of the water and all the way up into the cloud. Even if the waterspout stops spinning, the fish in the cloud can be carried over land, buffeted up and down and around with the cloud’s winds until its currents no longer keep the flying fish in the atmosphere. It’s like the fish are swimming in the cloud, says Renno. Depending on how far they travel and how high they are taken into the atmosphere, the fish are sometimes dead by the time they rain down. People as far as 100 miles inland have experienced raining fish, he explains.

Fish can also be sucked up from rivers. The Henniges’ condo is just one mile above Lake Natoma and the Nimbus fish hatchery, where they think the fish came from. Carl Hennige writes in an e-mail that there was “an enormous windstorm” just before the fish fell.

Raining fish is not a common weather phenomenon. Fewer than 10 occurrences have been reported in the past year, according to a news search, so local five-day forecasts probably won’t include fish showers. Still, people have reported such events for centuries.

In the early 1900s, Charles Fort, a collector of stories of odd weather happenings, theorized that there was an ocean orbiting the earth that occasionally dropped its creatures onto the planet, writes author Richard Cerveny in his book, Freaks of the Storm.

Now that scientists have advanced technology like Doppler radar, they are less reliant on personal accounts. Fewer people are asked to describe the odd objects they see falling from the sky, says Cerveny, who is also a professor of weather and climate at Arizona State University. Also, people are less likely to report any strange occurrences now than they were 100 years ago. Cerveny explains that today, logical explanations through science are more readily available, so there is less mysticism behind strange weather phenomena. “They tend to sound more kooky now if they report it,” he says. Even though fewer personal accounts of strange weather have not necessarily hurt meteorology, “maybe it has taken away some of the fun of it,” says Cerveny.

Stories of raining fish, frogs or even turtles are an effective teaching tool for Cerveny when he lectures or gives presentations. “Everybody in that kind of a setting loves to hear about odd and unusual weather,” he says. Sometimes after a presentation people pull Cerveny aside, saying, “Well, when I was a kid…”

So keep an eye out, because next time the clouds open up, it may be more than raindrops that keep falling on your head.

Here’s another one when I was a kid in Billings, Montana there was plant in our alley that was flat to ground and if you touched it with your foot it would shrivel up. I don’t know what it was called and I haven’t seen one sense. Do you know what it is?

https://www.youtube.com/watch?v=XTi6eDeKkQI- Mimosa pudica is a plant in the pea family that is famous for its leaflets which fold up in response to touch. This is a close up video of the leaflets folding up.

https://www.youtube.com/watch?v=BLTcVNyOhUc – Demonstration of the touch sensitive plants reactions to being touched, bumped, hit, and heated with fire as well as some fantastic time lapse videography of the plant standing back up.

Not certain if this could happen, but my friend went out to his girlfriend’s car yesterday morning Monday 8/4/2017 & they found a somewhat small Octopus laying on her car in Central Wisconsin. They took photos & sent it to my phone. He called me today & he said that his brother did some research on it & he found that yes, it’s possible for them to fall from the sky up to a thousand miles away. Is this possible? I’m totally serious & would really love to know. They live out in the country & yes it did rain here last night. In the pictures of it, it appears to be almost dry with a little moisture on it. If someone was playing a trick on them, they would have had to have taken it from a bag or something in which it should have been wet? Please, I’m not looking to post this as a comment, but would like to know if this indeed could happen. He took more photos of it & then they froze it. Thanks, Bill D.