In an age of hyper-mobility, are we more vulnerable than ever to deadly epidemics? 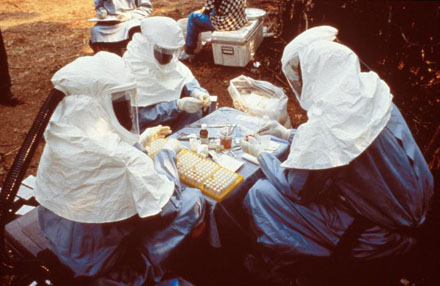 During a 1995 Ebola outbreak these CDC and Zairian scientists took samples from animals collected in Zaire. [CREDIT: CENTERS FOR DISEASE CONTROL AND PREVENTION]

Forget nuclear war, terrorism and AIDS: the biggest threat to humanity may well be a virus we’ve never seen before. So argues English doctor Frank Ryan in his terrifying call-to-arms. Although he provides what is clearly a meticulously well-researched argument, the book reads more like a piece of nail-biting science fiction.

Ryan’s storytelling is gripping. Beginning with the tale of the deadly Sin Nombre outbreak among Native Americans in 1994, he chronicles a handful of infamous outbreaks including those of Lassa, Marbug, and Ebola—all of which appeared out of nowhere, destroyed entire communities, and baffled virologists.

Ryan intersperses his anecdotes with clear scientific explanations, but his meticulous habits occasionally get the best of him: sometimes he uses jargon only a scientist would understand. The lapses only occur sporadically, though, and his compelling stories more than make up for them.

He connects his narrative stories by pointing out their common features, and in doing so he craftily introduces his thesis: virtually all species of animal life have their own viruses, most of which do not cause a problem. But when another species threatens the relationship by invading or disrupting its ecological niche, the virus, possessing what Ryan terms “genomic intelligence,” attacks the interloper.

Resident viruses that successfully infect this new host species are usually the most aggressive variants, because they have to overcome the new host’s immune defenses. This explains why new viral outbreaks frequently have devastating fatality rates. Over time, assuming that the virus does not kill all of its new hosts, infections tend to become milder and the relationship may even become symbiotic. Ryan cites measles as an example of an infection that used to be fatal but has evolved to become less virulent. HIV, he predicts, may do the same.

According to Ryan, most historic epidemics follow this trend. The Justinian and Black Death plagues erupted when populations were on the move, bringing new hosts within reach; likewise, Ebola and HIV originated in African rainforest regions that have recently been invaded and settled by humans. As populations grow and humanity expands into previously uninhabited areas, Ryan predicts that we are in for more devastating outbreaks.

What is perhaps more worrisome is that climate change and pollution could elicit these same effects too, he says, because such processes also disrupt the stability of natural ecosystems. For example, small temperature changes have large effects on the distributions of mosquitoes and ticks—carriers, or vectors, for malaria, dengue, and yellow fever. “There is a risk of no less than five vector-borne plagues returning to, or newly emerging in, the United States,” he writes.

Ryan also explains why governments aren’t doing enough to prepare for emerging virus outbreaks, pointing out that few institutions have the expertise and equipment to work with such pathogens.

Although his angle is alarmist, Ryan’s vast experience and knowledge of virology—bolstered by supporting quotes from eminent scientists like Nobel Laureate Joshua Lederberg—cumulatively settle doubts about his credibility that the reader may have.

Ryan concludes with a prediction for what might become the “Virus X” that spells humanity’s extinction. Considering the book’s publication date nearly ten years ago, his choice is eerily resonant: influenza, he says, could be our Virus X because it is one of the few viruses easily transmitted by respiratory aerosol, a route that ensures high virulence.

“Influenza, throughout history, has shown a definite and consistent pattern of repeated epidemics and pandemic,” Ryan writes. “Those historical records proclaim that another pandemic of influenza is now overdue.”

Let us hope that this idea—and the rest of his predictions—fails to come true.