I saw somewhere that pink snow exists — is this possible? 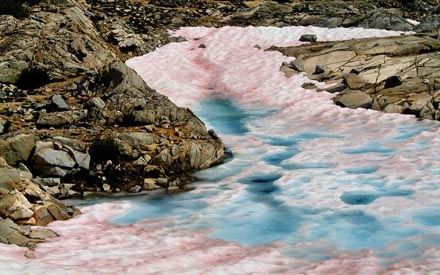 The pink color on this snow is from snow algae--the effect is sometimes referred to as watermelon snow. [CREDIT: LARS JENSEN]

Red, yellow, and green snowmen are not just the moldy leftovers of holiday candy, but can also be created due to a natural phenomenon that produces brilliantly colored snow.

Multi-hued snow, usually found in polar regions during the spring and summer months, results from dozens of species of algae. The algae, which grow best in temperatures less than 50 degrees Fahrenheit, lie dormant beneath the snow through the winter. During the spring melt, they awaken and feed off the flow of nutrients from thawing boulders, soil, insects, and trees. The algae use the fuel to propel themselves, with tail-like structures called flagella, to the surface of snow. Once they reach the top of the snowdrift, they lose their tails and compact together, creating a swath of color.

In February 2007, observers reported a smelly yellow snow falling in regions of Western Siberia that was greasy to the touch. According to experts, the yellow-colored snow that fell in Siberia was not due to algae, but another natural phenomenon. Nina Sakhanovskayda from the Tomsk chemical laboratory reported it was colored by dust from Central Asia. Dust can be carried to a height of 10-20 miles in the sky. The yellow snow covered an area where about 28,000 people live and was not harmful.

Algae-colored snow is a more common phenomenon. Single cellular algae can turn the usually white precipitation into an array of colors such as red, yellow, blue, and green. Chlamydomonas, a green algae, is the most common species found in these surrealist snowdrifts. They contain chlorophyll, a green pigment that helps plants get energy from light, but also results in green-tinted ice-crystals. Chlamydomonas nivalis contains a pink pigment that offsets the chlorophyll and causes pink snow. The orange and red-colored algae also contain chlorophyll, but their coloring comes from pigments used to protect them from ultra violet light, according to Ron Hoham, a professor of biology at Colgate University. The hues intensify when the snow compacts, leaving footprints of color behind human and animal wanderers.

Algae-colored snow is found in Greenland, Antarctica, Alaska, Japan, Europe, and China, as well as the coasts of North America and the Himalayas. For centuries colored snow puzzled people. Even Aristotle referred to the phenomenon in his writings: “…living animals are found in substances that are usually supposed to be incapable of putrefaction; for instance, worms are found in long-lying snow; and snow of this description gets reddish in color, and the grub that is engendered in it is red, as might have been expected, and it is also hairy.” (History of Animals, Aristotle)

Horace-Benedict de Saussure, an alpine traveler, physicist, and botany enthusiast, first speculated that the snow color effect had botanical origins in the late 18th century. Algologist Robert Chodat, however, was the first to examine the snow with a microscope in the late 19th century.

While fauvist flakes stumped researchers for centuries, algae was known to color other scenes such as the bright orange or green lichen that grows on trees. Algae can also live in hostile locales, such as in boiling hot springs or on the top of mountains, making algae a varied and natural pigment.

That was a very entertaining and informative article. I look forward to hearing more from this author.

I just looked up pink snow after finding it all over my yard in up state ny. Great article.