The Things They Carried

Parasites, bacteria and viruses mark the trail of human evolution. 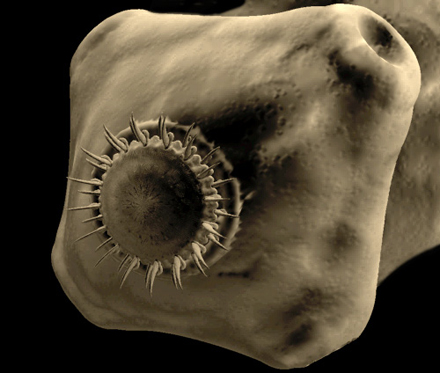 Lice, tapeworms, viruses, fungi, and bacteria have hitched a ride on the migration, colonization, and social contact that defines the evolutionary history of our species. Tracing changes in parasitic organisms complements what physical anthropologists already know about human evolutionary history from the fossil record and from studying the human genome.

“A goal of science is independent corroboration, and you can’t get more independent than another organism’s genome,” said molecular anthropologist Todd Disotell of New York University.

The organisms that evolved along with humans are quite varied:

Tapeworms were once thought to have first colonized human intestines during the domestication of grazing animals about ten thousand years ago. But a new, careful analysis of the tapeworm family tree using DNA from different species of the parasite has rewritten this story in detail. The association between the host and parasite began two million years ago when tapeworms surreptitiously infested in our small-brained hominin ancestors while they scavenged on carnivore carcasses on the African savannah. We then gave tapeworms to our livestock, not the other way around.

Many theories of human evolutionary history are rooted in the migration of modern peoples from Africa about 60,000 years ago. This migration began from a population of one to ten thousand humans –who are the ancestors of all living people –and led to both the extinction of Neanderthals in Europe and the disappearance of other human species like Homo erectus from other parts of the Old World.

Insight into the African exodus of modern humans comes from comparing the DNA of the only bacteria known to live in the harsh, acidic conditions of the human stomach: Helicobacter pylori. Research by Martin Blaser of New York University’s Medical School and colleagues suggests that Helicobacter pylori first infected our ancestors’ bellies more than 58,000 years ago when humans left Africa, making it an excellent tool for tracing human migration patterns. The global distribution of different strains of stomach bacteria follows the same splits that separated humans into four geographically distinct populations. In fact, stomach bacteria confirm that groups crossing the Bering Straight peopled the Americas since the East Asian strains infect indigenous Amazonians while the European strain is found in South American decedents of colonists.

Several viruses also followed the modern human migration from Africa. In 1993, pathogen research on the human papillomavirus at the National University of Singapore yielded a glimpse into our ancient past. Virologists discovered that this virus, a virus known to cause cervical cancer, splits into three distinct geographical lineages – Caucasian, African and East Asian.

These distinct populations were confirmed in another virus, the ubiquitous human polyomavirus that is associated with harmless kidney infections. This virus similarly splits into Asian/Native American, Caucasian, African and U.S. groupings according to research by Chei Sugimoto, a virologist at the University of Tokyo.

The human polyomavirus has since been used to tease apart genetic relationships among populations of humans from the same geographical region. For example, a group led by Hansjurgen Agostini of the University of Freiburg in Germany confirmed the distinct lineage of the Basque people of the Pyrenees when compared to other Europeans. Agostini and colleagues also found a possible link between the Basques – long thought to be a unique population because of their unusual language – and Spanish gypsies. Other virologists have used polyomavirus to figure out the genetic distinctness of different human populations, the migration pattern among the Pacific Islands, and the number of migrations humans made into the Americas from Asia.

Viruses and bacteria confirm the migration of East Asians into the Americas, but a soil fungus that causes the virulent Valley Fever tells the story of human movement within the Americas. Plant biologist Matthew Fisher of U.C. Berkeley and colleagues found that all Coccidioides immitis infections in South America are of the same strain. The South American strain shares a history with only one of the many North American varieties, suggesting that a subset of people from the north moved south about 10,000 years ago.

Head lice provide insight into an unusual part of the human saga — the time when multiple species of humans simultaneously inhabited parts of the world. David Reed of the University of Florida at Gainesville and colleagues found that head lice have two major lineages. One coincides with the modern human emigration from Africa. The second, however, is more than a million years older. In fact, analysis of louse distribution around the globe proves there was physical contact between modern humans and Homo erectus who had already populated much of the Old World. Homo erectus later went extinct.

The evolution of human pathogens is exciting to physical anthropologists like Disotell. Parasites and viruses not only confirm the human fossil and genomic evidence of our evolutionary history but could potentially answer so much of the unknown. “We may be able to do ancient DNA [tests] on parasites.” Disotell’s eyes pop ever so slightly at the possible avenues of research. “We think syphilis came from New World into the Old World, and we can now test our assumptions. And the plague – did it travel from Asia to the Black Sea to Europe?” Scientists may use ancient parasites to figure out these questions.