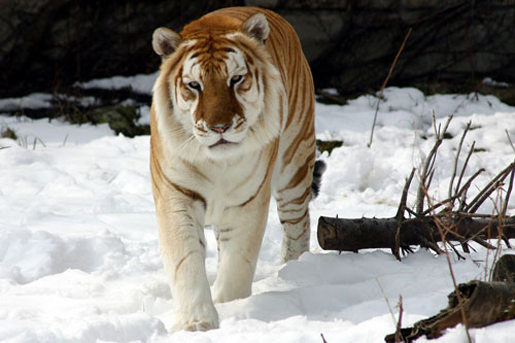 A siberian tiger in the snow. [CREDIT: CINDY HAGGERTY]

On a New York City day in mid-July, when children are popping swollen blisters of pavement tar between their toes and panting terriers let their leashes go slack, the giraffes in the Bronx Zoo might just believe they’re back on their native continent. Inevitably, the first nor’easter of the winter sprinkles the beasts with a fresh white coat of frigid reality.

As it is at most zoos, the animals on exhibit in the Bronx are full-time residents. Many of them, including giraffes and gelada baboons, are as sensitive to extreme cold as we are and must have protection throughout the winter.

The park holds species from every climate, and their treatment during the winter “depends on the natural history of the animal,” says Jose Vasquez, an animal handler at the Bronx Zoo.

Animals that are not so suited to the cold retreat to the same places they go for shade or to sleep during the summer – extensive quarters beyond the public eye where the animals can fill their bellies or laze. Such is the case with the giraffe. When the weather becomes too severe, staff in the Bronx simply bring them back into these private rooms and turn on the heaters.

For at least one animal, everything must be just so. The mole rat looks like a wrinkly sac of teeth and organs, but he is the Little Lord Fauntleroy of the zoo. Staff must maintain the temperature of these cages within five degrees of the mole rat’s comfort zone, lest the colonies suffer. “We have tons of heating systems for their colonies,” says Hope Pinckney, a keeper at the Bronx Zoo.

The jungle plants that nourish these animals thrive under filtered summer sunlight, but they remain without foliage in the winter. To keep the animals from starving in these months, zookeepers harvest foliage from the exhibit during the fall, then bag and freeze it. Winter for the gibbon and leaf monkey pretty much means a couple months of frozen dinners.

The Siberian tigers, on the other hand, most likely scoff at what we call winter. They can take very cold temperatures of up to negative thirty degrees Fahrenheit, explains Alison Werner, a tiger trainer at the Bronx Zoo.

To help ensure that they stay outside, and in order to integrate animal care with the public experience, the Bronx Zoo provides heated rocks for the tigers to lie against, which encourages them to stay sprawled outside, always in sight.

With the winter months comes more than just making sure the animals at the Bronx Zoo are living in the appropriate temperature. Law requires that zoos keep their animals happy and active with enriched environments year round, and the zoo in the upper borough works hard to ensure this happens.

For large African animals like giraffes, which are accustomed to being inside only during the night, two months can be a long time to go without stretching your neck. To make the months more bearable, animal handlers not only exercise them more frequently, but also provide different interactions to keep them occupied and interested. It can be a ball to play with, or a hollow object with food in the middle that the animal has to manipulate to get out.

Still, no matter how much attention they receive in their heated hideouts, the spring thaw must come as a relief to all of the African species living in the Bronx. Pinckney, who was there this year when the giraffes finally strode back into the sun, agreed, saying, “you can tell that they like it.”

A very informative article. It’s good to know that visitors funds are helping them keep nice and toasty in the winter.

Q: Do you think it’s important that the Senate consider this legislation as soon as possible?
A: Absolutely! So we are votih yes.

how do u guys excersiz he giraffes?.And what animals cant be out side during the winter months

@Erica – There are “enrichments” programs for the giraffes. What does this mean? Since they (giraffes) are very intelligent animals which requires plenty of interaction to keep them healthy, they are given specific task for them.
http://www.youtube.com/watch?v=JNhKasFnFM8

If you visit YouTube and seef “giraffe enrichment” you should see exactly that is being done or take the time to stop by your local zoo. During cold seasons, go early in the day when the animals are playful and warm as when it get windy, they will move to a more private area to keep warm.

This is very informationable and I thank you for the info

This is the best set of info on animals that I have ever gotten. What would I do without you? ;)