AIDS by the Numbers 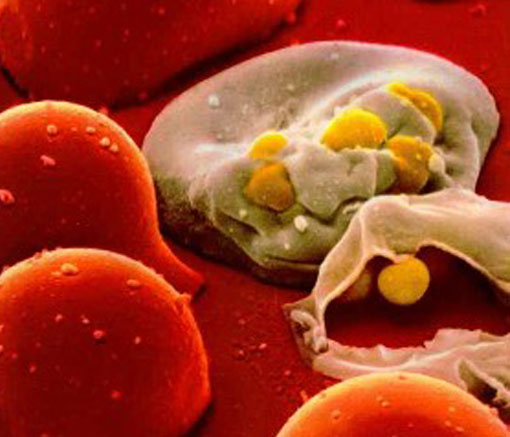 A microscopic view of a cell infected with HIV [CREDIT: csend.hu]

The effort to produce an AIDS vaccine is gathering steam, and Beryl Koblin is at the forefront. As head of the laboratory of Infectious Disease Prevention at the New York Blood Center, Koblin has been working on an experimental vaccine that might someday prevent or stall HIV infection. But no petri dishes clutter her office of books and papers: Koblin’s work is the research of numbers.

“We rely a lot on computers, because we’re basically collecting data from people rather than collecting it from test tubes,” she said. She left hands-on biological research after deciding that she wanted a more people-oriented position. She got her doctorate in public health at Johns Hopkins University, where she studied the use of the DTP (diphtheria-tetanus-pertussis) vaccine in premature infants. “[Vaccines are] probably one of the best public health interventions that have ever come along,” she said. Now, with her work on the HIV vaccine, she feels like she’s come full circle.

Koblin was still in graduate school in 1981 when the CDC’s Morbidity and Mortality Weekly Report described an unusual set of symptoms appearing in gay men, which later became known as AIDS. One of her first projects at the New York Blood Center, where she has worked for almost 18 years, involved working on preliminary vaccine trials. She worked on tracking infections, understanding the associated risk behaviors and finding out what potential volunteers’ concerns might be about a vaccine trial.

Koblin has also worked on studies assessing the effectiveness of different types of HIV risk reduction counseling and how to inform potential participants about HIV vaccine trials. Whatever the trial, Koblin and her colleagues encourage the study participants to take risk reduction measures, such as condoms and clean needles. The researchers assume that some study participants will not always protect themselves – creating risk that might be mitigated by the vaccine.

“If education and counseling was 100 percent, then we wouldn’t need a vaccine,” Koblin said.

She also noted the importance of informing HIV-negative participants that they can’t get the virus from the vaccine. Apprehension about catching AIDS from the vaccine is a common concern among potential trial participants. The vaccine is not made from complete virus, or from HIV-infected human cells—vaccine recipients are never exposed to the whole virus and therefore can’t contract the disease.

The New York arm of the Blood Center’s vaccine trial program runs two trials. One evaluates the vaccine’s safety. The other will provide additional safety information and evaluate the effectiveness of the vaccine. Neither trial has the final word: more research will be needed before a vaccine is licensed.

“I think we are as close as a few years to many years to finding a vaccine that might have some efficacy,” said Koblin, noting that there are some promising vaccines currently in trials and some about to begin testing.

According to recent statistics from the CDC, 2005 brought more than 40,000 newly diagnosed infections with HIV/AIDS in the United States. “I think public awareness [of AIDS] has really dropped in a lot of ways,” she lamented, “because I think there’s a sense that it’s not a problem here in the United States anymore, which I would argue is not the case at all… in other countries, it’s devastating.”