Can physics solve the mystery of avian flight? 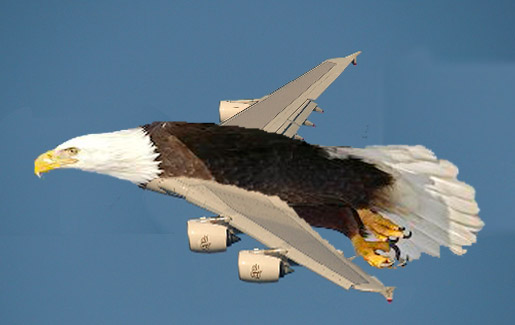 It’s four o’clock on a snowy Friday afternoon, and two researchers at NYU’s Courant Institute of Mathematical Sciences are trying to simulate flight in a vat of water. Their device consists of two rectangular metal “wings” attached to a thin submerged metal rod. Before starting the experiment, postdocs Benjamin Thiria and Lionel Moret, fiddle several times with the knobs on a camera they’ve set up to film the simulation.

Thiria fills a large beaker with water and dumps it quickly into the vat, causing bubbles to form all around the device. Adding bubbles to the system is like throwing dust on a ghost; it visualizes movement in the water that would otherwise be invisible. As the wings on the device undulate rapidly through the water, the bubbles trace the swirling currents around it. Thiria and Moret can then use a laser and a digital camera to translate the image of the bubbles to a computer screen. Their goal is to model the motion of flapping wings and the air currents around them in order to figure out the physics behind avian flight.

Moret and Thiria look at the bubbles through a green laser to make sure they’re visible, then check the computer screen. Neither of them looks satisfied. Thiria goes back to the sink for more water. Forty minutes later, they’re still trying to get the bubbles to show up properly on the computer screen when Jun Zhang, their mentor and expert on the physical phenomenon of flapping, comes into the room. He bends down so he’s level with the laser. “Yeah, I don’t see much,” he says. But he commends their new method of producing bubbles. “It looks quite nice.”

Zhang first conceived this project 7 years ago, along with his NYU colleague, Stephen Childress. He’s published studies on the physics behind flapping in flags and fish fins, but this is his first time looking at the phenomenon in birds, which he says is much more complicated. Although scientists and engineers understand the basic principles of how birds flap their wings, the mechanics of how all those principles–mainly, lift and thrust–work together to achieve flight remains a mystery. Zhang hopes his device, a machine he started designing in the summer of 2005, will reveal at least some secrets of how birds fly. That could lead to advances in airplane technology, as well as new information on how flight evolved in the first place.

Zhang says there are two hypotheses about how flight developed. The earliest bird fossils date back roughly 100-200 million years, although those birds may not have been adept at flying like the birds of today. First, there is the “ground up” hypothesis, which argues that flight evolved as a product of running. “When an animal is running, it develops appendages that allow it to run better and faster and to climb slopes,” explains Zhang. Then, one day, say the “ground up” supporters, the animal builds up enough thrust to lift up into the air.

The other hypothesis states that the development of feathers led to flight. Paleontologists believe early birds developed feathers as a means of keeping warm and that flight was just an added benefit of this evolutionary change. Zhang points out that even with fossils, there’s no way to tell which hypothesis is accurate. “You cannot go back in time to when the first birds lived, so maybe we can build a way–a simple way–that can simulate flight origins,” he says.

In order to keep things simple, Zhang decided to test wing-flapping in water instead of air. Testing flapping in air would require a much larger wing that would have to flap much faster. In water, Zhang and his team can quantify the wings’ movements much more easily. However, postdoc Moret explains, they can still apply their results to birds because they can convert the figures they get from the water experiment to the dynamics of flapping in the air.

The device Zhang ultimately came up with uses a rudimentary motor that applies force to the metal wings until they begin to move. The force causes the wings to move forward as well as up and down. Picture the wings as hands on a clock that flap up and down as they tick forward in a circle. As the motor’s force increases, the wings’ forward movements get faster and faster until they become a loud, whirring blur. The flapping movement is far too subtle to measure with the naked eye, even when the wings aren’t moving that fast, which is why Zhang and his postdocs need a computer program to analyze it.

Eventually, after hours spent trying to get all the components aligned, Moret and Thiria get the experiment to work. As they move, the wings push the bubbles into whirling patterns that look like thumbprints. The digital photographs they collect on the computer look like abstract art—swirls everywhere.

Robert Dudley, a biologist who studies the dynamics of flight at the University of California at Berkeley, calls Zhang’s experiment “nice in its simplicity.” He points out that no one else has been able to show so clearly the transition between a wing at rest and a wing that’s flapping.

Other researchers are interested in taking Zhang’s experiment to the next level. The Zhang team’s early results have piqued the interest of a group at MIT led by Russell Tedrake that works on robots. Now the two groups are collaborating, with the long-term goal of designing robotic birds that flap like Zhang’s metal wings. Ultimately, this type of robotics could lead to new types of human aviation. Tedrake points out that although planes can glide at very high speeds, they are unable to adjust to the air conditions the way birds can. “The idea is to get the maneuverability of a helicopter with the efficiency of a plane,” he says.

Looking at the simplistic metal device in the vat, it’s hard to imagine Zhang’s experiment leading to a robotic bird, much less his dream outcome–a human flapping device. Both Zhang and Moret get excited when talking about the prospect of human-powered flight, the shared interest that united them in the first place. Zhang was in Switzerland, giving a seminar about his flapping research, and Moret stayed after the seminar to ask questions. They wound up talking about human flapping devices for two hours. Soon after, Moret decided to take the postdoc position in Zhang’s lab, and moved to New York last January.

“Flapping is actually more efficient than a propeller,” Moret explains. Someday, he and Zhang may find himself at the forefront of human flight mechanics. Until then, they’re content to study the basics of what birds do without thinking: flap their wings and take to the skies.

Editor’s note: The first sentence of the 4th paragraph originally said:
Zhang first conceived this project two years ago.
While Dr. Zhang has only been working on this specific experiment for 2 years, he and Childress started working on the general concepts 7 years ago.