We Love Lucy – but is She Science or Art?

A microscopic image of our ancestor's thigh bone blurs the definitions of art and science. 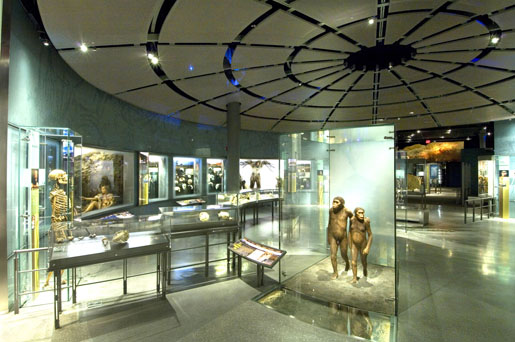 A well-dressed, elderly gentleman with a broad-brimmed hat wanted a picture with Lucy. He patiently posed beside the half-complete replica skeleton, then smiled and murmured a polite thank you as other visitors paused to look. More than thirty years after her discovery and 3.2 million years after she walked the Earth, the ancestral mother of humanity is in the spotlight at the American Museum of Natural History’s new Hall of Human Origins.

Less obvious to the hordes of visitors are the aqua blue-green whorls decorating the wall of the exhibition hall. Far from just decoration, they’re actually magnified, microscopic details of Lucy’s thighbone. The same image is also on display in Spain – as art. Viewers strolling through the Union Fenosa Museum of Contemporary Art in Coruna, Spain, see the Lucy image alongside other aesthetic takes on bone and hard tissue. The microscopic details of mutated fish scales and medieval human teeth resemble abstract paintings with colored dots and strata.

The Lucy image is the work of Tim Bromage, a paleoanthropologist at New York University. He is known among academic circles for discovering a 2.4 million year-old jaw in equatorial Africa, the oldest known example of the human genus that evolved from an ancestor such as Lucy. Now he’s pushing the boundaries of both science and art by using a uniquely designed microscope on an iconic figure from humanity’s past.

Bromage’s image is as informative as it is eye-catching. The high magnification photo reveals details of the collagen fibers that form the structure of Lucy’s leg bone. A sea of green shows fibers running perpendicular to the image; the light blue represents fibers running parallel. The patterns reveal how much mechanical stress the bone experienced – and whether that’s consistent with walking upright. But for museum visitors, the patterns might be indistinguishable from abstract art.

“Some days I say that I’m a scientist, other days I’m an artist,” mused Bromage. He is soft-spoken as he leans back in his chair behind a specimen-cluttered desk, but his words convey deep convictions about everything from the state of science funding to current perceptions of art.

Bromage said he wanted his work to reflect an “artist’s eye” that goes beyond the task-minded achievements of a technician digging for fossils in the field, preparing specimens or imaging them under microscopes.

He spends long hours wielding circular diamond saws and polishing machines to prepare specimens for microscope imaging. Bone samples must be just micrometers thin for microscopy to work. It’s the type of painstaking work that someone must love to do.

“Every specimen you hold in your hand has to be the most important in the world, in order to do world class research,” explained Bromage. “Nothing is routine.”

Bromage uses his microscopes to look at anything that “walks, crawls, swims, flies, or skedaddles.” Researchers send him samples including human teeth from Haiti and sheep jaws from Colorado. A new preparation lab has even more specimens awaiting their turn to be analyzed: a slab of coral from Australia, the skeletons of rats involved in nicotine experiments during the 1970s, the remains of mutant hamsters.

But Lucy’s bones are so rare that scientists dare not slice off thin sections of the fossil. Instead, they use powerful confocal microscopes to illuminate details beneath the surface without damaging the fossil’s bone, like a flashlight shining through a person’s hand.

Confocal microscopes are great tools when the instrument and fossil are easily accessible. But Lucy’s remains reside in a small safe inside a wooden building on the grounds of the Paleoanthropology Laboratories of the National Museum of Ethiopia. Scientists wishing to study the bones must use equipment they can carry with them. That’s a problem when confocal microscopes are large, expensive, and tough to move.

Doing research overseas inspired Bromage to develop a portable confocal microscope that fits inside two suitcases. New York University is currently patenting the instrument, which provides high-resolution 3-D images in real-time without additional software needed to stitch the images together. It was an invention deserving of a high-profile specimen.

“I knew Lucy was the prime candidate,” said Bromage. With a grant from the Leaky Foundation, a nonprofit dedicated to research on human origins, he proved the microscope’s capabilities by capturing details of Lucy’s bones never seen before. They now want him to go back and look at the skeleton’s arms.

As Bromage was imaging Lucy’s femur, Ian Tattersall, a curator for the Hall of Human Origins, needed a picture for the new exhibit. He instantly thought of Bromage’s work that he saw four years before at the Leubsdorf Art Gallery of Hunter College, New York City. The timing was perfect.

“It’s been wonderful for me to see how Tim has been acquiring all these images for scientific research, and has also realized that they are images of extraordinary aesthetic quality as well,” said Tattersall. To him, Lucy is “just as iconic now as it was” at the time of discovery, and it was “unusual and outstanding to find an early human of any completeness.”

Across the Atlantic, the Spanish art museum emphasized the aesthetic quality of the thighbone and other images by dubbing them “Oseos Cosmos: the shapes of time.” Bromage and his colleague, A. Perez-Ochoa from the Complutense University of Madrid, produced the thighbone picture as a collection of circular blue whorls against a largely green backdrop, punctuated with splashes of orange, violet and dark blue. There is no accompanying description for the image, but visitors can pick up a guidebook that tells them what it is.

The idea of blurring science and art is spreading. Princeton University has held an “Art of Science Competition” for the past few years. Researchers in fields including mathematics, physics, psychology, and evolutionary biology submitted images that were largely byproducts of their research.

“Without a label, you might think an image was a color-field painting, but it’s really an agricultural map of Saudi Arabia,” said Andrew Moore, an artist and visiting lecturer at Princeton who came up with the competition. Moore noted that other universities and the National Science Foundation have launched their own competitions.

While scientists have been largely enthusiastic about collaborations between art and science, Moore said that the idea “has less traction in the art world” due to reluctance to expand traditional definitions of art. Bromage encountered similar resistance when he first wanted to show images in New York art galleries.

But back at the American Museum of Natural History, visitors don’t see any of the conflict or cross-fertilization between science and art – they only have eyes for Lucy. As they stand face-to-face with the representation of humanity’s common ancestor, the picture of human evolution is all around them.