A mysterious heron colony sets up camp in a Queens housing project. 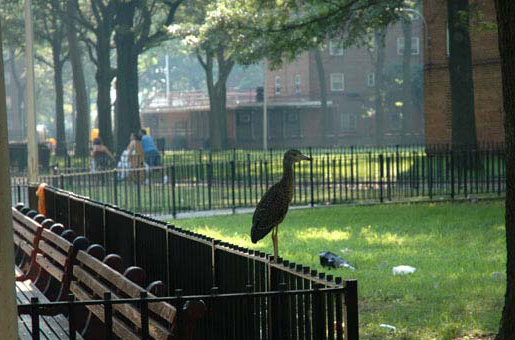 Over an hour away from Manhattan, way out in the coastal area of Far Rockaway, Queens, there is a tree-filled housing project called Redfern Houses. In the news, the Redfern Houses are often associated with violent crime, but within the trees an interesting nature story is unfolding. A few years ago, a heron colony arrived, and neither the ecologists who study the birds nor the project’s residents have any idea what they’re doing there.

A local birdwatcher first spotted the birds — a species called yellow-crowned night herons — four years ago. Last year, the New York City Audubon Society decided to make a pit stop at Redfern Houses during their annual harbor heron survey. They found 29 yellow-crowned herons, according to their survey report, a relatively large amount for an urban colony.

When I contacted the Audubon Society about going out to look at the colony, they recommended against visiting the area alone. I went there in April, and although I only walked around the Redfern courtyard during the day, I didn’t find the area menacing. The greens are well-kept, and one of the nine or so red brick buildings includes a daycare. The yellow-crowned herons seem to favor the trees that shade the daycare for their nests.

While the birds seem comfortable in their new home, not all of Redferns’ residents are excited about their new neighbors. About a month after my visit, Andy Bernick, the ecologist who’s been leading the NYC Audubon Society’s annual harbor heron survey since 2005, returned to Redfern to check on the herons. He also talked to some of the people living there. “I spoke with about 12 residents,” he recalls. “Most were ambivalent about the birds, several liked the birds and were all in favor of them being left alone, two yelled from their window ‘kill those birds’ and one woman said she doesn’t care for birds in general.” 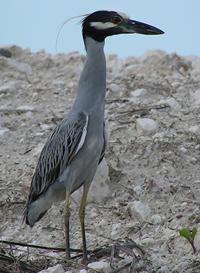 That the colony settled at the Redfern Houses exists at all could imply that the environment there is improving. The islands around New York City were all but devoid of birds like herons before 1972, the year the federal Clean Water Act was passed. When fish-eating bird species, such as herons and egrets, began to settle around Staten Island in the 1970s, many citizens took it as a sign that the water quality in the city’s harbor was rehabilitated.

Still, not all the herons that live around New York City are thriving. In 2001, researchers counted 242 nests of black-crowned night herons, the dominant heron species in the New York Harbor, on North Brother Island in the East River. By last year’s survey, there were only 87 nests on the island. Meanwhile, the original colonies on Staten Island have been abandoned for several years.

Bird experts don’t really know all of the factors that cause one colony to be successful while others fail, but they know that human activity and changes in nesting trees affect the birds’ choices. Contamination of the fish the herons eat may also be causing colonies to dwindle. “Until we know what caused it, it’s hard to know what to do about it,” says Tim Kubiak, who helps supervise environmental contaminant research for the U.S. Fish and Wildlife Services’ New Jersey field office.

The yellow-crowned herons at the Redfern Houses may be doing well for now, but just as it’s unclear why they settled there, it’s also uncertain how long they’ll stay. There’s not much the experts can do except monitor the harbor herons’ activities and lobby for their protection. This year, Bernick counted 20 yellow-crowned night herons at the Redfern Houses, a slight decrease from last year’s 29, but still a stable population. Whether or not the Redfern colony will remain strong may depend on the Audubon Society’s ability to work with the housing project’s employees and residents.

As for why herons are settling in populated areas like Far Rockaway, Bernick proposes the birds might not have an alternative now that human development has taken over much of their natural habitat. “Maybe they’re here because it’s all that’s left,” he says.

great article erica. cool birds. i’d love to go see them. why would someone want to kill them? are they partiularly loud or something? they don’t look like much trouble. Do they mate openly? maybe they’ll add them to the sex in the city tour and everyone’ll see them.

I live here and have always loved the birds, though when they defile the benches with their droppings and you have to watch your head while walking through the pathway, that doesn’t make everyone happy haha.. Though not 100% certain, they have been seen less and less in that area, though they do head out during the winter and return in summer, last summer they did not and I suspect it from another hostile bird in the area, I can’t determine the type of bird but it seems to scare away the herons. Just thought people reading this would like an update c:

And more up to date a of now, they haven’t returned to Redfern yet are still in area close to Far Rockaway, near the swampy marshes of Lawrence is now where they reside.

Actually walking to the store today my son spotted about 10 in Hammel Houses. Guess they left and cane back. They are really pretty but just weird to see.