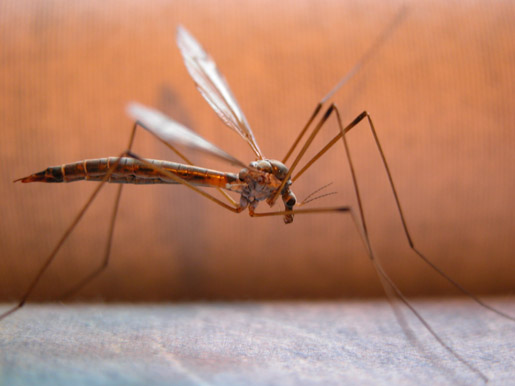 Every summer, they come. They sneak through the windows and ravage your ankles; they find the one spot on your left shoulder that didn’t get drenched in a layer of DEET (God bless you, Deep Woods Off!) and gnaw, chomp, and suck away.

From May to September, many of us – covered in scars and bloody scabs, the remnants of these bites now gone bad – live side-by-side with people who, despite living in the same house and even sleeping in the same bed, are seemingly less vulnerable to the vicious six-legged predators. It turns out, a mosquito’s snacking preference for one person over another is not just a curious annoyance, it’s also a medical concern: Since malaria and other diseases are transmitted by bites, people who get bitten a lot are more likely to become ill. Because of this, researchers are working to find the mechanisms in mosquitoes that cause them to sniff out you, and not your neighbor.

Scientists have identified several proteins found in mosquitoes’ antennae and heads that latch on to chemical markers, or odorants, emitted from our skin. These markers are produced by the natural processes of our bodies and, like neon signs, they let the mosquitoes’ smell center know you’re around (though the process that then guides them to you is not well understood). Flies and mosquitoes share a number of the same genes that dictate production of these odorant-binding proteins, which have specific sites that will catch or bind with certain chemicals in the air. Some scientists suggest that certain characteristics attract mosquitoes, thereby leading us to have more bites than others. Some of the top candidates: the amount of carbon dioxide in the breath, pregnancy, body temperature, alcohol and odorant markers based on blood type.

Blood-type markers are chemicals released by people of a specific blood type – so if someone with AB blood emitted a marker, it would be different than that released by B. One study found persons with Type O blood suffered more mosquito landings because of the odorant markers they emit than any other blood type, making their juices a hot commodity for blood banks, as well as Asian Tiger Mosquitoes, which carry West Nile Virus. Not only were Type O’s more likely to be landed on, but the study found that for any blood type, people who secreted a chemical marker about their blood type through their skin (both blood type and secretor status are determined by genes) were bitten much more than non-secretors; 24 percent in the case of the Type O’s. Other researchers estimate about 15 percent of the population, based on their genes, don’t emit chemical markers of their blood type through their skin and saliva, so something else has to be calling the mosquitoes to them.

Pregnancy seems to be a big winner for mosquito attraction, probably because mothers-to-be exhale 21 percent more carbon dioxide (quite a turn-on to the six-legged species) and are on average 1.26 degrees Fahrenheit warmer around the belly than their non-pregnant counterparts, due to the temperature of amniotic fluid. Also, having just 12 ounces of beer increases your mosquito appeal, possibly because of the increase in body temperature it causes or because skin markers change when metabolizing cocktails – unfortunate since outdoor drinking is a highlight of summer anywhere.

One researcher suggested smell is unimportant, and what really matters to the mosquito currently chomping on your toe is not the smells you’re giving off, rather it’s finishing her meal without being swatted away. Because of this, she’s better off attacking “less defensive” animals, rather than more defensive, and so is evolutionarily predisposed to biting lazy or incapacitated prey (reference drinking above).

Infectious disease experts are anxious to solve the mosquito preference puzzle so they can design repellants tailored to vulnerable people, which would either block an individual’s smell signatures or disarm a mosquito’s scent receptors. Unfortunately, a specific answer to your skin-piercing question continues to itch away at scientists, and I suggest stocking up on bug repellant in the meantime.

I can have 30 people over for a gathering and I will be the only one with bites, not just one or two, I am talking ten or more bites. Not only are they the bites but my body has a reaction to them. Now I have used the sprays (deep woods off the most) and it doesn’t seem to matter. I have tried all the folk remedies and old wives tales that I have heard about but they did no better than the bug sprays. I love the outdoors and am soooooo tired of being a prisoner in my home. Anyone have any suggestions to help me out?

Could you please share the name of the research paper from where you have picked up the facts. The links do not directly open the papers

That is a really good tip especially to those new to the blogosphere.
Short but very precise info… Appreciate your sharing
this one. A must read post!

that’s a photo of a crane fly, not a mosquito

I am regular reader, how are you everybody? This post posted at
this site is in fact nice.

biting gnats , no see ums love me, i,ve been wih others and ,[i am type 0 blood type,[they are left alone.i use avon product that works fairly well ,but any way to change my odor ? no see ums live in my house , so have to wear stuff in morning and evening.

I am O+ with very light skin (burn easily). I was raised in Montana and traveled the Orient in the USAF. Even after three years in Thailand, I never got mosquito bites. My theory is that because my normal body temperature is 96.8 (NOT 98.6) the mosquitoes ignore me because I’m not hot enough.