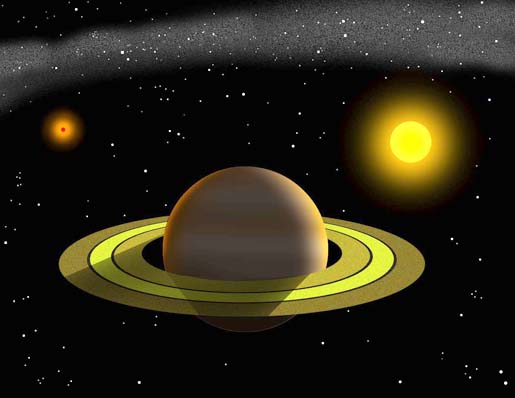 It’s 7 a.m. and the sun’s first rays are nudging you out of bed. Groggily, you stumble into the shower, grab a quick bowl of cereal and head to work. Several hours later, another sun rises and the noontime shadows point in two directions.

That may sound like a scene from a science fiction movie, but astronomers are saying it’s not quite as far-out as it seems.

An Earth-like planet in a two-star system is a possibility, according to Nader Haghighipour and Sean Raymond, post-doctoral fellows at the University of Hawaii and the University of Colorado, respectively. They defined which parameters such a system would require to support a habitable planet in the September 1 Astrophysical Journal. Although the existence of an Earth-like planet in a binary star system has never been deemed impossible, there are plenty of complications: The distance of the planet from the sun it orbits, the length of that orbit and the distance from the other sun all determine whether or not life is possible.

Haghighipour and Raymond have designed a model in which a planet can orbit one of the stars in a binary system, at the correct distance to support life. Now, Haghighipour said, binary star systems that fit the model should be identified and searched for planets. “We don’t have to randomly look at whatever comes into our telescopes,” he added.

Astronomers have already found three large gaseous planets in binary star systems like the ones described by Haghighipour, out of the more than 240 known planets outside our solar system. All of the planets that have been discovered so far are Jupiter-sized or larger. More than half of these 240 have been discovered by astronomer Geoffrey Marcy at the University of California at Berkeley. In an interview, Marcy said that while Haghighipour and Raymond’s study will be useful in identifying binary stars that could have planets, he would be cautious about relying on theory alone.

“History shows that we are often surprised by nature,” said Marcy.

Planets are found by studying stars. Planets orbiting a star exert a gravitational force, causing a “wobble” in the star’s location that can be detected by telescopes. Binary star systems, however, present a unique challenge in looking for planets because the gravitational pull the stars exert on each other makes it difficult to distinguish whether an observed wobble is due to an orbiting planet or simply the partner star.

Determining the number of planets in multiple star systems is just one of the goals of the Kepler Mission, a NASA planet-finding mission scheduled to launch in February 2009. Kepler scientist Dave Latham is skeptical about Haghighipour’s model because it is pure theory and so specific. He is not comfortable using their model because there is not yet observational data to back it up, he said in an e-mail.

Other scientists are more optimistic, if still cautious. Angelle Tanner, a scientist with NASA’s Space Interferometry Mission, a project designed to search for planets using light waves to make precise measurements of the positions and distances of stars, said Haghighipour’s work could be important because binary stars are about twice as common as single stars. As a result, knowing that there is a model for which an Earth-like planet could exist in a binary star system improves the chances of finding one, Tanner said.