How do they make the first down line appear on the football field during a game? 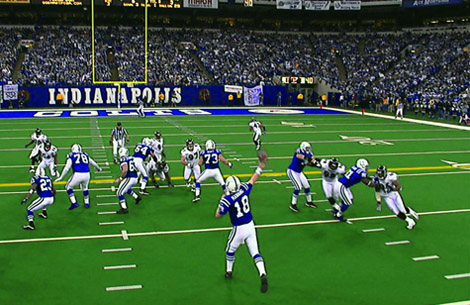 That yellow stripe is not actually on the field, but the 1st and Ten Line has become a staple of football games on television. [Credit: Sportvision]

NFL Roots for the Environment

Most people take it for granted on any given Sunday. It comes and goes, but its mission is singular. It is the yellow line on television with the sole purpose of showing millions of National Football League fans the division between the redemption of a first down and the frustration of a lost opportunity.

This linear marking, officially known as the 1st and Ten Line, debuted in 1998 and won several Emmy Awards for technical achievement. Despite appearing to be completely novel, this technology is actually the complicated cousin of a more familiar computer graphic also seen by legions of viewers: the television weather map.

For the weather map, an anchor stands in front of a blank green or blue screen. In the studio, the background remains an empty canvas while a computer pastes the picture of the weather map over the colored background for viewers to see. This process, known as color keying, is essentially the same process used to create the line on the field.

Unlike the controlled conditions in a television studio, the variability of football fields makes color keying much more difficult to implement.

Every field has a crown for drainage, explains Ted Chen, vice president of operations for Sportvision, the company that makes the 1st and Ten Line. To account for the slight unevenness of the field, Sportvision technicians begin by taking 20 to 40 measurements of the field’s topography using a laser placed on the 50-yard line. After the survey is done, Sportvision creates a three-dimensional map of the field.

“Without that, you pretty much don’t have a product,” Chen says. It is this 3-D map that allows for the virtual yellow line to appear as though it is actually painted on the field.

In the production booth, the 3-D map is overlaid onto the camera’s field of view. Every camera used on game day is installed with special sensors inside of the lens and on the camera mount. As the camera angle moves up and down or zooms in and out, the sensors send the information to a computer to make sure the line is adjusted accordingly on the map.

The line itself is inserted over the green field, the same way the weather map is placed in over a green screen. However, while the lighting and shade of green are completely controlled in a television studio, different types of turf and grass and ever-changing weather conditions always have to be considered.

To account for that problem, all of the known shades of green that make up the field are entered into the computer before game day so that the line only covers the field, and nothing else. This allows for the illusion of players running over the yellow stripe. Team uniform colors, such as the Green Bay Packers, can also be tough, as the computer has to be told not to paste the yellow line over the shades of green in players’ clothing.

Similarly, the computers are designed to compensate for weather. Despite rain or snow, the line will be there. The most problematic condition, however, is not clouds or even snow, but mud. The line must cover the mud on the field, but not the mud on any players standing on top, or running across, the virtual line. As long as the mud is not completely smeared across a player’s jersey, the computer can usually distinguish the mud on the ground from a little mud on a player. But if players and the turf are equally smeared in mud, the production team may decide not to show the line for a particular play.

Nearly a decade after the yellow line first appeared, there are now various enhancements to the system. Depending on the station airing the game, Sportvision also creates a red line of scrimmage, arrows showing the down and distance, and kicker graphics.

Chen says the 2008 Super Bowl will also include the company’s latest technology known as freeze-cam – a high definition digital photography lens mounted on the broadcast camera that allows for zooming in and out of freeze-frame shots of the action.

The NFL is not the only professional sports league to adopt the latest technology. Soccer games can be seen with kick-tracking technology, and a computer-generated strike zone lets every Major League Baseball fan call the pitch from the comfort of the couch. While fans debate the merits of these and other computer enhancements for sports, the little yellow line remains a technological achievement appreciated by fair-weather and rabid fans alike.

Wonderfully explained and timely–I’ve been hunting feverishly to get this answer for my nephews. Now I want to know how and if Eye Black under athletes eyes works–I’ll keep at it.

THANK YOU!!! How this was done has been bugging me for two years, since I started dating again. Even the guys who are “real” football fans couldn’t tell me how the graphics were projected on the screen. Of course, they really only care about which team has the ball. But, they have simple minds that are easily entertained…witness the popularity of wrestling! (Can you explain that??)

i work with layers in film and i could not figure out how they chroma keyed the whole field, that 3d information just blew my mind!

does the player know where the yellow line is?

George –
no, but there are the big orange bulls-eye things being held by people on the sides that show the players where the first down is. Technically, they are called “markers”. Look at the yellow line and follow it to the sides, you can usually catch a peek of the marker and holder-guy!
The point is to reach for the 1st down line, so I would assume that is why they seem to be reaching for it. Because they are.
:)
Happy Playoffs!
Go Arizona, Go New York!

it’s eye black, it reduces the glare/reflection from the sunlight or bright stadium lights so the player can focus on the ball or players.

foot ball isn’t the only sport that uses it, several othe sports use it, but it’s also widely used in Major League Baseball

some players have now gone as far as putting short phrases on them as well which is really somethin that I don’t see the need for, because it seems like it’s defeating the purpose.

Yo what was he thinking, that’s nuts

Thanks! I’ve wondered about this for a long time. The guys I’ve asked just take it for granted, but I wanted to know how they did that. Now I know my answer.

I’ve been curious of this for a while also. Thanks for your post and excellent explanation. It’s definitely more complicated than I thought though!

If anyone wishes to find out WHERE this technical capability was developed, you must ask one of your friends who works in a TOP SECRET work environment, doing MILITARY Project Design. These techniques, although explainable now, were extremely useful in all kinds of Military Applications, used during wartime. Just as there were so manyh technilogical advancements dikscovered and developed during our Space Shuttle Probram,so too have there been a HOST of such special develoopments discovered during our several Military Involvements, such as in Iraq and Afghanistan, not to mention Iran, Pakistan, China and Russia. The problem is your friend who might work right in the midst of these continuing-to-be-discovered methods, can NOT tell you about them unless you have a Need-to-know, and are CLEARED by Security to be TOLD about these techniques, and to have them explained to you. Suffice it to say that, eventually, most, if not all of these special effects will EVENTUALLY filter down,(after they have been de-classified, which could take years)to the “White” or Unclassified environment and be available to we “ordinary” citizens. Thank God for our many Classified Programs going on at all times within our Military-oriented Engineering Companies. Bill Getson BSEE, MSEE, PE and forty (40) years of Engineering involvement and participation in these types of Programs.

If you watch major swimming and track-and-field events they will usually use this same technology to put the country flag of the swimmer or runner in their lane before the start.

You’ve made some good points there. I looked on the internet for more information about the issue and found most individuals
will go along with your views on this site.