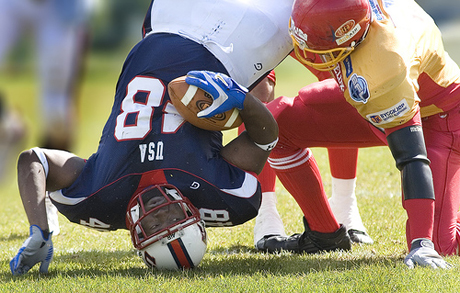 Athletes who play on despite suffering a concussion put themselves at increased risk for a second one. [Credit: Atle Brunvoll]

Despite the old saying encouraging you to hop back on your bike after falling off, it turns out that may be bad advice, particularly if you hit your head on the fall.

After having one concussion you are more likely to have another — some doctors estimate you increase your risk up to three times. There are two reasons why your risk increases: carelessness and brain chemistry.

The first reason is the obvious: After you hit your head, you will be slower to react. So if you jump right back on your bike, you won’t have the same reflexes to stop on a dime or swerve at the last minute. Surprisingly, this is actually more common than you might think. Devoted football or soccer athletes may return to a game sooner than they should after taking a hard hit, greatly increasing their risk of another concussion. Also, after you have a concussion, you’re less attentive overall, making tasks like crossing the street that much more dangerous.

The increased susceptibility for a second concussion also comes down to brain chemistry. A concussion causes chemical changes in your brain, which leave the brain unbalanced and more prone to damage for up to a year, said David Hovda, director of the Brain Injury Research Center at the University of California, Los Angeles.

What happens during a concussion, said Dr. Jamshid Ghajar, the president of the Brain Trauma Foundation, is that the pulling and stretching of your brain results in tiny tears in the white matter — the tissue connecting the different brain regions. The result is less attentiveness and memory and slower reflexes.

Your brain is contained in fluid in your skull, much like an ice cube in a glass of water. Moving the glass back and forth causes the ice cube to slosh around in the glass. This is what is happening to your brain during a concussion. It’s not the movement itself that causes the concussion, but the force and acceleration of that movement, Hovda said.

“It causes all the cells in the brain to fire — like the brain is having a mini-seizure,” he added.

When the cells fire during a concussion, they release neurotransmitters. One neurotransmitter, glutamate, causes the cells to release potassium and take up sodium, the crucial chemical processes through which nerves send electrical signals.

When potassium leaves the cell, the cell wants to pump it back in again. This requires enormous amounts of energy, so immediately after a concussion the brain is metabolically very active, trying to pump the sodium back in. As a result it burns lots of glucose. In addition, the uptake of sodium prevents the cell from being able to access its energy reserves. This results in what Hovda calls an “energy crisis.”

The brain is susceptible in this energy-deprived state because it does not have the energy to restore the sodium/potassium balance if it sustains another blow.

Normally, blood flow to the brain would restore the glucose. But a concussion also causes the muscles around the blood vessels to constrict, reducing the amount of blood able to reach the brain. As a result, the brain remains in an energy crisis and susceptible to damage.

In sum, suffering a concussion increases your chances for having another one because of the chemical changes that can leave your brain debilitated for up to a year. So the next time you fall off your bike, think twice before hopping back on right away.

It in the jaw joint, once cartilage is dislodged in the TMJ, your more prone to “events”. The theory has been proven by the N.E. Patriots head and neck specialist. Two concussions in the past two years, the Colts have had over twenty in the same time span. Go to http://www.mahercor.com for more stories confirming this discovery to one of the solutions to protecting players.

ouch, that looks really painful. I’ve been knocked mid air and did a 360 back flip

this is untrue. a concussion is more likely to occur a second time because the fibers supporting the brain become stretch following any kind of head injury, concussive or subconcussive, making the brain more vulnerable to even further injury, including what people call second impact syndrome, regardless of whether the individual sustained a concussion or whether they still have one.

when i was sixteen i had a concussion, seven months later i had another concussion, 2 or three months after that i had 4 more, then i started to get some serious pain, that seamed to come from my brain stem area from anysort of movement, which gradually grew more acute as time went on, then, after i’d suffered a pretty nasty concussion from banging my head into a wall invuluntarily in my sleep and what i may as well call more brain-stretching subconcussive injurys from running in heal-less shoes, i got a concussion very easily from a friendly shove to the head, then i couldn’t help but recieve concussive episodes from everytime i coughed or sneazed. in short order i couldn’t lie down, walk or sleep without my brain touching my skull, which caused stroke like episodes in the respective area which touched the effects of which lasted for verying degrees of time from days to month – the long one’s were the worse, onetime causing retrograde and anterograde amnesia, walking alone made things worse, now i’m finding myself the worse i’ve everbeen, i’m pretty sure i’ve gotten to the point i won’t be able to pull out of it, not sure what to do. :/

how are you holding up

James,I feel the exact same after more than a dozen concussions during childhood,my brain feels highly sensitive to any g force,like say breaking in a care I feel my brain being pushed into the front of my skull or say lifting off on an airliner I feel my brain brining pushed downwards.its a daily hell to live with.

Will it ever go back to normal? I had a concussion back in may and whenever i get hid somewhat hard in the face during practice my head hurts a little bit I don’t know if its a concussion or its just my idea. If it was a concussion will by brain me ever able to work normaly?

I hope you are managing to get better!

As a recommendation, I have found that a good bio-cranial osteopath has really helped me recover from concussions and also sub-concussive impacts (sports related). I would strongly recommend trying to find a good one to help you. It may take a good few appointments at this point, but I have yet to find anything else that can help.

I had no idea I had a concussion bc I didn’t pass out. Then I had several more before I figured out what was happening. I’ve had 7 years of post concussion disorder. It sounds crazy or like ptsd but even a slight tap on my head creates new concussion symptoms . I cannot get a doctor to tell me why or if is a new concussion but it’s impossible to never have anything ever touch your head again. What is happening and is it hopeless to heal at this point ? I was totally fine and a cat literally tapped his paw on my head and I had to lay in bed for a week. Thank you .