Antibacterials: Good For You Now, Good For Germs Later? 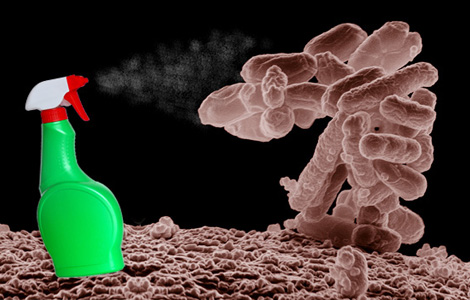 Americans are now spending a billion dollars a year on products ranging from children’s toys to chopsticks that are treated with germ-fighting compounds. As the popularity of antibacterials surges, though, some scientists are warning that certain additives may actually contribute to the rise of antibiotic-resistant “superbugs” and therefore leave us more vulnerable to disease.

Among the latest evidence is a recent scientific assessment concluding that as bacteria evolve to better withstand a widely used antibacterial agent called triclosan, the microbes can also develop resistance to antibiotic drugs used to fight serious infections.

“Given these potential risks, we really need to be thinking about this,” says Allison Aiello, a professor of epidemiology at the University of Michigan and the lead author of the comprehensive review about triclosan published in the journal Clinical Infectious Diseases in September.

So far, this connection between antibacterial application and antibiotic resistance has only been demonstrated in laboratory experiments and not in the outside world. But while some experts downplay the danger, others caution that emerging hazards associated with antimicrobials may outweigh any short-term, germ-fighting benefits.

By any measure, the market for antibacterial products is booming. Last year, 1,610 new products were introduced globally, compared to just 200 introductions in 2003, according to the market research firm Mintel. The United States has led the way, which is not surprising given a Mintel poll which showed that 71 percent of American adults “prefer antibacterial and germ-killing cleaning products.” Triclosan itself originated as a pre-surgical scrubbing agent in 1972, though it now appears in a myriad of consumer products, including about 70 percent of soaps.

As the public’s infatuation with antimicrobial products has grown over the years, so have reports of antibiotic-resistant bacterial infections.

“It is a huge problem,” says Donald M. Poretz, a professor of internal medicine at Georgetown University in Washington, D.C., as well as the president of the Infectious Diseases Society of America, based in Arlington, Va. “We are finding microbes that are resistant to every antibiotic we have access to.”

Poretz and other public health officials blame antibiotic overprescription and misuse as primary reasons for the rise in superbugs. For instance, the U.S. Centers for Disease Control and Prevention estimate that one-third of the 150 million antibiotic prescriptions written annually by doctors are unnecessary. Other recognized contributors to this bacterial insurgency include heavy dosages of antibiotics fed to livestock to keep them healthy.

But some researchers say these two sources may not fully account for why some bacteria are exhibiting an alarming insusceptibility to antibiotic treatment.

Aiello’s paper highlights seven previous studies demonstrating that several bacterial species can evolve antibiotic cross-resistance after being exposed to triclosan in laboratory experiments. This means that as bacteria adapt to stave off triclosan, they can also gain the ability to survive exposure to antibiotics.

Other studies cited by Aiello have shown that the concentrations of triclosan in many antibacterial soap brands are not high enough to be all that effective against microbes in the first place. Instead, bacteria are being subjected to persistent low levels of a chemical that shares certain germ-fighting properties with some antibiotics, which may help breed tougher microbes in the environment.

Stuart Levy of Tufts University, the paper’s third author and former president of the American Society of Microbiology, has devoted extensive research to this issue. Over the years, he has been a salient voice warning of the perils posed by antibacterial compounds.

His own investigations have shown reason for concern. “Our research shows that you can isolate [bacterial] mutants resistant to both triclosan and antibiotics,” Levy writes in an email, referring to several studies he has previously published about his work with E. coli in controlled experiments.

Triclosan is known to adversely affect bacteria by inhibiting the enzyme used to generate fatty acids for new cell membranes, essentially preventing future bacterial growth. This same metabolic pathway is also targeted by some antibiotics, such as isoniazid, an important drug in treating tuberculosis. So if a bacterium evolves a defense mechanism against triclosan, Levy has argued, it may develop resistance to certain antibiotics as well.

While Levy readily admits that “there is no evidence for the fact that [antimicrobials] are promoting microbial antibiotic resistance in the community,” he adds that “there is grave concern they will, since it occurs in the laboratory.”

A key uncertainty is the amount of time bacteria need in order to evolve resistance to germ-killing agents and then perhaps to antibiotic medicines as well. For example, deadly antibiotic-resistant strains of staph bacteria, usually referred to as methicillin resistant staphylococcus aureus (MRSA), took decades to emerge in clinical and now public settings.

This is a dilemma since many antimicrobial products have already been on the shelves for years, making it hard to know if bacteria have partially evolved their defenses in response to these biocides or for other reasons entirely.

“These products been around so long, it is difficult to assess what effects have already occurred,” Aiello says.

But an industry spokesman dismisses worries over antimicrobials, calling the whole debate “a ghost story without the ghost.” Brian Sansoni is the vice president of communication for the Washington, D.C.-based Soap and Detergent Association, which represents cleaning product manufacturers. Sansoni says that the evidence is “crystal clear and overwhelming” that the rise of antibiotic-resistant pathogens is due to the overprescription of drugs and not the increased use of antimicrobial products.

“For us, it is frustrating as critics have created this suburban myth that the use of these products is contributing to antibiotic resistance when the evidence counters that,” says Sansoni.

Some independent researchers agree. Philip Tierno, the director of clinical microbiology and diagnostic immunology at the New York University Medical Center, contends that germ-fighting consumer products are making no contribution at all to the problem of antibiotic immunity.

“Levy is the Pied Piper for this movement,” Tierno says, adding that in more than 30 years of triclosan use, not one documented case of antibiotic resistance has come up due to the triclosan found in hand soaps. The benefits of antimicrobial products “are on the side of those who use them judiciously in their homes,” Tierno states.

He also notes that Levy is the co-founder of Paratek Pharmaceuticals, a corporation that produces anti-infective agents, and is therefore in a position to financially benefit from the real or perceived threat of superbugs.

But Levy responds that “Paratek emerged because of the need for new antibiotics, and we have been successful.” According to him, the company has novel varieties of the antibiotic tetracycline in clinical trials that will replace some currently available antibiotics that microbes have evolved to withstand.

In an indication that the debate about antibacterials is far from over, Levy has forthcoming research that he expects will find “a lot of antibiotic resistance in the normal bacteria in households,” possibly as a result of “people slowly changing the microbiology of the home” through the unchecked use of antimicrobial products.

In the meantime, one aspect that all scientists agree upon is that a principle route for bacterial transmission is via the hands – usually those that haven’t been washed. Whether or not antibacterial soap is used, the mechanical action of rubbing one’s hands together with soap and water greatly reduces the overall number of microbes, regardless of the efficacy of the antibacterial chemical in the suds.

Aiello suggests washing for “at least 20 to 30 seconds,” and Tierno offers that singing “Happy Birthday” twice in a row will help one to keep the time.

“You want to get in between the fingers, the top and bottom of your hands and underneath the nail bed as well,” says Tierno. “Now that’s a good hand wash.”

Does the “five-second rule” for dropped food really work?

See how NASA’s “clean rooms” might not be so clean after all.

Learn how microbes can survive millions of years in Arctic ice.