A new study offers a possible solution to the riddle of the antimatter cloud in the galaxy’s core. 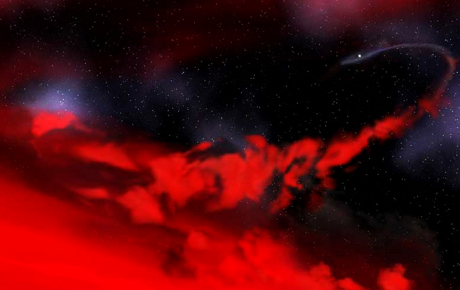 These binary stars may be responsible for the antimatter cloud in our galaxy. [Credit: NASA]

Zombie-like behavior in certain star systems may generate the mysterious antimatter cloud at the center of our Milky Way galaxy, according to a new study. This phenomenon of “dead” stars devouring their stellar neighbors shows how significant quantities of antimatter could be produced in the cosmos.

Recent satellite measurements amazed scientists by revealing that the antimatter cloud is irregular in shape. As it turns out, the cloud’s lopsidedness closely corresponds to the distribution of a particular kind of binary star system. These matching patterns imply a strong link between the two, though other theories remain for the cloud’s origins.

“We have seen something that has given us a clue in explaining a long-term mystery,” says Gerry Skinner, a senior research scientist at the University of Maryland and an author of the study published in the journal Nature in January.

Astronomers cumbersomely classify the suspected antimatter-source stars as “hard” low-mass X-ray binary systems (LMXBs). In these double-star arrangements, one of the stars is either a neutron star or a black hole, which are the diminutive remnants of an immense sun. This dense, revenant star wields powerful gravitational forces that leech gases from a normal, lower-mass companion star.

This feasting spews out gobs of energy as the super-heated gas, or plasma, from the unfortunate donor star is accelerated in a whirlpool around the ghoulish mini-star. The reactions discharge substantial amounts of antimatter, as well as the X-rays that help give these star systems their name.

“Finding a source for where all this antimatter comes from has been hard to tie down,” says Skinner. On top of that, “this antimatter is somehow getting out of these systems and into the galaxy” and interacting with “normal” matter, he adds.

Antimatter is volatile stuff. When it comes into contact with ordinary matter particles, they annihilate each other in a burst of energy. Telltale signatures from these interactions — in the form of gamma rays — emanate from the region surrounding the galaxy’s core and have confounded scientists for more than 30 years. Researchers first identified the cloud in the 1970s when detectors picked up gamma rays that bore the distinct energy imprint of 511,000 electron volts. This is the amount of energy produced when a regular-matter electron and an antimatter-electron, called a positron, collide and obliterate each other.

So when these emissions from the oddly-shaped cloud lined up with the locations of dozens of LMXB star systems, astronomers knew they were on to something.

The next step is to definitively pin the antimatter production on the violence in LMXBs, says Georg Weidenspointner of the Max Planck Institute for Extraterrestrial Physics based in Garching, Germany, and the lead author of the Nature paper. His team will devote significant, additional observational time with the European Space Agency’s INTEGRAL (International Gamma Ray Astrophysics Laboratory) satellite later this year to follow up on their initial findings made possible by the orbiting laboratory.

Beyond this apparent stellar cannibalism, another exotic source may also fuel the enormous antimatter cloud. Celine Boehm, a researcher at France’s National Center for Scientific Research, has proposed that the decay of “dark matter” in the Milky Way’s hub could also explain the genesis of the cloud.

Dark matter is a theoretical substance that cannot be observed directly in the cosmos. Astrophysicists infer its existence because of otherwise unexplainable gravitational effects. Though there is no proof that dark matter is real, it may actually be the most abundant material in the universe.

“We have strong evidence that there is a halo of dark matter particles surrounding the galactic disk,” says Boehm. Depending upon the mass of these enigmatic particles, they may break down into electron and positron pairs, accounting for the 511,000 electron-volt energy readings registered by the INTEGRAL satellite.

Boehm thinks binary star systems contribute to the antimatter cloud but are not likely the sole progenitors of it. Weidenspointner’s work “is not in conflict with the dark matter hypothesis,” she says. “In fact, one expects to see both.”

Weidenspointner agrees that Boehm’s ideas are still viable as well. “We cannot rule out that dark matter makes a small contribution to the positrons that we see,” he says.

A researcher not associated with the Nature study or Boehm’s work suggests that the new data is promising and matches well with existing theories about how antimatter is born.

“I wasn’t entirely surprised to hear about antimatter production around binary stars,” says James Bickford of the Draper Laboratory in Cambridge, Mass. “In our universe there are quite a few very energetic processes that pack sufficient punch for this to happen.”

Intriguingly, our own sun releases the gamma rays that are characteristic of matter/antimatter particle annihilations. Bickford says our sun churns out kilogram quantities of positrons during intense sun storms known as solar flares. This is a very small amount though, considering that the flares eject billions of metric tons of stellar material into space.

So while it does not take an event as dramatic as a star gobbling up another star to unleash destructive doppelgangers, antimatter is still an extremely rare material in the universe. In the end, that is probably a good thing.