With the help of robots, Joy Crisp is solving the mysteries of Mars. 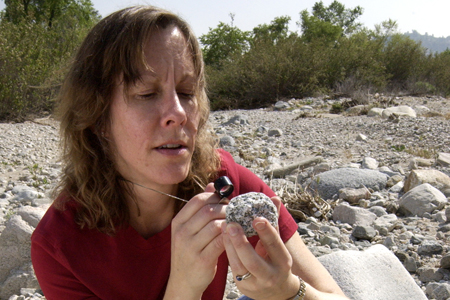 Joy Crisp, working on the next generation Mars Rover, takes a closeup look at a rock with a geology hand lens. [Photo courtesy of NASA/JPL-Caltech]

Joy Crisp is an interplanetary detective. By sending robot geologists to do the dirty work, she spent the past fifteen years deciphering clues left in the rocks covering the Martian surface.

Using data from the spacecraft and rovers NASA has sent to the Red Planet over the past 40 years, Crisp and her colleagues are searching for the telltale signs hidden in the rocks that can offer stories about the fate of its volcanoes, atmosphere and water.

“You pull all the clues together and use everyone’s expertise to figure out what you’re looking at,” Crisp says of their collective effort. “You’re reading them backwards from the mineralogy, composition and texture.”

Now, Crisp is planning the next generation Mars rover: the Mars Science Laboratory, or MSL. Coordinating with teams from universities, NASA and industry developers, she hopes the rover can hitch its ride to Mars in the next year and a half. With the successful arrival of the Phoenix Lander this May, the MSL will be the next spacecraft to head to the planet.

Crisp started her journey in a basic geology course during her sophomore year at Carleton College in Northfield, Minnesota. Deciding then that her future was with rocks, she continued to study volcanoes, eventually earning a Ph.D. in geology from Princeton University in 1984.

Five years later, Crisp joined the Jet Propulsion Laboratory, or JPL, in Pasadena, California to study aerial images of Earth’s volcanoes. Following this project, JPL needed someone with her expertise to examine Viking images of Martian lava flows. This is when her detective work began, and she has kept her eyes on Mars ever since.

While at JPL, Crisp worked on all of the Mars rover missions from 1994 to now: Pathfinder, Spirit and Opportunity. The 1996 Pathfinder mission was the first to show that the rover concept was a viable model for remotely exploring Mars. It remained operational over 10 times longer than the designers had envisioned.

As the first robot geologists, Spirit and Opportunity have also greatly surpassed their anticipated lifetimes. They continue photographing and analyzing the Martian surface, over four years after their arrival in January of 2004. Opportunity is currently examining the Victoria Crater, while Spirit is hunkering down for the Martian winter to conserve energy.

Now, as Deputy Project Scientist for the MSL, Crisp continues the search for indicators of water and organic molecules trapped in the rocks of the Red Planet. Her teams are incorporating the lessons from Spirit and Opportunity, such as discarding solar panels that acted like magnets for the very fine Martian dust, making it hard to recharge its batteries. The MSL will be the most advanced rover to journey to Mars, and NASA anticipates the project’s cost to be about $1.8 billion. The project will launch in the fall of 2009 and land on Mars the following summer.

Crisp is coordinating about 200 scientists and engineers who collectively develop new science instrumentation technologies for this project. She works not only with colleagues at JPL but also with researchers at CalTech and other universities, Malin Space Science Systems, NASA’s Goddard Space Flight Center and the Canadian, Russian and French space agencies.

Last September, this group completed the initial design phase. Now, they are writing software and building and testing the scientific gadgets that will do the detective legwork for them on Mars.

As the largest rover sent to Mars, the MSL will possess the same equipment found in a geology lab on Earth. It will house a meteorology station, radiation detector, two high-resolution cameras and several other components to analyze the Martian surface. It will even have a laser to zap rocks up to nine meters away to determine what they are made of by analyzing the emitted atoms with a mass spectrometer.

Once the MSL provides in-depth information about the composition of the Martian rocks and soil, it will reveal more about the abundance of minerals and, possibly, the existence of organic molecules. Crisp says that these tools will help “understand the habitability of the environment of Mars . . . and see past events that are locked in the rocks.”

While the exact landing site has yet to be determined, most of the candidate locations are close to the Martian equator. Scientists have narrowed the list to places where they hope to find layered sedimentary rocks, which could hold secrets of the region’s water history as well as clay deposits that may be remnants of past weather cycles.

The MSL will have enough power to spend two Earth years studying Mars. The rover will collect and analyze more than 50 samples of soil and rocks. They are looking for a wide range of organic molecules, such as amino acids and nucleobases—or parts of DNA and RNA—all of which are understood to be the building blocks of life. Scientists want to determine if these compounds are or ever were there and what happens to those preserved in meteorites.

Crisp and her fellow researchers hope that the results will provide more clues to help solve the ongoing mysteries of what happened to Mars’ water and if there is still some hiding below the surface.

Joy Crisp is excited about the Mars Science Lab’s technological capabilities. “When we finally put a sample in that lab, that will be the ultimate thing,” she says. “We will step up to the next level of understanding Mars’ history.”

Space contamination: NASA’s “clean rooms” are home to a variety of extreme bacteria.

A new theory proposes a universe before the Big Bang.

Earth-like planets may reside in galaxies centered around two stars.