Is it true that hot water makes ice cubes faster than cold water? 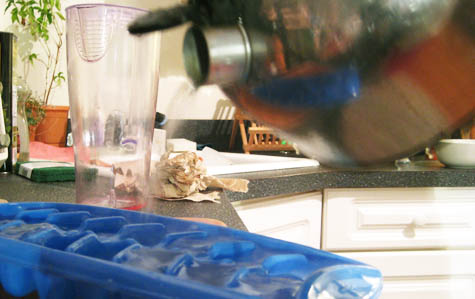 Determining whether or not hot water can freeze faster than cold water may seem like a no-brainer. After all, water freezes at zero degrees Celsius. And wouldn’t water hot enough to kill E. coli bacteria (about 120 degrees Fahrenheit or 50 degrees Celsius) take a longer path than cooler water at a fall New England beach (about 60 degrees Fahrenheit or 15 degrees Celsius) towards a frigid future as ice? While a logical assumption, it turns out that hot water can freeze before cooler water under certain conditions.

This apparent quirk of nature is the “Mpemba effect,” named after the Tanzanian high school student, Erasto Mpemba, who first observed it in 1963. The Mpemba effect occurs when two bodies of water with different temperatures are exposed to the same subzero surroundings and the hotter water freezes first. Mpemba’s observations confirmed the hunches of some of history’s most revered thinkers, like Aristotle, Rene Descartes and Francis Bacon, who also thought that hot water froze faster than cold water

Evaporation is the strongest candidate to explain the Mpemba effect. As hot water placed in an open container begins to cool, the overall mass decreases as some of the water evaporates. With less water to freeze, the process can take less time. But this doesn’t always work, especially when using closed containers that prevent evaporated water from escaping.

And evaporation may not be the only reason the water can freeze more quickly. There may be less dissolved gas in the warmer water, which can reduce its ability to conduct heat, allowing it to cool faster. However, Polish physicists in the 1980s were unable to conclusively demonstrate this relationship.

A non-uniform temperature distribution in the water may also explain the Mpemba effect. Hot water rises to the top of a container before it escapes, displacing the cold water beneath it and creating a “hot top.” This movement of hot water up and cold water down is called a convection current. These currents are a popular form of heat transfer in liquids and gases, occurring in the ocean and radiators that warm a chilly room. With the cooler water at the bottom, this uneven temperature distribution creates convection currents that accelerate the cooling process. Even with more ground to cover to freeze, the temperature of the hotter water can drop at a faster rate than the cooler water.

So the next time you refill your ice cube tray, try using warmer water. You might have ice cubes to cool your drink even sooner.

Deciphering bacteria’s defenses, one gene at a time.

The negative consequences of your tongue-in-cheek closing sentence gave me pause. Can you imagine the enormous amount of fresh water wasted (the cost of which is already skyrocketing in the US) should any sizeable portion of the populace begin running their taps until hot water pours out just to obtain “warmer (than tap water temp) water” for slightly faster ice cube formation? Add to that the wasted energy caused by heating the water only to cool it down again. Comparing/quantifying the inputs and savings – fresh water costs + energy cost of heating a volume of water – energy saved by not running the freezer compressor quite as long to cool it down again gives me a slurpee-like “brain freeze”!

Oh, it would be terrible! with americans making ice cubes constantly as we all do, it would virtually eliminate all water from the planet in a matter of days! I brushed my teeth this morning, I left the faucet on too. I got news for you, there is no more or less water on the planet now as there was this morning or there will be tomorrow.

Just want to say- I live in an area that has very cold winter temperatures, and the hot water pipes ALWAYS freeze before the cold water pipes.

Ed is correct, the hot water will cause global warming and then we won’t have any ice. I’m totally serial.

A coworker who tried the warm-water method for making ice noted that the ice had absorbed smells/taste from other food in the freezer.

Learned this awhile ago while working as a chef’s assistant. Hot water freezes faster and COLDER water boils faster.

Making water warmer would not make it feeze faster, it has to be boiling. I once left bowls of hot, warm and cold water out in freezing temperatures and found that the hot water froze first, the cold water second and the warm water last.

Hi – I always thought that the hot water ice blocks froze first because of the extent of the difference in temperature between the water and the surrounding cold air, with the freezing being caused by the rapid osmosis – in the same way that evaporation causes cooling.

However, I was wondering, does this just effect the outside edges of the ice-block? If so, how does this effect the time it takes for the whole ice-block to freeze – right through to the core of the block?

Great goods from you, man. I have understand your stuff previous to and you are just extremely wonderful.

This is the most idiotic post and comment thread (aside from the tongue in cheek ones) that I have ever read.

I would like to know about logical difference between ice cold water and simple cold water?

Has anyone thought I how gross the inside of a hot water tank is… I wouldn’t drink or eat anything that comes from a hot water tank. I have seen it it’s not safe to drink… Why make ice cubes from it?!

My never images are never as good :(

I guess the majority of people did not take physics or even simple science in high school. This has been taught for decades. Ha.

wow I never knew this, got landed to this page while searching for something similar on goolge :) will try and compare and come back to post if this is right !!

Back when I worked as a bartender the notion was that making ice using hot water resulted in clearer ice cubes than using cold water.

I have observed this to be true, the cloudiness in conventional ice cubes appears to be trapped and compressed dissolved gasses in the water. Heating the water expels the gasses, so the ice freezes clear.

The rate at which ice cubes melt is faster with hot water. However, whether they freeze faster overall I am going to see for myself. Time for some good old fashioned expiriementation.