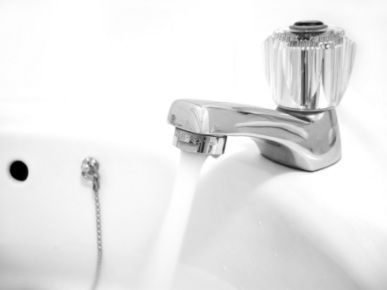 Unless you suffer from potamophobia, the fear of running water, what’s gushing from your faucet shouldn’t scare you. According to the Environmental Protection Agency, Americans enjoy one of the safest public drinking water supplies in the world. Even so, harmful bacteria and parasites, lead from old pipes, and trihalomethanes from chlorination processes occasionally do travel through the tap, so it’s wise to know where your water has been.

The Safe Drinking Water Act sets national standards for public water systems and requires utilities to issue annual reports about the condition of their water. (Check here to see if your local report is posted online.)

These reports, however, must be read carefully, cautions the Campaign for Safe and Affordable Drinking Water. The yearly averages of contaminant levels can be misleading. For instance, a fluctuation above the legal limit for a contaminant may occur during the year without a SDWA violation being cited. Nitrate levels, for example, may spike during the spring when heavy precipitation increases fertilizer runoff.

The maximum allowable levels for a contaminate might also not safely apply across the entire population. Pregnant women, infants, and those with compromised immune systems are at a greater risk for some contaminants, such as the parasite cryptosporidium. High doses of nitrates also pose a possible lethal threat to babies younger than 6 months. If you belong to one of these groups (Babies, ask permission first!), click here for more information.

Currently, the E.P.A. is considering increasing protection from sulfates and perchlorate, an ingredient of rocket fuel. Visit this E.P.A. site for a list of contaminants and their possible health affects.

Meanwhile, Americans who take water from private wells are responsible for their own testing and maintenance. They should be aware of possible pollutions sources such as nearby farms, construction sites, septic tanks, drycleaners, airports and golf courses.

But Alison W., before you run screaming from your sink to the nearest bottle of cold island waterfall, alpine-flavored, glacier-filtered French water, you should know that the safety of bottled water is no more guaranteed than tap. Contaminants can find their way to even the most remote mountain spring. A study conducted by the Natural Resources Defense Council found that a third of the bottled water it tested contained some level of contamination.

From the mineral-rich and vitamin-enriched to plain bottled tap water, regulations for bottled water also vary as much as the water itself. The Food and Drug Administration only regulates water that is bottled and sold in different states. State bottled water standards differ as well.

Still scared? Thought so. There is always the option of filtering, boiling or adding iodine to your eight glasses a day – though this may be inconvenient for the only mildly paranoid. But if you read your utility report or research your bottled brand of choice (its origin and your state’s standards), you can at least move on to other frightening things–like the air you are breathing.

I know my high school teacher ran into a problem with her son. Apparently, his teeth were turning brown because of the high content of fluoride in their tap water. They got the annual report and discovered the problem. I think they ended up moving to another house just to get different (in other words, less fluor-ific) tap water!

the new york times ran a piece by Anthony Depalma on july 20th about new york city’s water system becoming more muddy due to increased development and storm run-off upstate. it mentioned that the nyc water system, due to it’s purity, is largely exempt from federal water filtration requirements. it also said
“To keep the tap water running clear, the city has been dumping 16 tons of chemicals a day, on average, into the water supply as an emergency measure to meet federal water quality standards. The treatment does not change the taste of the water, but the city cannot rely on this stopgap approach forever.”
does this disturb any of you science-types? or is 16 tons/day really a (sorry) drop in the bucket of the system’s volume?