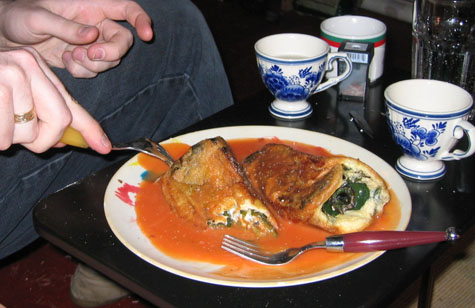 A simple suggestion and a false-memory can completely change one's relationship to food.
[Credit: Molika Ashford]

If your mother told you raw oysters had turned your stomach a few years back, you might think twice about slurping them again. But what if she was just lying? And what if she told the same tale but replaced oysters with a fattening treat like ice cream? New evidence from two studies shows that generating false memories just might be an effective way to diet.

In two studies, researchers at the University of St. Andrews in the United Kingdom and at the University of Windsor in Canada each found that subjects who were told that a particular food had made them sick years earlier not only believed the made-up events but also actually stopped craving the food. Researchers already knew that generating false memories can alter a person’s beliefs, but these studies are the first to show that the practice can change behavior as well.

“Although it’s not ethical to create false memories in people, making an association between eating a fattening food and getting ill may be beneficial,” says Elke Geraerts, a psychologist from St. Andrews and lead author on one of the studies. “People may avoid those foods in the future.”

In the two studies, participants filled out questionnaires about their food history and preferences. Afterward, the researchers fibbed that they had created computer-generated personal profiles detailing the subjects’ experiences with food during childhood. In Geraerts’ study, the researchers told participants that as kids they disliked Brussels sprouts and liked pizza (as most children do), but only half found out: “You got sick after eating egg salad.”

After the suggestion, one-third of those subjects retained the untrue egg salad memory. And when presented sandwich choices one week later, those participants left the egg sandwiches virtually untouched while devouring baskets of ham, cheese, and tuna and chicken salads. Even four months later, the made-up memory remained intact, and the subjects continued to avoid egg salad.

Researchers from the University of Windsor also lied, telling some study participants that a personalized food report revealed that they had become quite ill as children after eating peach yogurt contaminated with Escherichia coli bacteria. After implanting this bogus idea, the researchers found that participants rated peach yogurt less appealing than other foods, such as crackers, and ate about half as much yogurt as those not given the false notion.

It may sound implausible that a mere suggestion could alter recollections or create a new (untrue) memory, but it’s not so far-fetched. “False memories are a well-established phenomenon. This is because all memories are re-creations, not recordings,” says Douglas Fields, a neurobiologist at the National Institutes of Health not involved in the studies.

A recent study conducted at Duke University suggests that these false food memories could slip by as real memories when a region of the brain called the frontal parietal network, which processes the feeling associated with an event, becomes overactive or when the posterior medial temporal lobe, which checks conscious memory for facts and events, isn’t doing its job. Using fMRI scans, the researchers found that when subjects believed a memory was true, they showed increased activity in the medial temporal lobe. However, when subjects thought a false memory was true, they exhibited increased activity in the frontal parietal network.

Although not yet tested for combating obesity, manipulating memories could provide a new way to help curb a person’s appetite for fatty treats. Before researchers implement the false-memory diet, they need to learn more about the mechanism underlying the phenomenon and overcome ethical hurdles, says Elizabeth Loftus, co-author on the U.K. study and a psychologist at the University of Washington who specializes in human memory.

Getting approval to use the technique for weight loss without letting the subject in on the secret would be tough. “Practically speaking, a subject can’t sign up for this technique if he wants to stop eating pecan pie,” Loftus says. “Getting permission without divulging what you’re going to do still poses a challenge.”

Studies like this have been reported online and by the media so many times that you’d think someone had actually lost some weight!

Thanks for sharing the tips!
I have got some overweight problem and nothing cold help, its time to try something new.
Regards,
Anie