Big problems can have small solutions. That’s what I learned this week when I visited Brookhaven National Laboratory’s Center for Functional Nanomaterials on Long Island, New York. Research in the […] 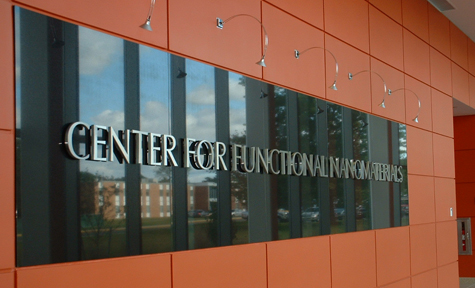 Big problems can have small solutions.

That’s what I learned this week when I visited Brookhaven National Laboratory’s Center for Functional Nanomaterials on Long Island, New York.

Research in the center’s new facility, which opened in May 2007, has one major theme: energy. Its scientists study and design nanomaterials, materials made from extremely small components, with the goal of improving alternative energy technology.

For example, a major research effort at the center is to design nanomaterial catalysts that create energy sources more efficiently. One project aims to create a catalyst that splits water molecules into its components oxygen and hydrogen. This could be used as a method for generating clean-burning hydrogen fuel.

Another research area looks at ways to improve solar power technology, making it more efficient and less costly. Scientists study and manipulate materials at the atomic level to enhance the process of converting sunlight into electricity.

To appreciate the scale of nanomaterial research I had to redefine my notion of tiny. Nanomaterials science deals with matter at the atomic scale–about 100 nanometers or smaller. To put in perspective how small that is, the diameter of a human hair is about 80,000 nanometers.

Creating such small nanomaterials is done in two ways: chipping away at bigger objects or building up from smaller particles. Etching bigger materials down to smaller ones, known as patterning, must be performed in a clean room. This room is necessary because “A dust ball will look like a giant boulder on top of your pattern,” according to Mark Hybertsen, a nanomaterial researcher at the center.

Researchers also build up nanomaterials using biological molecules as guides for assembly. For example, DNA strands can be used to link together small gold particles in a specific manner to form a crystal structure. These novel nanomaterials may one day provide scientists with the tools to manipulate light in new ways or to enhance certain chemical reactions.

The research at this center shows that while the tools may be tiny, the implications are by no means minuscule.

Silver nanoparticles could be the next step forward in antibacterial products.