Physicists hope to unlock the mystery of this bizarre substance. 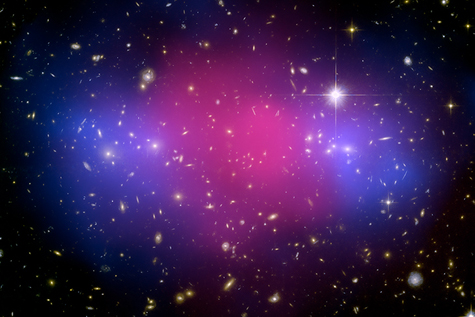 It may seem like the matter that makes up everything we see, from planets to people, is the main component of the universe. In reality, there’s only one-fifth as much of this ordinary matter as there is “dark matter,” an elusive substance with properties different from everything else in the cosmos. Thanks to a new analysis of a collision between two groups of distant galaxies, scientists may now be closer than ever to understanding the nature of this dark matter.

Since it does not give off or absorb light, dark matter can be detected only through the gravitational effect it has on other objects. The crash of the two galaxy clusters 5.7 billion light-years from Earth provided just such an opportunity to study dark matter’s puzzling characteristics, according to the authors of the new analysis, which will appear in an upcoming issue of The Astrophysical Journal.

The crashing galaxies formed what researchers call “Baby Bullet,” a hamburger-like conglomerate of hot gas—ordinary matter—sandwiched by two strips of what appear to be dark matter.

“As the two clusters collided, the [balls of] gas stuck to each other and slowed down, while the dark matter flew through,” says study collaborator Tommaso Treu of the University of California, Santa Barbara.

The image of Baby Bullet that scientists analyzed is a composite of pictures taken by the Hubble Space Telescope, which detected the burger’s total mass, and Harvard University’s Chandra X-Ray Observatory, which measured the amount of “normal” mass present. Subtracting this ordinary matter from the total left a sizable difference in mass that scientists say is dark matter.

“[Baby Bullet] is confirmation that dark matter exists and that it’s weird in that it doesn’t behave like ordinary matter,” says Marusa Bradac, also of University of California, Santa Barbara, who led the study with Steven Allen of Stanford University’s Kavli Institute for Particle Astrophysics and Cosmology.

Baby Bullet shows that, aside from gravity, dark matter does not feel the influence of other physical forces, such as electromagnetism, or even other bits of dark matter. That’s how the dark matter “buns” on both sides of Baby Bullet’s hamburger of hot gas passed through each other instead of combining like the ordinary matter did, says Bradac.

This ability of one clump of dark matter to slide through another makes its particles unique among those currently known in the universe. Protons and electrons, for example, have opposite charges and attract each other, forming the atoms of which ordinary matter consists. “Dark matter interacts only very minutely—if at all—with itself or with other dark matter particles,” Bradac writes in an e-mail. “Dark matter has mass, but that’s it.”

Although there is nearly five times as much dark matter as ordinary matter in the universe, its properties remain mysterious. “Dark matter is strange,” says New York University particle physicist David Hogg. “It’s surprising that there is such a substance in the universe because everything else we know has tons of complex interactions.”

Observations of phenomena like Baby Bullet hold great potential for increasing our understanding of the universe, so it’s crucial to figure out where dark matter comes from and why it behaves so differently from the ordinary stuff, says study collaborator Richard Massey of the Royal Observatory in Edinburgh. “Dark matter seems to be a very unusual, counterintuitive substance,” he writes in an e-mail. “We know that much about it, but that is about all. The pressure is now on particle physics to explain the origins of dark matter.”

By revealing how the building blocks of our universe interact, Baby Bullet could help us better understand the cosmos. Massey hopes that astronomical research, combined with findings from the Large Hadron Collider, could reveal “the ingredients of the universe and how it behaves. It is rather humbling to think that modern science has only really begun to study the universe,” he says. “Physics still has a long way to go.”

Was the Big Bang really how our universe began?

How is it possible that the universe was created by a single Big Bang?