New stellar speedometers may help astronomers solve some of the universe's biggest mysteries. 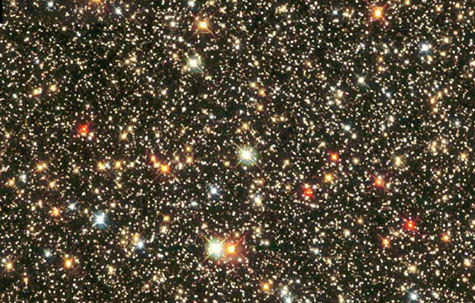 The twinkling starlight of the night sky is not just pretty to look at—it also carries with it the secrets of distant suns.

From this light, scientists can glean information about what stars are made of, as well as the speed and direction of their movements across the heavens. This data, in turn, can help unravel riddles about cosmic expansion and reveal if other Earth-like worlds exist.

Now, German researchers have more accurately scanned starlight for these telltale details, according to a September study in the journal Science. The paper’s authors tested an improved stellar speedometer, called a laser frequency comb, on a telescope for the first time earlier this year. Scientists say the Nobel Prize-winning technology, which debuted in 2005, still needs some work. But it may prove a big step forward in astronomical research.

“I’m very excited about the discoveries this laser frequency comb should make possible,” says Thomas Udem, an author of the paper and an optical physicist at the Max Planck Institute for Quantum Optics in Garching, Germany.

For its first trial run, researchers hooked the speedometer up to a telescope in Germany in March and took basic readings of the Sun’s light. The comb device looks like a large oven-pan-size motherboard of circuitry with cables running to other instruments and monitors. Nevertheless, this contraption helps astronomers tease out important information from the complexity of a star’s light.

As stars travel through the universe, certain signatures in their light move, too. Scientists are after these so-called spectral lines that result from elements like helium and oxygen heating up in stars. When starlight is splayed out by a prism, the lines look like thin, dark gaps in the rainbow of colors that the human eye can see, called the visible spectrum. Each element, from hydrogen on up, possesses its own unique barcode of spectral lines.

When a star moves away from Earth, these spectral lines shift toward the red, low-energy part of the spectrum. This happens as light waves and their sets of spectral lines stretch out while spanning the trillions upon trillions of miles between their stellar sources and our telescopes. This wave-stretching phenomenon, called the Doppler Effect, works for both sound and light: Think of how an ambulance’s siren fades as the vehicle zooms off, says Udem. For sound waves, this expansion means lower pitch, while for light it means longer, redder wavelengths.

Accordingly, spectral lines shift into the bluer, higher-energy end of the spectrum when a star is getting closer, just as an approaching ambulance siren gets louder. By spotting these blue or red shifts, scientists can tell if stars are heading hither or thither. To detect these usually small shifts, scientists need a standard for comparing the shifted light to normal, unshifted light, says Udem.

Laser frequency combs answer this need for greater precision by using laser pulses to generate many distinct energies of light. This light is filtered through a prism, which then makes evenly spaced “spikes” on a spectrum. These spikes correspond to “teeth” in the comb, says Udem.

By way of another analogy, this “color ruler” has clear separations between units so scientists can more easily read the pattern of spectral lines in a star’s light, says Michael Murphy, a co-author of the paper and an astrophysicist at Swinburne University of Technology in Hawthorne, Australia. The light collected by the telescope is routed through the comb, which overlays its own color ruler on top of the incoming spectrum from the stellar object of interest.

Current telescope calibration techniques use special lamps containing elements like thorium and argon to set spectral lines for comparison. “But these lamps change over time and can throw off your results,” says Scott Diddams, a physicist at the National Institute of Standards and Technology in Boulder, Colo., who is also working on laser frequency combs.

Measures of stars’ velocities vary by 10 meters per second with present instrumentation—too much to suss out some finer details, like Earth-sized planets. But with comb calibration, the German team achieved state of the art variation at nine meters per second, says Udem, even though some equipment of theirs, like the atomic clock that ensures accuracy, was modest in capacity. Theoretically, 1000-fold more precision should be possible, he adds, down to one centimeter per second.

Once armed with precision of that caliber, scientists plan to investigate the universe’s expansion to see if it is really accelerating. Current evidence, like the extreme red shifts of distant supernovae, indicates this is so, but finding a mechanism for this galloping growth has baffled cosmologists. They have proposed the existence of a mysterious, as-yet-undetected force called dark energy as a tentative explanation.

Probing this acceleration will be an ambitious, 20-year project, says Udem. The proposed experiment would track far-flung young galaxies called quasars on a massive telescope, appropriately called the European Extremely Large Telescope, which is not slated to begin operating until nearly 2020. The extent of the quasars’ red shift over the planned two-decade period of observation should indicate if they are receding at a quickening rate.

Laser frequency combs should also enhance the detection of small, Earth-like exoplanets that orbit other stars, says Udem. Planets cause gravitational disturbances in their suns’ velocities by tugging them back and forth, making the stars appear to wobble very slightly. With today’s astronomical equipment, though, scientists have a hard time finding Earth-size exoplanets because they generate such small wobbling effects.

“These experiments are really screaming out for help from frequency combs,” says Swinburne’s Murphy.

For now, the technology is still too cutting edge to produce immediate, significant results, says Udem. The combs will need more teeth, for example: The device that his team used in Germany only provided calibration in the infrared part of the spectrum. (Elements produce spectral lines in the infrared, too, not just in visible light.)

Even so, a U.S. team will try out a laser frequency comb this fall when hunting for exoplanets around some low-mass stars—the first test for such a device on a star other than the sun. “It’s one step at a time with these instruments,” says Ronald Walsworth, a physicist at the Harvard-Smithsonian Center for Astrophysics in Cambridge, Mass., who is involved with the effort.

The final design specifications, based on which telescopes use them, will determine the combs’ overall costs, Udem adds.

Researchers hope that this calibration tool will push the limits of cosmological discovery. Yet another test made possible through enhanced instrumentation is exploring if the laws of nature—as we understand them—hold true in distant, ancient quarters of the cosmos, says Udem. The speed of light and power of gravity, for example, “could just be sort-of ‘by-laws’ for our local time and place in the universe,” says Murphy. If these physical constants turn out to be variable, then this finding may break new ground on the fundamental theories of how the universe works “that people have been chasing since Einstein,” says Murphy.

And that’s just what’s on the docket so far. “It’s possible that new experiments that we have not even thought of before will pop up,” says Murphy, “and lead to revolutionary results.”

How the universe can expand faster than the speed of light.

What existed before the Big Bang.

What do we know about cosmology? And what is still a mystery?

You’ve heard how LFCs (laser frequency combs) are on the rise, but why’s the LHC (Large Hadron Collider) on the fritz?