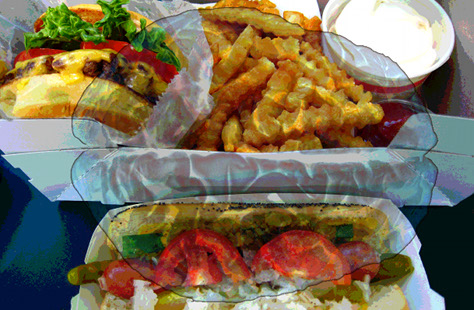 When people have food on the brain, a spike in dopamine can cause them to want food even though they
may not need the energy. Researchers are trying to better understand the chemicals involved in this
process to help people fight obesity. [Credit: umami and EUSKALANATO, flickr.com. Compiled by
Shelley DuBois].

It’s Thanksgiving dinner. You’ve savored every course up to dessert, and a thick slice of pumpkin pie is set on the table right under your nose. You can feel your waistband tightening from all the turkey, stuffing and gravy churning in your stomach, but the pie smells too good to resist.

The signals firing in your brain telling you to take a bite or call it quits for the evening are the same cues scientists are now exploring to determine the causes of obesity and how to treat it.

Two hormones, leptin and insulin, are part of your body’s natural system responsible for maintaining a healthy weight. They signal to the brain that you should stop eating when you’ve had enough food to meet your metabolic needs. Right now, they’re probably screaming at you to pass on the pumpkin pie. Research shows that people who are lacking in these hormones will ignore cues to stop eating, and subsequently overeat and gain weight. But this doesn’t seem to be what’s happening in the brains of most obese individuals.

“Obese people have plenty of leptin, and for the most part it works,” says Stephen Benoit, a University of Cincinnati psychologist, who adds that there is also nothing wrong with their insulin levels.

Some scientists think that overweight individuals are becoming resistant to the signals that tell us we’ve eaten enough. The brain may be pumping out cues to stop eating, but we simply don’t hear them. This theory only provokes more questions. “Where that leptin resistance and insulin resistance occurs no one actually knows,” says Nicholas Bello, an obesity researcher at Johns Hopkins University. If resistance developed, obese people would need more leptin and insulin to produce the same feeling of fullness.

It’s possible that the programmed response to leptin and insulin — to put down the fork and save the leftovers — is being hijacked by a stronger signal telling you to keep eating. That signal may be the hormone dopamine. “Dopamine is probably the major determinant of the motivation to eat,” says Leonard Epstein, a psychologist at The State University of New York at Buffalo.

When you smell that pumpkin pie in the oven, and again when you take the first delicious bite, your dopamine level spikes. But, “if that food is yucky, your dopamine won’t increase,” says Dr. Gene-Jack Wang, a longtime obesity researcher who heads the medical department at Brookhaven National Laboratory on Long Island, New York. Not surprisingly, your biological drooling only happens over food that tastes good.

Dopamine levels might tempt you into having the pie, even though you don’t need its added energy. “When animals get access to highly palatable, energy-dense foods, they simply ignore their satiety signals,” says Benoit, the Cincinnati psychologist. Over time, the body resets its dopamine meter and needs more food to get the same hormonal response. Leptin and insulin can help decrease dopamine release to make food less rewarding when it’s time to stop eating, but resistance to these hormones — or the sheer strength of the dopamine response — could be throwing a wrench in this system.

Observable differences in the dopamine systems of obese and non-obese individuals have made dopamine the hot hormone in current obesity research. Dopamine carries out its actions by attaching to receptors in the brain, and obese people seem to have fewer of these sites where dopamine can bind. One hypothesis is that obese people eat more to release extra dopamine to make up for a lack of these so-called D2 receptors in the brain and decreased natural dopamine activity.

But some scientists disagree with this reasoning. Dr. Alain Dagher, a neurologist at McGill University in Montreal, argues that having fewer dopamine receptors doesn’t mean there is less dopamine activity in the brain. “It may be that people who have [fewer] dopamine receptors actually release more dopamine,” he says.

Corroborating earlier research, a study recently published in Science by Yale University psychologist Dana Small and her colleagues found that individuals with a certain genetic code have fewer D2 receptors, and are more likely to be obese. Thus, one factor involved in obesity appears to be at least partially genetic. Having fewer D2 receptors than normal might correspond to an increased motivation to eat, but it’s not equivalent to an obesity sentence. “Some people exercise a lot and they use their energy, even if they have low dopamine D2 receptors,” Wang says. “They’re still very thin.”

Despite dopamine’s recent popularity among researchers, it’s only one piece of the obesity puzzle. “Although dopamine has gotten a lot of press, there are still a lot of other neurosystems involved in eating that might be just as important,” Bello, the Johns Hopkins researcher, says. Ghrelin, GABA and serotonin are just a few of the other hormones and neurotransmitters known to have a role in eating behavior.

This complexity makes the debate over pharmaceutical treatments for obesity as intense as the arguments over its causes. Medications being tested target almost every known biological variable in the eating process, but none are very far along in development, says Cincinnati’s Benoit. One drug that showed promise, rimonabant, was pulled from the market in Europe last October when it was linked to depression.

Benoit believes an effective obesity medication would be one that targets multiple systems, for example, turning up the leptin signal while turning down certain reward signals, like dopamine. But, like rimonabant, this kind of drug could have significant side effects. If food urges are decreased, some researchers worry that urges for addictive drugs might take their place. “You might stop eating, but you might be addicted to [another] compound that works on the dopamine system,” says Bello.

Also, no drug will help combat obesity if people don’t change their lifestyles to eat a healthier diet, according to Brookhaven’s Wang. Bello agrees. “What I think has to happen is not [engaging] in those behaviors of overeating highly palatable food that could alter the dopamine system,” he says.

Easier said than done, as anyone sitting in front of that mouth-watering piece of pie could tell you. And unfortunately, someone who was once obese may always be stuck with the impulse to eat past fullness, even if weight loss is achieved and maintained. “Once you’re obese, it’s unlikely you’re ever going to get away from that drive to return to that higher body weight,” Benoit says. “I know of no evidence that suggests that you ever get better.”

Is gastric bypass worth the risks for teenagers?