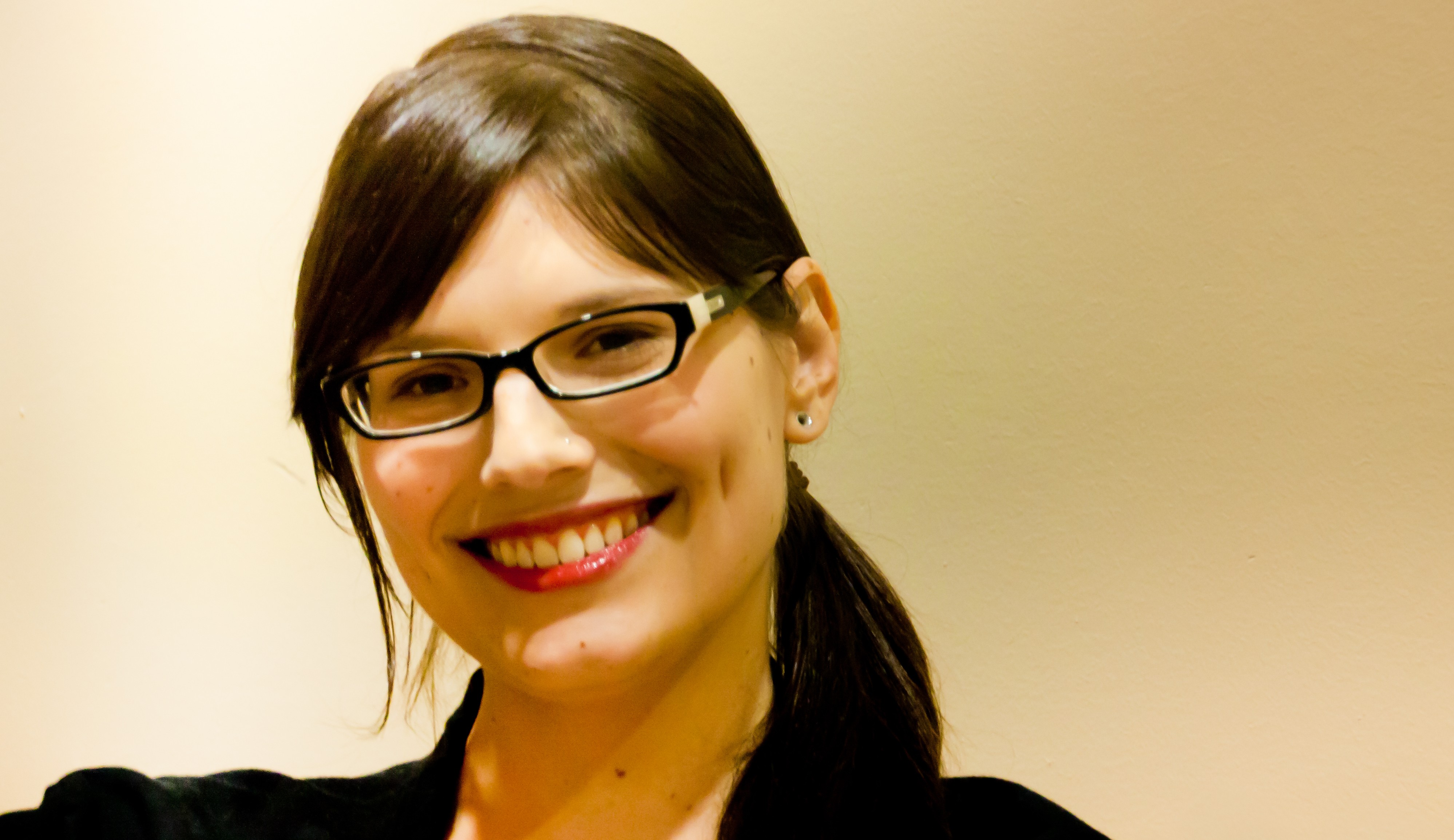 Claudia Astorino wants to get the word out about the way intersex individuals are treated by medical professionals [Image Credit: Arielle Duhaime-Ross]

One of the most thoughtful gifts Claudia Astorino ever received was “The Period Book: Everything You Don’t Want to Ask (But Need to Know)” about menstruation. Her girlfriend gave her the book as a gag. But the curious 28-year-old ended up reading it cover to cover. That’s because Claudia was born with a combination of sex traits typically thought of as both “male” and “female,” and will never have a period herself.

“It’s actually really tricky to be a person who looks female and is expected to have conversations about periods when you have no idea what it’s like,” says Claudia. “I felt like ‘The 40-Year-Old Virgin’ of periods.”

As the associate director of Organisation Intersex International USA (OII USA) and the author of a blog called “Full-Frontal Activism: Intersex and Awesome,” Claudia has given talks at New York University and the University of California, Davis, about what it means to be an intersex individual. She also recently published her first essay on Autostraddle. And that’s just when she’s not busy working on her Ph.D. in physical anthropology at City University of New York.

Claudia admits that it took her a long time to embrace being an intersex person.  “It was overwhelming,” she says. “I remember trying to process and think ‘Oh I’m a girl, but I’m not?’”

At first, doctors didn’t notice anything different about Claudia. But a few months after she was born, she developed a hernia and had to have surgery. It was during this routine procedure that the surgeon noticed something unexpected. “My gonads didn’t appear to be ovaries,” says Claudia. “They were testicular.”

Claudia has XY chromosomes, so one could say she was fated to be male.  But biological sex isn’t just about the X and Y chromosomes you inherit from your parents. Genes and hormones also play a role in determining what sex we end up resembling most closely. In Claudia’s case, a gene on her X chromosome caused her cells to be unresponsive to androgens.

“Receptors are molecular hands on the outside of a cell that can grab onto chemicals so they can be processed inside the cell,” she says. “My little molecular hands weren’t shaped in the right way to grab onto testosterone.” And when testosterone isn’t used, it gets converted to estrogen, so Claudia developed on a typically female trajectory, looking female externally.

But on the inside, she has no uterus.

When the doctors discovered that Claudia was a CAIS individual, they told her parents that she would risk developing testicular cancer if her testes were not removed. So Claudia ended up having a second surgery when she was just a few months old.

According to a 2007 study, if Claudia had kept her testes, she would have had a two to three percent chance of developing a tumor by the time she hit her twenties. And the most cited long-term study, conducted in 1976 and including 320 CAIS cases, determined that by the time she hit 50, Claudia would have had a 33 percent chance of developing cancer.

But scientists have done precious little since then to determine the long-term odds of an intersex individual developing cancer in their testes. This makes it nearly impossible to determine if the procedure should still be taking place today — and yet it still does. Physicians say that they would rather cover their bases than risk the lives of these children.

But Claudia wishes doctors hadn’t removed her testes. Because of the surgery, Claudia has to take an estrogen pill everyday to maintain her bone health, just as post-menopausal women do to prevent osteoporosis. Had her gonads been left intact, her testes would have supplied the much-needed hormone. “When females are born,” Claudia says, “doctors don’t say, well, about 12 percent of women will develop breast cancer at some point in their lives, so we have to cut off everyone’s breast tissue at birth.

When she turned eight, Claudia’s doctors told her that she didn’t have a uterus, so wouldn’t menstruate or be able to give birth. She didn’t find out she was intersex until she turned 13.

And even then, her doctors only explained CAIS as a medical condition and a social liability that her classmates would tease her for if they found out about. Because of patient-client privilege, they were reluctant to put her in contact with other intersex children. They never provided her with resources to help her understand what intersex was and what it meant to live as an intersex person.

Instead, her doctors summoned her to the hospital every six months between the ages of eight and 16 to undergo painful dilation procedures to lengthen her vaginal canal. “Without it, doctors think it won’t be possible to have ‘normal sex,’” which to them meant “penis and vagina intercourse,” she says.

Claudia says that no clinician or parent can accurately predict who their child will be attracted to or what kind of sex they’ll want to have someday—no more than they can predict their child’s favorite color or most-hated vegetable.

“I turned out to be gay,” she says. “I don’t want to have the heteronormative sort of sex doctors and parents assume their children will have someday.”

Claudia believes that these procedures hurt all kids, not just those who are gay and bisexual. To her, the treatments amount to nothing more than having a person in a position of authority alter the most intimate parts of your body without your consent. “And the fact that kids undergoing these procedures may grow up not even wanting to [have that kind of sex] is another layer of messed up,” she says.

Dr. Walter Miller, chief paediatric endocrinologist at the University of California at San Francisco, disagrees. “I think that’s kind of crazy,” he says of people who tell him that doctors should wait until intersex children grow up before operating. “That’s sort of like saying ‘Well your baby has a cleft lip but why don’t you wait until your daughter is 18 to have her cleft repaired,'” he says.  “If somebody said that you would be taking the child to protective services.”

But he does admit that the medical community has mistreated intersex individuals in the past. “Back in the 60s and 70s, genital reconstruction – a type of surgery that many intersex individuals with other forms of intersex require – was poor and crude,” he says. “Surgery is not a science, it’s an evolutionary art, so you try things and eventually the procedures improve.”

Over time, Claudia became increasingly angry at her lack of understanding about her body and the medical procedures she had to undergo. But it wasn’t until she stumbled upon an intersex activism website during her second year of graduate school that she understood why. “They said these treatments are just to trying to normalize us. That was the first time it clicked,” Claudia says. “All this stuff that was happening to me was not for my medical benefit.”

Claudia wanted to be one of those activists, so she started writing a blog. And in 2010, she organized the first East Coast Intersex Awareness Day events.

“Claudia, in her heart, is a human rights activist,” says Hida Viloria, an activist who has appeared on Oprah and is the director of OII USA.  “She is someone that is really looking out for her fellow humans, period.”

Viloria believes Claudia has a healthy distrust of the medical establishment. “I haven’t met too many young people with whom I’m on the same page in terms of their awareness of the dynamics of intersex phobia. But Claudia is.” And for Viloria, Claudia’s deep understanding of the mechanics of discrimination – how it works systemically – is Claudia’s greatest asset as an activist.

Claudia, who identifies her sex as intersex, her gender as genderless and her sexuality as queer, believes that “sex is as fluid and diverse as gender.” So she wants doctors to stop altering intersex bodies for reasons that are not medically justified. Dilation procedures and surgeries to remove sex organs or to make a child’s external genitalia look “normal” should be prohibited until intersex individuals reach adulthood, she says. Claudia advocates that intersex individuals should “be legally recognized as a population that needs protection.”

Is society ready for that? “People in the 1950s weren’t ready for the civil rights movement,” Claudia says. “There’s never a right time to change your entire world view.”

Claudia worries about the future – about her own bone health and about discrimination against intersex individuals. But right now, all that matters is getting the word out. “I want people to look at the complexity of our bodies, and embrace the fact that people don’t all fit neatly into male or female boxes.  And that is more than okay.”

The similarities between healthy but statistically uncommon types of genitalia and a cleft lip, as made by that quoted doctor, are lost on me. The comparison between removing all breasts for risk of breast cancer and this issue, however, resonates deeply.

This is an article and a story to open minds and help to change them, I think.

Claudia, I applaud you. I was born intersex. My mom made all my decisions. She refuses to acknowledge or tell me anything. The little I know is from my grandmother. I agree with you whole heartedly.