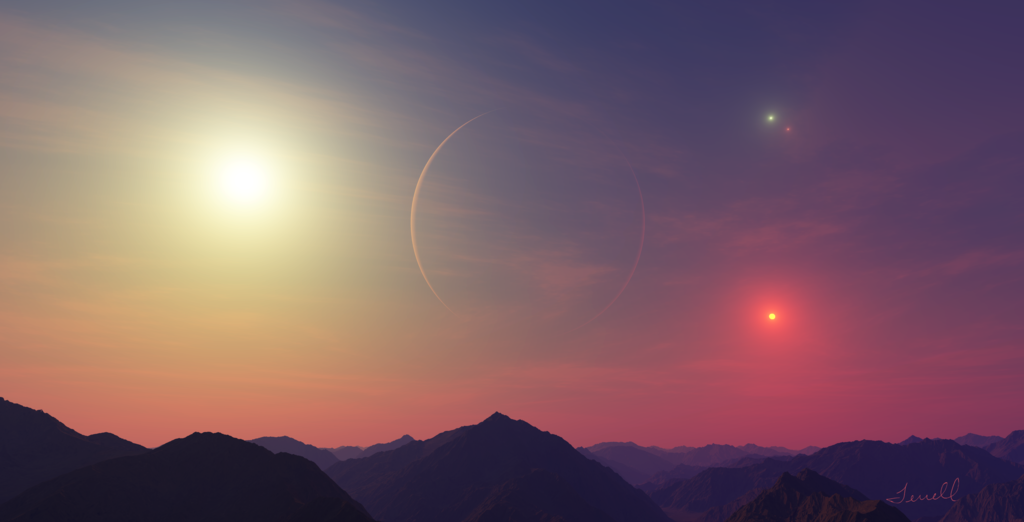 An artist’s imagined rendition of the view from PH1, an exoplanet with four suns [Image credit: Dirk Terrell ]

Back in 2011, when Robert Gagliano first noticed a dip in the brightness of a star that was almost 5,000 light years away, he marked it down and shelved it. He had simply been doing what thousands of other amateur astronomers around the world were doing — looking for signs of extrasolar planets by sifting through raw data from NASA’s Kepler space telescope posted on a newly launched planet-hunting website called planethunters.org.

Once again, on March 6, 2012, the star’s brightness dimmed and came back up again. Gagliano perked up, hoping that a pattern was emerging. When the dimming reoccurred 132 days later, he was confident he was on to something. By then, Kian Jek, another amateur astronomer, had also noticed the pattern, and together they alerted Yale University astronomer Megan Schwamb, who put together a team and undertook a rigorous six-month test. It turned out that they had in fact stumbled upon a planet with four suns; it was fondly nicknamed Tatooine, after Luke Skywalker’s home planet in the Star Wars movies.

Discoveries like Jek and Gagliano’s are becoming more and more common. In 2012 alone, amateur astronomers have observed explosions on Jupiter, discovered comets, combed through data to collectively map out the surface of the moon and followed changes in the brightness of variable stars.

But they have not made these discoveries by enduring cold nights and camping out with a telescope. They have made them indoors, on a computer. Amateur astronomers are increasingly making scientifically significant contributions by sorting through images of the Milky Way galaxy, cataloging craters on the moon and poring over data from international telescopes. Since more and more astronomical data are freely available to the public – far more data than professionals can analyze themselves – amateurs are stumbling upon interesting finds without venturing out of their homes.

“We are coming into the era of big data,” said Arne Henden, director of the American Association of Variable Star Observers, an organization that promotes collaborations between amateur and professional astronomers. Telescopes like Kepler, Sloan Digital Sky Survey and Hubble are generating billions of images of stars every year, he said.*

Although the professional researchers officially working with those telescopes do run these images through software, looking for specific patterns that indicate the presence of interesting stellar objects, they often miss things because so much data are coming in. This is where amateur astronomers are now playing a big role. Armed only with personal computers, they explore the deluge of available data trying to spot something the professionals may have missed.

Astronomy isn’t the only field where the power of crowdsourcing is being put to use. Zooniverse, the web platform of which planethunters.org is a part, calls on members of the public to identify species along the Northeast continental shelf, classify bat calls and archive cancer samples.

Zooniverse’s most recent project, called the Snapshot Serengeti, asks users to classify the different animals seen in the pictures taken in Tanzania’s Serengeti National Park. Since the project set up over 225 cameras in the park, their data set is too large to be manually archived by researchers alone. Conveniently, the task itself is simple enough to teach in a short tutorial making it an ideal citizen science undertaking.

As a result, these citizen participation websites have become hugely popular, with hundreds of thousands of contributors to each. For instance, when Rob Dunn, an ecologist at the North Carolina State University sent out an open call for swabs of peoples’ belly button, he received hundreds of samples from curious members of the public.

But astronomy has been the most conspicuously successful realm for citizen science, perhaps because there is so much data available. In the case of the four-sunned planet, Jek and Gagliano were looking at data from the Kepler telescope that professionals had already run through several algorithms. But since the human brain is far better at identifying patterns than any computer program, the two amateurs were able to make the necessary connections – especially the star’s dimming at predictable intervals – leading to the discovery of a unique planet.

These days, the traditional model of astronomy has shifted, maintains Chris Lintott, an Oxford University astrophysicist himself. For most of the twentieth century, until the 1990s, amateur and professional astronomers worked disparately to collect and analyze scarce data. But with the rise of large telescopes, data scarcity is no longer an issue — in fact, there is a vast surplus of data.

“Professionals have created a problem for themselves in that we’ve gotten very good at collecting data,” said Lintott. The Kepler telescope alone measures the light from 170,000 stars every 30 minutes. And in the next few years, larger and more powerful telescopes than Kepler will be operational, including the Large Synoptic Survey Telescope and Atacama Large Millimeter Array, both in Chile, and the Square Kilometer Array in South Africa and Australia.

One reason for the explosion of data is that the processing power of computers has been doubling every two years — the phenomenon known as Moore’s law. As the technology to capture images with greater speed and accuracy emerges and storage capabilities increase, astronomers are confronted with large volumes of data far beyond what they can handle. If amateurs don’t look at this extra data, no one will.

The idea has been harnessed by several citizen science platforms, all of which capitalize on the Internet’s nearly infinite capacity for distributing data. In addition to planethunters.org, Lintott has launched websites to catalog the different craters on the moon and types of galaxies. Beyond simply organizing the data, Lintott believes amateur astronomers can find “the unusual stuff” that software screens generally overlook. Algorithms are good at recognizing patterns that are already known to exist, but if you want to find something completely new and unique, you have to rely on humans.

Websites like Lintott’s and organizations like the American Association of Variable Star Observers are pooling resources by helping professionals and amateurs connect. “There are a lot of amateurs who know more about computers and databases than professional astronomers do,” said Henden, of the Association. In the symbiotic relationship, the professionals have the formal training and access to large telescopes, while the amateurs have the patience and in some cases unusual skills that the professionals don’t.

The discovery of the four-sunned planet finding demonstrates this collaborative spirit. Kian Jek is a computer programmer in San Francisco while Robert Gagliano is an oncologist in Arizona. Megan Schwamb, a professional astronomer at Yale University, helped confirm the finding.

“The Kepler data is a real treasure trove,” said Shwamb, referring to the data set that they were looking at. “With more eyes on the data, we can get every gem in it.”