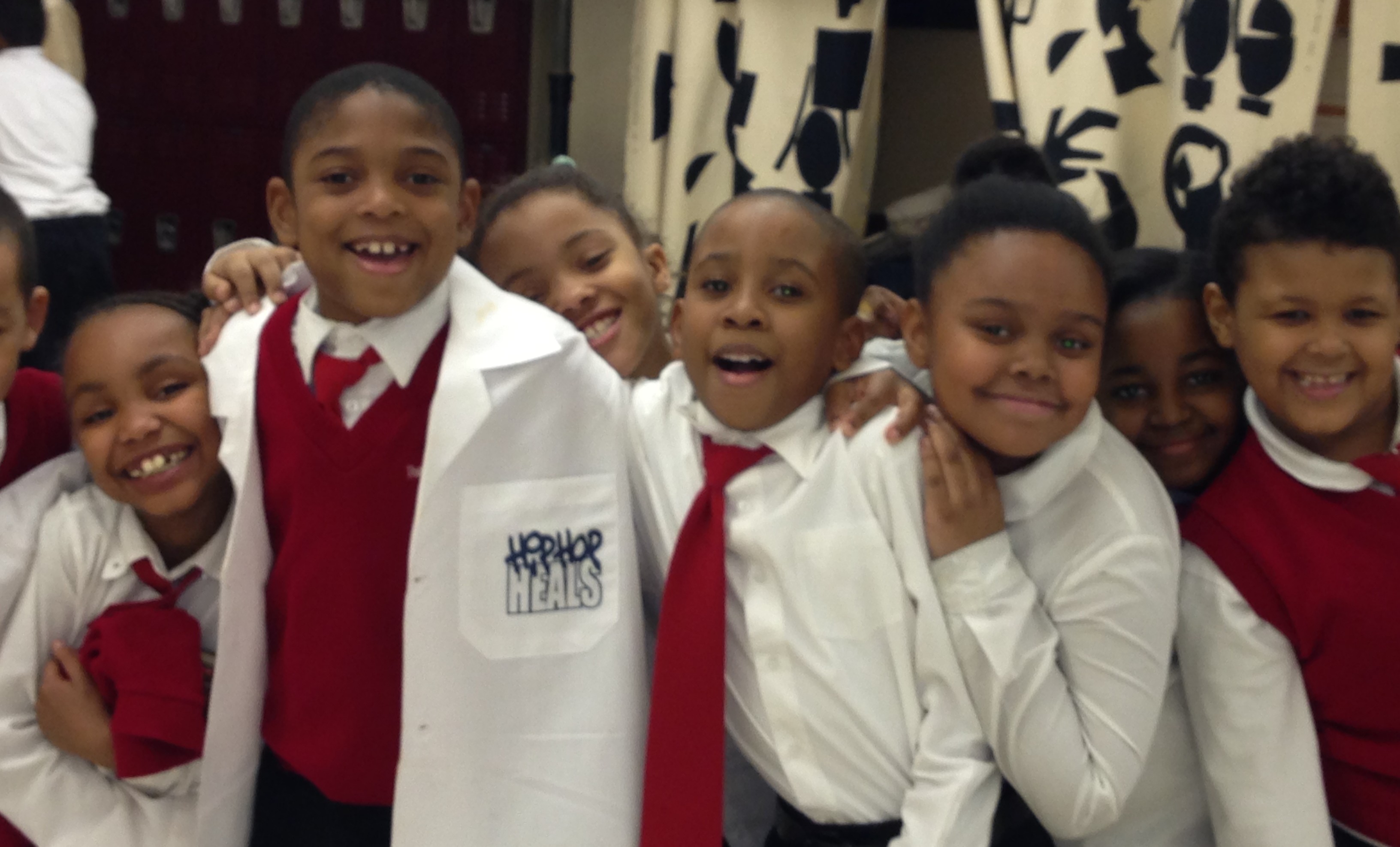 The state of Tennessee versus the theory of evolution

On a cold Thursday morning in mid-February, two dozen fourth graders walked down to the basement of Thurgood Marshall Academy Lower School in Harlem. The lights were off in the cafeteria, which doubles as a gymnasium and after school hangout, and the students were about to take a test.

Shepherded by the confident timbre of Easy A.D., a hip-hop pioneer in his mid-fifties wearing a red Adidas tracksuit, the kids used remote control devices to answer questions on healthy eating. Then, A.D. directed their attention to a Sesame Street-meets-Schoolhouse Rock animated short on a projector screen. “People need calories to move,” rapped a cartoon version of hip-hop artist and famous beat boxer Doug E. Fresh. “People need calories to groove, live, yeah, let me tell you what it is.”

Back in January, the elementary school started a healthy eating and exercise program created by Hip Hop Public Health, an organization that uses hip-hop videos, cartoons and interactive games to teach kids and their families about public health issues. Founded in 2005 by Olajide Williams, a neurologist at Harlem Hospital and Columbia University, it began as a stroke education program and has since expanded its curriculum to include programs on healthy eating, exercise and dementia. Around ten thousand children in New York City schools participate in Hip Hop Public Health programs each year, with more programs being implemented around the country.

While working at Harlem Hospital in the early 2000s, Williams noticed a lack of knowledge of stroke symptoms in his patients, creating a disparity in their ability to seek care. Most of the people he treated were African-American, a population the American Stroke Association claims is at a higher risk for stroke than any other ethnic group in the country. More importantly, he noticed that his patients received a tissue plasminogen activator (t-PA) — a life-saving stroke medication — less than the national average of 2 percent. In Harlem, part of the reason people weren’t receiving the treatment was because they arrived after the critical three-hour window where t-PA is effective.

Because children are often bystanders when a parent or grandparent has a stroke, Williams’ idea was to teach them the signs and symptoms of a stroke, and to call 911 if they witnessed an incident. To develop the project, Williams partnered with the American Stroke Association in 2005, the organization he credits as the program’s early lifeblood. There would be no Hip Hop Stroke without the American Stroke Association, he says.

Using children as conduits for information about stroke recognition and prevention is “quite innovative,” says Salina Waddy, a physician and program director focusing on health disparities at the National Institutes of Neurological Disorders and Stroke, which is part of the National Institutes of Health. Waddy has managed the project and its funding since the NIH approved it.

Educating children directly about stroke symptoms isn’t an entirely new concept; about 10 years ago, researchers from the MidAmerica Neuroscience Institute in Missouri created The Brain Child Project, a program that targeted middle schoolers for stroke education. A 2007 study conducted by University of Michigan public health researchers used children’s homework assignments as a way to share information about stroke between parents and children. “Over the years we’ve realized we need culturally tailored programs in order to help with health disparities,” Waddy says, speaking specifically about strokes.
“Putting stroke education to music is ingenious,” says Dawn Kleindorfer, a University of Cincinnati neurologist. “Hip Hop Stroke is an amazing program.”

Recognizing the signs and symptoms of a stroke can be difficult” because there are so many of them, Kleindorfer says. Not to mention that current education curriculums don’t cover stroke the way they would cover a heart attack, for example. “In children’s textbooks about health, you’ll have a chapter on heart disease, but only a paragraph about stroke,” she says.

Kleindorfer recommends using the “FAST” mnemonic, which covers the main stroke symptoms and stresses the urgency of the event, and is incorporated in Hip Hop Stroke’s curriculum. “F” stands for face (if it’s droopy or uneven), “A” for arms (if one drifts down), “S” for speech (if it’s slurred), and “T” for time.

Pete Colon, a hip-hop artist and lead educator of Thurgood Marshall’s exercise program, Hip Hop F.E.E.T, says that parents can be difficult to reach. Teaching kids, he says, provides them with health information they can use themselves and share with their parents. He points out that the hip-hop medium is useful because it “helps to sugar coat the information so it reaches them.” Colon is learning the ropes from Easy A.D., a hip-hop trailblazer and member of the Cold Crush Brothers, who is a long-time educator for Hip Hop Stroke and currently leads Hip Hop H.E.A.L.S., an ongoing healthy eating program at Thurgood Marshall.

Getting Hip Hop Stroke going required a tremendous amount of work. “It was a real labor of love,” Williams says of the early years. He did what he could to complement the Stroke Association’s limited resources, seeking out collaborator Doug E. Fresh on his own. “I spent a lot of time in the studio at all hours of the night,” Williams says, working with Fresh on developing a memorable song that could make an impact the community. A lot of other public health interventions didn’t engage the public or lacked scientific value, he says. Williams wanted both. “I insisted on a commercial hit,” he says, as well as a song that “had educational value.”

Using hip-hop in the classroom isn’t a new concept, but advocates for the pedagogy technique stress that it goes beyond catchy rap songs. hip-hop is “a culture and it encompasses many elements,” says Martha Diaz, founding director of Hip-Hop Education, an organization based at New York University that conducts research, evaluation, and training support for individuals and organizations who want to develop educational hip-hop programs. Hip-hop was created as a social justice and human rights movement, she contends, and including that culture in the teaching curriculum empowers children and teaches them to be problem solvers.

Even though Williams and his team saw early on how much the children loved the video, comic strip and presentation developed for Hip Hop Stroke, he wanted to show the impact of the program by measuring whether or not children remembered the FAST mnemonic after they learned it. The kids used handheld devices resembling remote controls to record their knowledge before and after the program, allowing for speedy data collection and easier tracking.

Research published in 2008 in the American Stroke Association’s journal Stroke touted the early success of the program and validated his hypothesis that hip-hop could educate kids about stroke. Articles published more recently in Stroke and Neurology continue to support his hypothesis.
“Whether or not it actually impacts people getting to the hospital,” Waddy says, “that’s the harder thing to measure.” Alex DeSorbo, the program manager for Hip Hop Stroke, says that while researchers can’t claim any direct links, they have noticed an increase in t-PA usage at Harlem Hospital after the Hip Hop Stroke program was delivered to area schools.

Waddy is careful to point out that getting to the hospital on time isn’t the only determinant of timely t-PA delivery. “There are a lot of barriers that lead to challenges,” she says. “This one intervention won’t be able to address all of them.” New Yorkers are lucky, she mentions, because there are a lot of hospitals that are certified stroke centers and can handle stroke patients. Many less populated parts of the country lack such centers. Even people who identify a stroke as soon as it happens may never get t-PA because they can’t make it to a properly equipped hospital within that three-hour window.
For now though, Hip Hop Stroke continues to expand its reach, with schools in Brooklyn, Queens and the Bronx also joining the program. Researchers are evaluating parents of students in these schools to see if the children are sharing stroke information at home. According to DeSorbo, the hope is that by tracking these families over the course of a few years, they will be able to show that increased stroke knowledge helps improve outcomes for those families who have the unfortunate experience of a stroke event.

The organization is also evaluating the effects of the newer healthy eating and exercise programs like H.E.A.L.S. and F.E.E.T., especially in places like Thurgood Marshall, where the programs are combined at the school’s request. And although the curriculum may be adjusted or tweaked, dance offs remain a daily ritual for H.E.A.L.S., Colon says, because it’s an important part of the hip-hop culture.
Along with Hip Hop Stroke, the H.E.A.L.S. and F.E.E.T. programs are currently funded by the New York City Council, so they can be provided to the schools at no cost. Money for public health is “hard to come by,” DeSorbo says. Fortunately, Hip Hop Public Health has been a line item on the Council’s budget for a few years now, she says. The Thurgood Marshall program is unique, as the school received a three-year Physical Education for Progress (PEP) grant from the United States Department Education.

An increasing number of individuals and organizations have reached out to the organization, looking to imitate its effects. “People who see the program in action really see the power of hip-hop music as both a motivational and educational tool with the kids,” DeSorbo says. Hip Hop Public Health has been asked to help create programs on hand washing, music therapy and a tailored healthy eating program in Birmingham, Ala. schools. “People are inspired by what they see,” she says.