One man's obsessive quest to optimize the everyday notebook 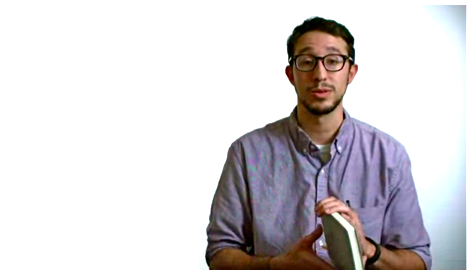 Gap and the Neuroscience of Logo Design

The world is powered by creation. Your favorite new gadget likely began as a thought in someone’s head. The paper notebook, on the other hand, is a very old tool — it can’t track your sleep, give you directions or call your mom. What it can do is help ideas come to life.

Joey Cofone, a 27-year-old designer, believes idea generation is “the most beautiful hobby, profession and passion a person can have.” But his long-trusted notebooks weren’t getting the job done. So, fueled by frustration, he’s launched a redesign.

His idea is Baron Fig — a notebook/sketchbook with carefully selected features to make it the most practical and user-friendly book out there. It’s covered in a durable gray cloth, has a yellow bookmark and comes in a purple box. The colors represent Apollo and Dionysus, the ancient Greek gods of order and chaos, from which the symbols baron and fig are derived. It fits in one hand — shorter and wider than the typical Moleskine — so the full page can be used. Its 192 acid-free pages are thick for minimal bleed-through, bound so the book lies flat and can be lined, blank or dot-grid. At the end of the book are 12 perforated pages, for thoughts to be shared without inhibition. The design is intentionally simple and minimalist: The only place you’ll find branding is on the bottom of the left rear end page.

Last September, Baron Fig’s Kickstarter campaign raked in its initial $15,000 goal in the first 48 hours, finishing its month-long stint with more than $168,000. The books were shipped to 4,242 Kickstarter backers in January and will be available for purchase online in March for “less than a standard $18.95 Moleskine,” according to Cofone.

The Baron Fig, however, didn’t just appear out of thin air. The notebook’s creation has been a long and passionate journey from amorphous idea to tangible product.

“I’ve gone through at least a hundred notebooks,” Cofone says. Yet he never felt comfortable with any of them. Most didn’t lay flat, some were too tall, none ever had enough pages, and his pen often bled through. Instead of focusing on what he wanted to write inside his notebooks, Cofone found himself distracted by the tool itself, and he couldn’t stop thinking and talking about it. In April 2013, he stopped running his year-old design studio and got to work.

The next week, Cofone spent one day hustling around the city like a madman, feeling and scrutinizing countless fabrics and papers for his new notebook. He purchased a few things he really liked, went home and got on YouTube to figure out how to bind a book. Six hours later, Cofone’s very sticky hands placed the first Baron Fig on his kitchen table. “It was extremely ugly and nowhere near perfect. I used a Honey Nut Cheerios box as the cover,” he says. The next day, he presented the book to his friends and business partners Adam Kornfield and Scott Robertson.

Cofone’s immediate prototype proved to his partners that he was serious. “It told Adam and Scott we’re actually doing this,” he says. “I feel like if I didn’t do that book on that day, none of this would be here.” The team spent the following weeks amid the shelves of bookstores, art suppliers, fabric shops and paper retailers, all the while using and assessing Cofone’s homemade prototype. The Cheerios-clad notebook employed a case/signature binding technique so it could lie flat. The cardboard cereal box was covered in a durable gray cloth that would be comfortable and stay clean, and the book was sized to fit easily in one hand.

Though the Baron Fig is largely a product of Cofone’s own preferences, he also wanted to make sure his invention worked for all kinds of people, not just himself. “I wanted to make a book that’s about what people are doing with the product, acknowledging idea generation across all different fields,” he says. So in between the shopping trips to material stores and detailed analyses of his first prototype, Cofone sent a six-sentence email to hundreds of architects, designers, illustrators and writers around the world. It asked a simple question: What do you like in a sketchbook or notebook?

To Cofone’s surprise, paragraphs of thoughts flooded his inbox — more than 80 percent of the creators responded. Together, the crowdsourcing results and their extensive testing of the homemade prototype gave the team their to-do list. Keep: ability to lie flat and a hard cover wrapped in a durable gray cloth. Changes to make: book a bit smaller, pages thicker and paper hue a bit more off-white. Cofone was meticulous about every tiny decision; he wanted a flawless notebook. “I don’t use hammers, nails or wrenches. I use a notebook. And for a tool I spend so much time using every day, I want to treasure it and have it be perfect,” he says.

Finally, in June, with his materials chosen and to-do list in hand, Cofone met with Judith Ivry, a professional bookbinder in Manhattan. “Joey came to me with a whole bunch of notebooks, and detailed the issues he had with each one,” she says. “He clearly had a healthy appetite for filling notebooks.” Yet to Ivry, it seemed a little crazy to quit your day job to try to improve a tool that hasn’t changed much since the time of Leonardo da Vinci. But, infused by Cofone’s passion, she tossed her initial skepticism aside and completed the job. By the following week, Cofone picked up the first real Baron Fig. “It was perfect,” he remembers. “She got everything right.” By early September, the Kickstarter was launched.

Now that manufacturing is underway, the Baron Fig is about to make its first appearance in the hands of those who helped design it. The big question is: Will Cofone’s obsession take off? His partners clearly think so. “Joey cares about the little things and works really hard to think them through,” Robertson says. “That type of thinking is where really great products come from.” Kornfield is equally optimistic: “I was just upset it took Joey so long for us to do it.”

Ryan Wilke, one of Cofone’s last design clients before he moved to pursue Baron Fig full time, thinks the notebook is too important to ever go out of style. “I work in finance, where everything is digital now, but everyone still needs a notebook at some point during the day,” he says. He’s looked at the product and believes it really is better than other notebooks he’s used and is looking forward to getting his hands on one.

Yet Cofone knows his leap of faith isn’t revolutionary. He simply wants to create a product that’s better than what already exists. “I’m not going to convince you to be excited about a notebook if it’s not your thing. My goal is to make something awesome that satisfies me and the people who generate ideas and bring them to life.”

He’ll know he succeeded if Baron Fig users feel like the notebook has disappeared in their palm — focusing solely on the ideas they’re pouring into the book. “It’s kind of funny to think of a notebook ‘working,’ but really there are a lot of subtle factors that go into making a book work,” says Ivry, the bookbinder. “You don’t want to have to fight the pages to stay open, and you want it to feel nice.”

Cofone values simplicity and elegance of design: it’s no surprise his favorite ice cream is vanilla, with no toppings. The dessert is simple; it does its job without unnecessary extras. Cofone has boiled the notebook down to its essentials and worked to perfect each one in order to “get out of people’s way,” he says. It’s a blank slate that puts the spotlight on its users, urging them to create something the world has never seen, just like the Baron Fig itself.

Thank you for the feature—glad you enjoyed exploring our journey! I love everything about the article, save for the subtitle “One man’s obsessive quest to optimize the everyday notebook.” This just isn’t true—it’s a quest that’s involved many.

Unfortunately, the subtitle paints the struggle as being singularly owned by me, when in fact Baron Fig is where it is because of the toils of many. Our co-founder Adam Kornfield sits next to me every day and works just as hard as I do. We’ve been on this journey side-by-side, with dedicated collaborators constantly oscillating in the wings.

The company’s very foundation is built on the celebration of ideas and collaboration. Aside from the subtitle—great post.