With 24 years of business under his belt, Maury Rubin of The City Bakery thinks New York City should take a few cues from the West Coast in grading its restaurants 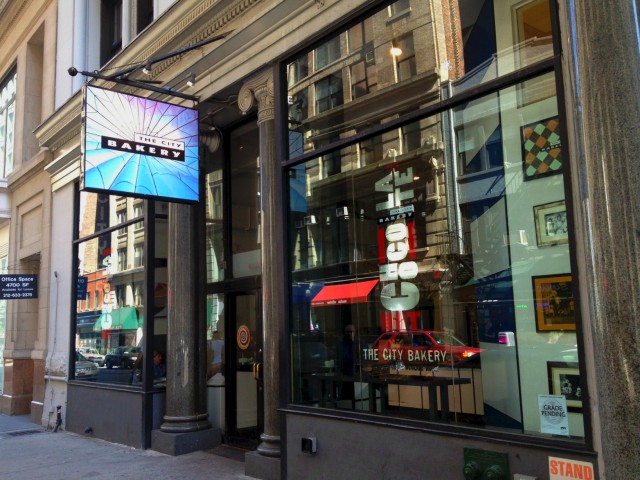 The City Bakery near Union Square in Manhattan, with "Grade Pending" sign in the bottom right corner. A restaurant may post this sign instead of a "C" grade if the owner plans to contest their most recent health inspection. [Image credit: Amy Nordrum]

What the BLEEP is candy corn?

Maury Rubin, founder and owner of The City Bakery at 3 W 18th Street in Manhattan, first opened his doors 24 years ago and is well-known around the Union Square neighborhood for creating a hot chocolate so rich, you can almost chew it. Rubin still walks to work in the mornings and loves to shop at the outdoor Greenmarket for ingredients. Last December, health inspectors from New York City’s Department of Health and Mental Hygiene served his bakery a “C” – the most damning letter grade on the rubric – for the second time in three years.Inspectors found mice, roaches and flies on the premises and cited employees for not holding food at proper temperatures. Recently, Rubin sat down with me at a small table overlooking his spacious café, and explained why he thinks that “C” has more to say about the NYC Department of Health than his bakery.

Can you give me a sense of the scale of your operations?

There’s an average of 35 people who are working here at any moment and a minimum of 1,200 to nearly 3,000 people come in here every day. It’s a busy place.

How have the city’s health regulations changed over all the years you’ve been in business?

There is a very clear point in time where everything that a food business in New York had to deal with became more burdensome. Roughly 12 to 14 years ago, the city had budget issues and discovered that very aggressive policing of the food business by the Health Department was an awesome new revenue stream. And I think that’s the no-turning-back moment.

What does that mean for The City Bakery?

It means we’re under the boot of government that’s pressing down hard because it knows that when it presses down hard, it makes money.

In the big picture of running your business, how much do you worry about the health inspections?

It’s in the front of my mind, 365 days a year. It’s like waiting to have an anvil dropped from the sky to crush you. Here’s why I’m comfortable to a certain point to be so critical of it — we have an average of nearly 2,000 customers a day. We have served a minimum of 1,000 people every day for at least 15 years from the time that City Bakery first started growing up and became a pretty busy place. So, a quick calculation (Rubin jots down figures on a scrap of paper) — 1,000 people a day for the last 15 years — 5.5 million meals served. Our food sanitation record is textbook. The proof is in reality versus the inspection system — we wouldn’t be around and we wouldn’t be thriving if we didn’t care about this. But at the end of the day, that’s a separate reality from the inspection process for the Department of Health and that’s why it’s so frustrating. That’s why I’m sorry to have to say it’s disreputable to the city.

How do you think they miss the mark?

We merchandize and display food in an open-air environment. That’s incredibly problematic purely from the basic approach and guidelines of a Health Department inspection. 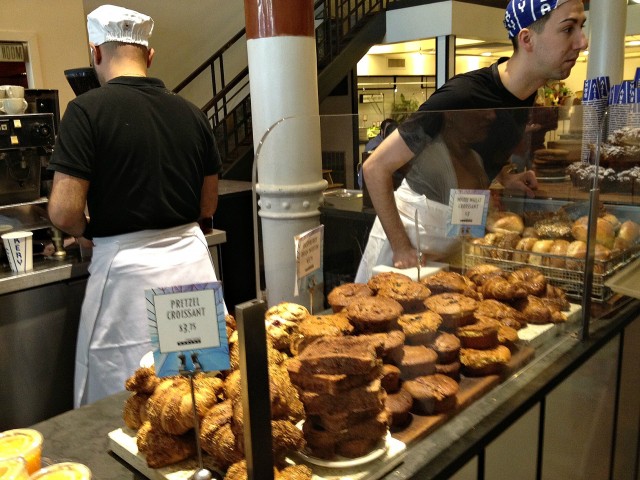 We don’t have display cases — we have countertop displays with sneeze guards. It just so happens that the sneeze guards have no criteria in the considerable volume of material that the Health Department provides. So the inspector comes and says, “Your sneeze guards are too low,” and you say, “No inspector has ever said that before.” And it’s very classic — they shrug and they say, “Ok, but I’m telling you they’re too low.” And you say, “Can you show me the criteria of what it needs to be?” And they’ll shrug their shoulders again and it’s a fine.

Is there a better system out there?

I operated a food business in Los Angeles, Calif. for three and a half years. When I first went to LA, and you see these big letters on the front windows of restaurants and bakeries and food markets, that was a very intimidating thought. And what I learned was the LA Department of Health is in fact, a resource toward protecting public health and welfare. When you’re in LA as a food business, you plug into the Department of Health as a support system.

You cannot put one nail into a piece of wood in LA until the Department of Health has approved your plans. Starting there, you’re working together. And then one day, three months or six months later, you open up and the Department of Health walks in the door and you’ve already been working together since literally those plans were committed to paper. You’re doing something jointly. It’s a fabulous system.

New York City, when it converted to the letter grade system, kept waving the banner of LA as its go-to example, but it literally took only one thing from LA — the letter grades. It took no methodology, it took none of the approach. It just took the scoring system. When the LA Department of Health walks into your restaurant, they are expecting it to be faithful to the plans that they’ve approved. What New York City is counting on is the opportunity to see things for the first time and say, “Oh no — that’s wrong.” It’s a gotcha system. It’s more adversarial, and it has nothing to do with a very simple, fabulous approach in LA of, “We’re in this together.”

My interest of a safe food supply has everything to do with the welfare of my customers and my business before I even start thinking about the New York City Department of Health. I think most reasonable people would agree on the reasonable view of an operation’s cleanliness, presentation and sanitation. I think that food inspectors walk into City Bakery and they see a big, clean, presentable place. I think this shifts their criteria to where they’re in our sub-basement looking — hoping — for a sink with a washer that’s loose. So 40 feet underground New York, you have a 10-inch hand sink that has a small leak — you’re going to pay about $1,200 for that leak. And that leak is going to be considered a critical violation.

Where one would hope that reason comes to bear in that moment — reason does not exist within the New York City Department of Health. It just doesn’t.

After this interview, the New York City Department of Health and Mental Hygiene announced new grading rules with fixed penalties that they say will reduce the cost of fees slapped on restaurants as a result of inspections by 25 percent, and allow for owners like Rubin to request a free and ungraded inspection to find violations that could be fixed before their next official grade goes on the books. Meanwhile, Rubin awaits his next inspection while running The City Bakery and building a new chain of eight eco-conscious NYC bakeries called Birdbath Neighborhood Green Bakery. All Birdbath locations that have been graded thus far have earned an “A” in their most recent inspections.