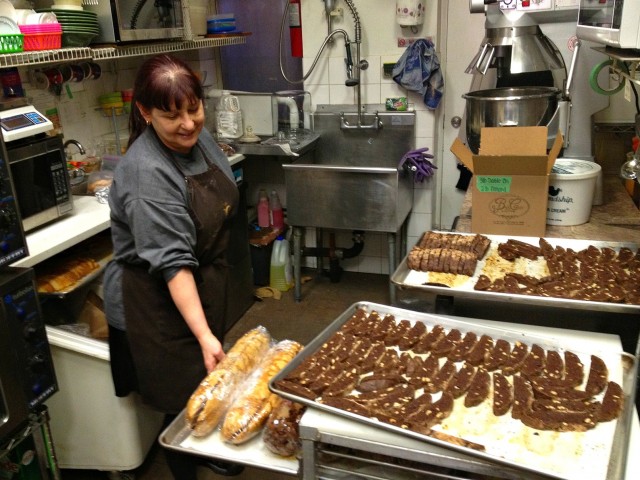 The owner, head baker and biscotti-maker at Bis.Co.Latte in Hell’s Kitchen, Manhattan is having a bad day. There are no customers in her cheerfully-decorated midtown cafe, and that means she’s losing money by the minute. “It’s very disheartening on days like today,” Holly Olchak DeSantis, 55, says. But when a customer finally sits down to sip coffee at the next table over, she mutters under her breath that he is in violation of the cafe’s strict “do not sit down at a table with a paper cup” rule, clearly posted on signs to give priority to customers who are ordering a full meal at one of a half dozen tables in the cramped 600-square-foot space.

Breaking that rule is merely one in a long list of Holly’s frustrations with the 100 or so customers who brave her doors on a daily basis, from purchasing “just” a cup of coffee to daring to pay for that cup with a credit card, costing her processing fees that eat into her profits. She regularly kicks patrons out for talking on cell phones too loudly or for working on laptops too long. Yelp reviewers resent her for it while regular customers wait in amusement for her fury to descend on unwitting newcomers.

“The majority of our customers are incredibly wonderful and appreciate what we do, but it only takes one person a day to send me into a tizzy,” Holly says beneath her unevenly matted bangs. The Brooklyn native is dressed in dark from head to toe, and sternly unadorned except for a wedding ring and tiny gold hoops in her ears. Holly’s father manufactured stainless steel kitchen appliances for a living, including ovens like the one she uses today to bake biscotti. Her mother was a housewife, but Holly says her own livelihood “has nothing to do with that.”

At first glance, Bis.Co.Latte seems like a warm respite from the sharp edges of New York’s city streets. Holly studied art at the School of Visual Arts in Manhattan, and her eccentric style comes through in the cafe’s decor. A neon pink light traces a quirky curve across the ceiling, while bright green and orange walls display original paintings by neighborhood artists. Tea service comes in three patterned pots that fit together on a plate in perfect geometric harmony. A bookshelf stocked with magazines invites customers to linger, though Holly will shoo any who take that invitation too literally.

“Holly has a really great aesthetic,” says Alicen Hubert, a barista who has served at the cafe for four years. “We’ve tried to create a more restaurant feel than other coffee shops — a different vibe.”

Holly’s menu is just as distinctive, listing hot chocolate by the bowl and a daily rotation of Tuscan-inspired homemade soups and risottos. At breakfast, Illy coffee is always a hit and about a third of customers leave with a cup of slow-cooked steel cut oatmeal. And then, of course — there’s the biscotti, in big glass jars on tall white shelves behind the counter. Sliced thinner than you’ll see elsewhere, you could stack these hardened slivers 20 high before they’d topple. Holly’s recipes still pack a sweet punch into each airy bite, baked in traditional flavors like hazelnut, chocolate walnut or almond but also in novelties like cotton candy, rose and green tea with spearmint.

“If you see her apartment, she has thousands of cookbooks,” Hubert says. “It’s been an independent study in flavors.”

The classic dry crunch of biscotti comes from baking it twice — the origin of the word “biscotti” is the Latin word “biscoctus“ which means “twice-baked.” Back in the kitchen, Holly begins this two-day process each morning. First, she consults the three-ring binder that holds all of her recipes. The book has grown from just 20 recipes on opening day to over 100, with lemon poppy seed on page one. She mixes the ingredients up into one of two basic types of dough — a traditional sticky dough with lots of egg, or one that is easier to mold that she likens to cookie dough. The flavors she blends into the dough depend on the season, customer recommendations or her own whims. “My son loves Oreos so I created a cookies and cream one that had Oreos in it,” she says. Once the dough is mixed, half of it might be frozen for future use, while the other half goes straight into the oven at 350 degrees Fahrenheit. After 25 minutes, she takes the hardened log out to let it cool, and then cuts it into the strips we recognize as biscotti. The next morning, she puts those strips back into the oven for another 20 minutes to dry out. She cools them on a rack and then transfers them to cellophane bags to mail out to internet customers, or to clear glass jars for countertop display. 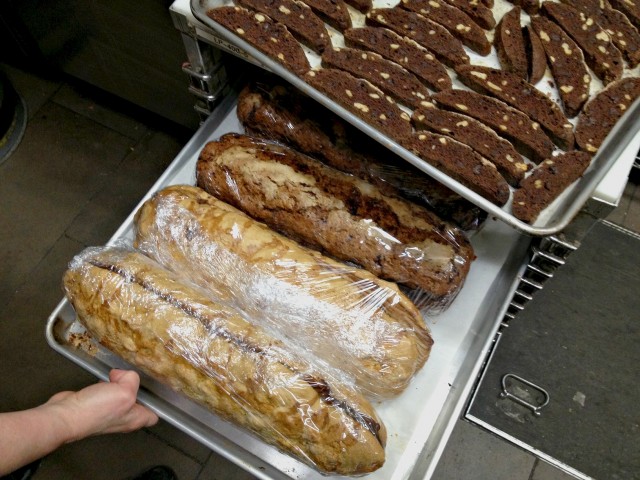 The biscotti logs on the bottom tray have been baked once, while the chocolate pieces on top have just been pulled from the oven for the second time. [Image credit: Amy Nordrum]

Holly has been baking biscotti ever since she started a catering company in her mid-20s called Party Girls, throwing events for celebrities and musicians on the east and west coasts. In 2004, she and her husband Antone, also 55, moved back home to New York City from Los Angeles for his job in the music business. Holly decided she wanted to stop catering and stay closer to home because their son, Julian, was 4 years old. So in 2007, Holly and Antone invested their personal savings of $200,000 to rent and renovate the space at 667 10th Avenue. It was just around the corner from their home, and on a strip of New York City that she felt was filling in nicely with families and professionals. That summer, Bis.Co.Latte opened for business.

Press coverage was generous in the cafe’s earliest days — outlets from the New York Times, to New York magazine and The Wall Street Journal raved about Holly’s biscotti, calling it “superb,” “irresistible” and “the city’s primo biscotti.” One of those reviews led the owners of the Manhattan-based coffee chain Joe to start placing orders for their chain of eight coffee shops. “[Holly and Antone] brought us samples and they were the best biscotti we had ever had,” says Gabrielle Rubinstein, a part-owner of Joe. “Customers love them. They say they are the perfect accompaniment to coffee.”

So did Holly seem happy in those first few months? “No,” Antone says. “I think the stress was beginning. I think it started to overwhelm her very quickly.” Despite the great press, she still wasn’t selling enough biscotti at $1.25 per piece to keep the business running, much less see any return on their investment. Even after expanding into internet sales and wholesale orders, people simply didn’t buy enough biscotti. So within six months, Holly had added soups and risottos to the menu. She could charge more for these entrees and keep the business afloat, but she created much more work for herself in the process.

Holly had opened the cafe believing “it would be an easier way of life,” but quickly found the opposite to be true. “You’re on sort of a treadmill. The work is never done and you always have to show up again.”

That day-to-day toil has Holly on a short fuse, and she wonders how much longer she can keep the place afloat. Her son is now 14, and Holly is pulling 16-hour days. “I make everything here — there’s nothing in the entire store that I haven’t made,” she says. “You create your own monster, you know?”

Nate Weida, 34, is soft-spoken composer who lives nearby on 45th Street and is Bis.Co.Latte’s “top customer” according to Antone. Weida is a big fan of Holly’s frittata and muffins and has been dropping in since the cafe’s opening week. “[Holly] thinks [Bis.Co.Latte] would fall apart if she leaves it for a second,” he says. “It may fall apart if she leaves it for two seconds, but one second…”

She does have help, but Holly would rather not count on it, even when that helps comes from her own husband. In 2010, Antone lost his job in sales and marketing at Universal Music Group and joined Holly at the cafe as delivery-man, chief marketer and music connoisseur, designing custom playlists for the sound system. The couple has depended solely on the cafe ever since. “It wasn’t supposed to be the only business,” Holly says. “The income that we make here has to support our family, and it does not really support a family.”

“Rent is too high to keep it going,” Antone agrees. For now, they stay open on skinny profits, presumably because closing the shop would result in a devastating loss on their investment.

To Weida, watching Antone and Holly figure this out together is part of Bis.Co.Latte’s harsh appeal. “They’re funny, they’re a bit volatile and that’s what’s exciting about being here,” he says. Whenever Holly asks Weida to change tables or move along, she brings a free biscotti or another reward to thank him for his willingness to accommodate her demands. Weida has hung around long enough to meet his future wife at Bis.Co.Latte — Alicen Hubert, the barista. They’re getting married on June 7, and Holly is baking their cake. “We’re very very grateful for it,” Weida says, even though her constant nagging is “stressing us out more than anybody.”

Nevertheless, Weida calls Holly “one of my closest friends” and insists she has a big heart, even if it’s a bit hard to get at. “She’s so loving and so generous but she’s such a grumbler,” says Weida. “You wonder where the enjoyment fits in, except for the fact that she creates such beautiful things. As an artist, I understand that — the need to do something that tortures you and punishes you all the time.”