If you can’t beat ‘em, find a buddy and follow him 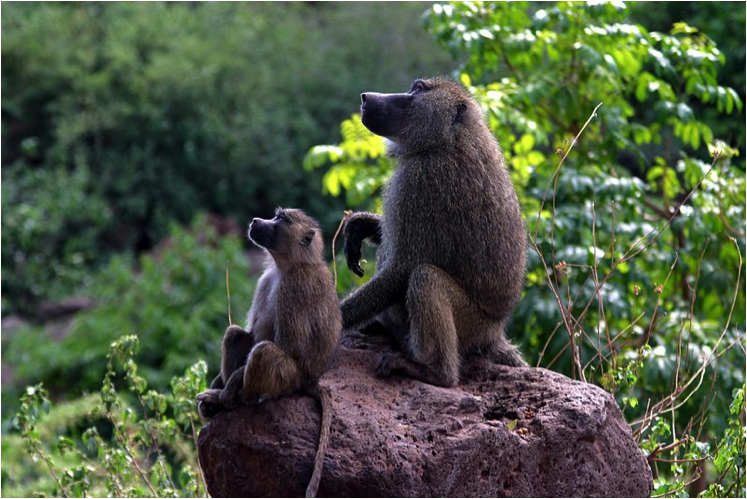 Cutting in line. Jumping the queue. Cheating. For everyone that follows the established social code, there’s someone else getting sneaky and skipping the steps. After all, when you’re dealt the weak hand, you’ve got to play dirty.

This phenomenon becomes quite messy when the line in which you wait dictates when you mate — such is the olive baboon hierarchy. Baboon hierarchy says that alpha males, those ranked in dominance as first, second, third, and so on, mate before all other males in the group. Moreover these leading males get to mate when females are most fertile, significantly increasing the male’s chance of fathering offspring. From the female’s perspective, she too desires the highest-ranked male. She wants his healthy, dominant genes to be passed on to the babies that she’ll soon carry.

But there’s a kink in the mating order. Low-ranking male baboons want to mate with the fertile females, too, and they’re not about to wait their turn. Ergo, they’ve adopted a surprisingly successful strategy. “Following” behavior occurs, as described in a recent study in the International Journal of Primatology, when two bottom-of-the-queue males form a coalition — gaining in number what they lack in strength — and track closely behind an alpha and his mate. These followers coordinate and communicate, directing lip smacks and head flags towards the taken female. “Pointing with their heads,” says lead author Lisa Danish of Rutgers University, “followers organize mate takeovers.”

Imagine a high profile couple on a pre-coital stroll through the Kenyan woodland. It’s a full moon and things are going well. Soon, a scrawny and scrappy male duo, the followers, gallops over. One of the misfits distracts with aggression — grunting, lunging, and molar grinding at the alpha male. “You can hear their teeth making this nail on chalkboard kind of awful sound,” says Danish. As the alpha tries to rid itself of the low-ranked annoyance and get back to reproductive business, the second follower seizes its mate. A snappy six seconds later, a low ranker has successfully stolen and mated with a fertile female.

In fact, says Danish, two out of every three times a dominant male lost his mating partner, it was because one of these followers had snatched her. Without addressing this sly tactic, she adds, “we’re not really understanding the olive baboon mating system.”

But it’s not the first time scientists have witnessed this behavior. Following was first referenced in baboons in 1965 and anthropologist Clifford Jolly points out that the behavior has since been well described within the species, among other animals. “It seems to me [following] is just what happens when a single male, or a coalition, is attracted to a [fertile] female, but they’re not able to take over immediately,” he says. “I think it will occur in any species where females advertise when they are [fertile].”

So in some species, following might be an effective strategy for individuals who are low on society’s totem pole. And perhaps the take-home is that to thrive and prosper, most creatures must adjust. They learn to work with what they’re given — even if this entails running off with another’s hard-earned success.