Preparing for the flood

On the southwestern side of Venezuela’s massive Lake Maracaibo, a natural phenomenon continues to mystify residents.

The Relámpago del Catatumbo (relámpago means lightning, Catatumbo is a nearby river) is a lightning storm that rages most nights for eight months of every year, and has been flashing for thousands of years. As many as 40,000 lightning bolts illuminate the sky every night at a rate of 18 to 60 bolts per minute. But this disturbance happens high in the troposphere, about three miles up, so the storm raging overhead is eerily silent when viewed from the ground. 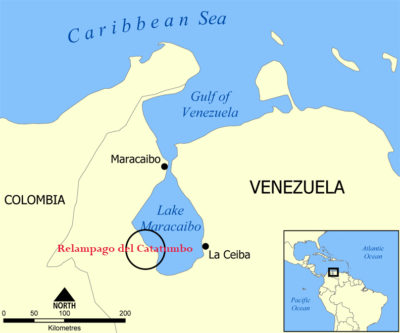 Historically, the lightning has helped sailors navigate the lake, and given away ships’ tactical positions in the Venezuelan War of Independence in 1823. According to a legend from the Wari, indigenous peoples of the region, the lightning is caused by millions of fireflies, which gather to pay tribute to their creators.

Today, scientists weigh in to explain the phenomenon, while locals still shut their blinds at night to keep out the light. But the Relámpago isn’t well understood. One theory suggests that hot methane rising from the gaseous bogs of the Catatumbo River mixes with cold, dry air coming down from the Andes Mountains to create perfect storm conditions. Another theory implicates kerogen, a mixture of organic compounds found in sedimentary rocks that is highly concentrated in the area due to underground petroleum fields. Kerogen leaking into the atmosphere may contribute to the buildup of methane that sparks storms, some scientists believe. Weather and humidity may also play a role, as the last time the Relámpago had a significant pause was in 2010 when a powerful El Niño caused massive droughts in much of the country. Others explain this pause by citing the rampant deforestation in the region, which may also affect it in unknown ways. 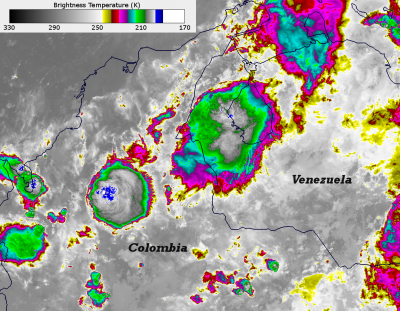 This infrared image shows the intense convection that occurs around Lake Maracaibo. The large central circle is the Relampago del Catatumbo. [Image courtesy of NOAA/CIRA VIIRS]

Even though it can’t yet be fully explained, the Relámpago del Catatumbo is unique, and holds several global records to prove it. It is the world’s top producer of ozone, which is created when atmospheric oxygen (O2) is forced apart by radiation, and the free oxygen molecules eventually join an existing pair to create ozone (O3). But this ozone isn’t the harmful, anthropogenic kind that settles at ground level; it’s the good ozone that populates the upper troposphere and lower stratosphere. Because the Relámpago produces so much, some environmentalists are calling for it to be named a UNESCO world heritage site. In January 2014, Venezuela entered the Guinness Book of World Records for the most lightning strikes per hour. As the climate warms and ecosystems change, scientists will continue to seek an explanation for this inimitable phenomenon once and for all. 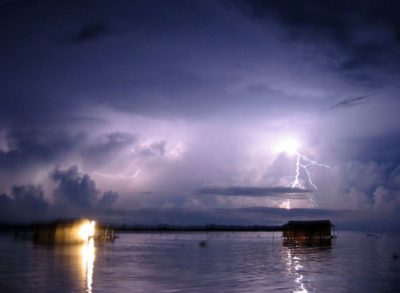 Lightning strikes are not rare here, but they don’t usually hit the ground below. RedAndr via Wikimedia Commons.

It seems imperative that the circumstances surrounding the Lightning be studied and understood. Governments should be throwing money at studies of the environment like this. Who will know or care that ozone production has fallen or stopped?. Ozone does a very important job in screening out UV B radiation, UV B being a threat to human health. There is so much disinformation around that any study showing anthropogenic related change to environmental systems is met with a barrage of lies and half truths. Science and facts should drive the debate not corporations whose only concern is more profits.