Scientists continue to debate whether experiments can show that our primate ancestors evolved fairness, or if cooperation is uniquely human 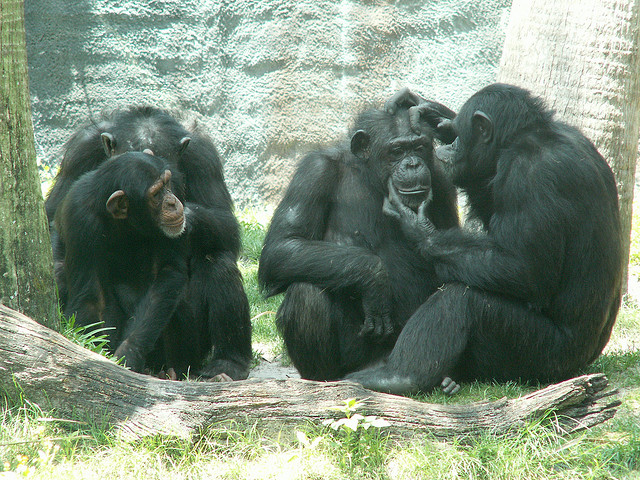 Chimps, our closest primate relatives, may appear to help one another, but scientists aren’t sure whether this is true cooperation or some other instinct. [Image Credit: Flickr user Dragon Photo]

An appetite for controversy

It’s a cold morning in New York’s Washington Square, but that doesn’t stop a group of elementary school children from bursting onto the playground. A lucky four make it to the swings first, while a late-comer in a red jacket must push his friend until she is done. When they finally trade places and he gets his turn, he laughs as he swooshes through the air.

Young children might bristle at having to patiently wait their turn, but they already know that this is only fair. After all, they’re human, and history shows that we have an undeniable affinity for cooperation. But are we wired to be that way, or do we learn fairness as we grow up? Many scientists wonder the same thing.

There are two schools of thought, and no consensus. Some scientists maintain that human fairness can be traced back to our primate ancestors. They think that primates evolved to cooperate in order to increase their chances for survival, and that we inherited this trait.

Others argue that the human inclination to be kind to each other is unique. Primates, these scientists say, may not cooperate at all, and even the best experiments can’t determine why they act the way they do. If our closest animal ancestors don’t exhibit cooperation, we likely developed it on our own through genetic adaptations or cultural pressures.

The core of this debate is how to test these alternative ideas about the roots of fairness. If scientists can prove that our closest primate ancestors cooperate, it would appear that our own fairness had animal roots. However, it’s not such a simple process: Scientists aren’t sure what the best experimental design is to compare human and animal behavior. Even when they agree about the right test, researchers still argue over how to interpret the results. What looks like fairness could actually be some other animal behavior, and even if both primates and humans cooperate similarly, scientists can’t really prove if the trait was passed down through evolution.

“I absolutely think we’ve evolved to be fair,” said Sarah Brosnan, a cognitive psychologist from Georgia State University who has found experimental evidence of cooperation in primates. But Keith Jensen, a psychologist at the University of Manchester in England, has conducted experiments that yield the exact opposite results. We may think that they are being fair, he said, when there is some other, more selfish explanation.

Brosnan and her colleague Frans de Waal, director of the Living Links Center at Emory University in Georgia, argue that primates have a distinct sense of fairness. In one experiment, the pair tested how brown capuchin monkeys reacted when they were treated unfairly. They gave pairs of monkeys different rewards for exchanging a token with an experimenter. Some would get grapes, which the monkeys liked best, and others would get cucumbers. The team found that when one member of the pair saw the other earning a better reward, they protested, either by refusing to participate in further trials or rejecting the worse reward.

Brosnan concludes that this experiment supports other research showing that some primates have evolved to cooperate for survival. If these animals don’t tolerate unfair behavior, it may show they have an inclination for cooperation. In a cooperative relationship where animals work together to achieve more than they could alone, it’s in their best interest to share rewards equally for the sake of their partnership, she says.

Some evidence suggests that cooperative behavior in humans and other animals might be linked with raising their young communally. A team led by Judith Burkart, an anthropologist from the University of Zurich in Switzerland, conducted an experiment with 15 species of primates, including tamarins, lemurs and children. The researchers tested each species with a device that allowed them to give food to a peer, but not to themselves. Species that cooperatively breed — that is, care for their offspring in a group setting — were more likely to selflessly give food to their partners. Human children were the most cooperative. According to Burkart, this experiment shows that the origins of human cooperation “is not a conundrum but something that evolves quite predictably.”

Despite the weight of this data, other scientists conclude that these experiments don’t really demonstrate that non-human animals behave cooperatively. Even if primates do cooperate, these scientists argue that human fairness is unique in its complexity, and that culture shapes the way we treat one another.

Michael Tomasello, a developmental psychologist at the Max Planck Institute for Evolutionary Anthropology in Leipzig, Germany, is a leading critic of such studies. Tomasello argues that chimps, our closest primate relative, aren’t fair in the same way that we are. And while he agrees that children may be born with altruistic tendencies, he cites the key role of culture in reinforcing the sense of fairness.

“I think the divide between humans and chimps is even stronger than Tomasello suggests,” said Jensen, who obtained his PhD with Tomasello. When chimps perform different tasks together in experiments, Jensen said, they may just be interested in figuring out a puzzle.

Jensen and his colleagues tested whether chimps also dislike unfair situations, like the monkeys in Brosnan and de Waal’s experiment. They placed chimps in two separate cages where they could reach food on an outside collapsable table. One chimp could pull a rope to bring the food closer to him, and the other could pull a rope to collapse the table and prevent either from getting food. When one chimp stole food from the other, scientists observed that the second became angry and almost always collapsed the table; this was the control scenario. Researchers also took away the food from both chimps, in order to see the second chimps’ reaction to losing the food when no one would get it. Then, to test the chimps’ reaction to unfairness, and not just anger or frustration, researchers reallocated the food from the first to the second chimp. The team found in the loss and the unfair scenarios, chimps collapsed the table at the same rate. The experiment showed that the chimps weren’t reacting to the unfair situation, Jensen said; they were just angry when they lost their food.

Yet similar experiments have led to conflicting results. For example, both sides of the fairness debate have used the so-called ultimatum game to test their hypotheses. In this game, two individuals must split a set amount of goods, such as money or snacks; one can propose how to share them, and the second either accepts the offer, or rejects it and neither receive the reward.

Jensen and his colleagues adapted the ultimatum game for chimps and children. The proposer could offer 80 percent, 50 percent, 20 percent or none of the food available. Chimp proposers tended to offer only 20 percent, keeping the majority for themselves, but the responding chimps almost always accepted any non-zero offer. Children, however, often rejected unfair proposals. The chimps weren’t that concerned about fairness, Jensen said. “They were focused on their own personal gain.”

Yet these results contradict Brosnan and de Waal’s version of the game. In their experiments, chimps and children could chose between two tokens to give to a partner. Each token represented a certain amount of food. The first subject gave a token to a second, and the second could present the token to a researcher for a reward. If he did so, the team considered he had accepted the offer. In situations where the responder needed to accept the offer for both to receive the reward, both chimp and children proposers offered the equitable token, and the responder usually accepted. When the responder could not reject the offer, the proposers tended to be more selfish. The team interpreted these two results as evidence of deliberate cooperation and fairness.

The contrasting experiments and results demonstrate why the debate has yet to be resolved. Each team thinks that its own version of the ultimatum game paints a clear picture of how fairness evolved in humans. Jensen argues that in Brosnan and de Waal’s experiment, the chimps were interacting too much with the researchers and could have been influenced to behave in human-like ways. Brosnan thinks that the initial exchange is enough for chimps to interact with one another, and argues that the important part of the game is the fact that both chimps were offering an equal reward. She hypothesizes that in Jensen’s experiment, the chimps may not have understood what was happening, and therefore were not behaving unfairly.

Until scientists can figure out what’s going on in animals’ heads, it’s impossible to say where human fairness comes from and whether or not we are the only primate species that has it. The real debate, it seems, is over how to conduct this kind of research. And until researchers can design experiments that they all agree about, the debate will likely go on.

Back in New York, the children at Washington Square aren’t preoccupied with this debate. For now, fairness is just another rule. Wherever the behavior came from, they know they have to wait their turn until they can ride the swing or use the slide.