The life of a bubble 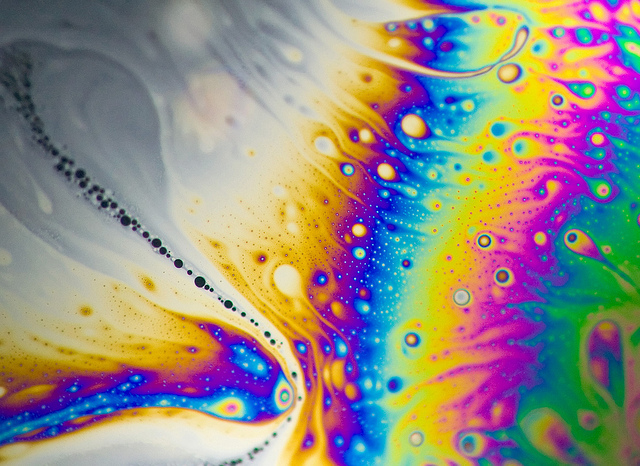 Bands of iridescent color make the surface of a soap bubble look like something from outer space. [Image Credit: Flickr user Umberto Salvagnin]

From bath time to birthday parties, bubbles bring joy to almost any occasion. The short-lived, soapy spheres mystify both young and old with their rainbow-hued swirls. Kids play with them for hours, gleefully chasing them as they float out of reach, or competing to blow the largest bubble (the trick is to inflate the bubble as slowly as you can). Bubble blowing may be one of life’s simplest pleasures, but the science behind them can get complex. When you blow a bubble, you’re seeing physics at work.

It all starts with soap molecules. Each molecule resembles a long worm: Many hydrogen and carbon atoms make up its body, with a head of oxygen and sodium. The hydrocarbon tail of the worm is hydrophobic, or water-fearing, so it flees toward grease and holds onto it for dear life. The water-loving (or hydrophilic) head of the worm pulls the grease free as it clings to clean water. This structure allows soap to both clean up filth and spawn bubbles.

The hydrophobic ends of the soap molecules refuse to mix with the water. A bubble is born when two layers of soap molecules trap a layer of water molecules between them, creating a molecular sandwich.

Soap makes the bubble. While water can have bubbles blown into it — think of blowing bubbles into a glass of water with a straw — they disappear as soon as whatever’s making the bubbles stops. These purely water bubbles collapse rapidly because their surface tension, the force holding its molecules together, is too strong. If you fill a glass with water, the molecules on the top will stick extra tightly to the ones below it, tightly enough to support a floating paperclip. When you blow bubbles made of only water, this stickiness causes the structure to immediately collapse in its eagerness to be surrounded by its fellow H­2O molecules.

When you add soap into the mix, the water-loving heads of the molecular soap worms attract the water molecules, which weakens the water’s attraction to itself. Unlike water, bubble solution can stretch and hold shapes without instantly falling apart. This doesn’t mean the water isn’t important, however: The water trapped between the layers of soap is why bubbles are round. A sphere is the smallest possible shape the stretchy film could take, because it has the lowest surface tension.

Soap molecules also fortify the bubble against the outside world. Even if a pure-water bubble could form and float away like soap bubbles do, it wouldn’t last long: The thin layer of water would evaporate almost instantly. Luckily for soap-strengthened bubbles, the grease-loving tails of the soap molecules that make up the outer layer of the bubble shield the water from evaporating.

The trio of layers also makes the shimmery, rainbow colors of a bubble possible. You wouldn’t expect bright colors to emerge from a clear liquid, but the process of becoming a bubble spreads the solution extremely thin — we’re talking nanoscale thin, even thinner even than one-hundredth of a human hair. This is the same size as the wavelengths of the different colors that make up visible light. When light rays strike a bubble, some reflect off the exterior soapy layer, while others pass through to the layers beneath. The light that bounces off the bottom layer has to travel farther than the light that bounces off the top.

When those distances are on the nanoscale, those two bouncing light beams get slightly out of sync, just enough for the beams to cancel parts of themselves out in a process called interference. This interference gives the bubble its iridescent colors.

You can see how the shimmering colors change depending on the thickness of the bubble. All you need to do is get a large bubble wand, dip it in bubble solution and hold it vertically. The bubble-to-be will be thicker at the bottom due to gravity. As the solution settles in the loop, bands of color will emerge. The thicker parts of the bubble are more subdued greens and pinks, while the thinner parts are bright yellows and blues. The thinnest part of a bubble is the weirdest part: It’s so incredibly thin that no visible light escapes, so it appears completely clear.

Sadly for the bubble, reaching that level of thinness spells certain doom.

While bubbles floating in mid-air might seem to defy gravity, this downward force ultimately tears them down. Like a balloon, a bubble is a thin layer of stretchy film around a pocket of air. Unlike a balloon, the bubble is made of liquid. Gravity pulls the bubble’s molecules downwards, becoming thicker at the bottom than the top. When the top gets too thin, the water layer can evaporate, creating a tear that causes the air inside to rush out and the film to explode into a shower of water and soap specks. This takes place so fast that it looks like the bubble simply ceases to exist — with a satisfying POP!

Nice article. But this statement is off by a little bit:

“A sphere is the smallest possible shape the stretchy film could take, because it has the lowest surface tension.”

If they are made from the same soapy water solution, a bubble sphere or flat film or one with one of the dramatic angles taken by individual bubbles in a froth or cluster of bubbles will all have the same surface tension. But the sphere will have the lowest surface *area*. If there are no other forces acting to deter it (like surrounding bubbles or wind or air resistance) all bubbles would be spheres.

I tried to have a paper clip float in water but it sunk.

“A sphere is the smallest possible shape the stretchy film could take, because it has the lowest surface tension.”

That may be true, and what Tom Noddy says may be true also, but isn’t the shape due to air pressure?

What an amazing explanation!
THANKS FOR THIS