A man of letters and soil 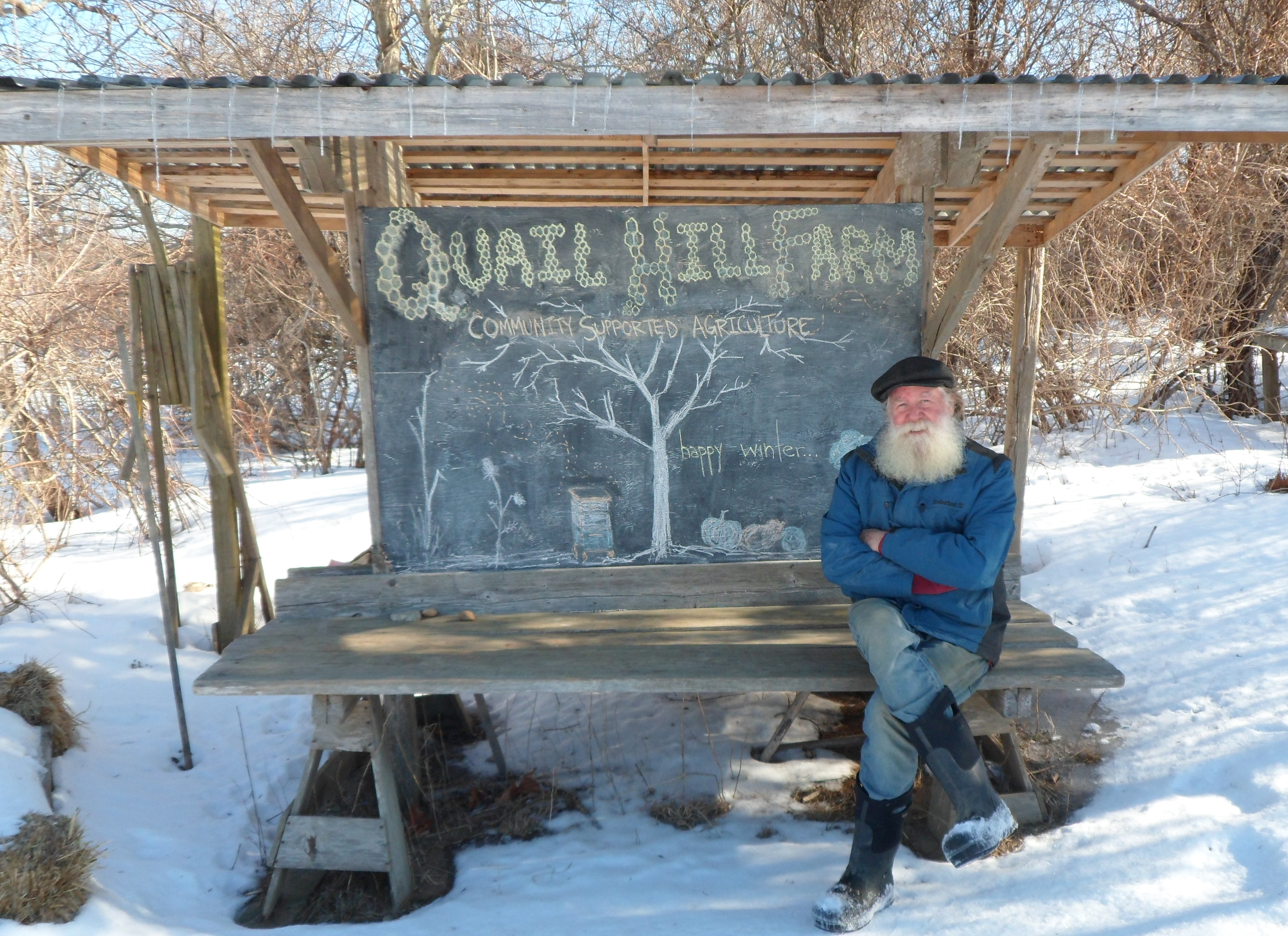 His cotton beard flutters in the February wind as poet and farmer Scott Chaskey wades through fresh, deep powder on his way to a chicken coop at the bottom of a gently sloping hill. It’s his daily trek on Quail Hill Farm. And it’s been a long winter in Amagansett, New York, near the tip of Long Island’s South Fork. Both Chaskey and his chickens are eager for a spring renewal at the 30-acre, community-supported farm he manages.

“This is really unusual to have snow stay on the ground for so long,” Chaskey said. “I’ve never seen it like this before. It’s just been so cold.” His voice is a calm cadence as he gestures toward the snowdrifts that have sealed shut the doors of the farm’s greenhouses. When he opens the coop, the chickens scurry out and Chaskey strides in. He plucks four fresh eggs from the roosts, the shells the same color as the fleshy-pink of white peaches. 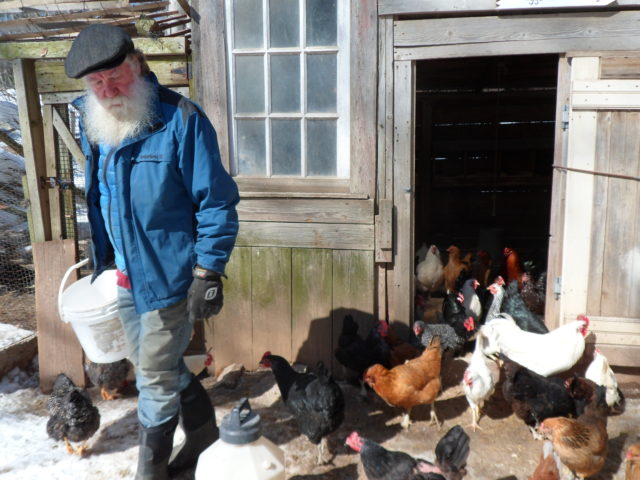 For most farm managers, winter is meant for ordering seeds, hiring new apprentices and planning for the upcoming year. But the 65-year-old Chaskey, director of Quail Hill Farm since 1990, also uses this time to write poetry and preach for a healthier and more locally controlled food system. With consumer demand for organically grown food on the rise, many farms are diving into the growing market. Chaskey is an articulate spokesman for small growers as they face increased competition from large-scale corporate farms that he asserts are often not as green as they claim.

To Chaskey, farming isn’t just about growing food. It is an expression of his values and aspirations. “It’s really about that interconnectedness,” he said. “I enjoy growing food and dealing with plants, but it also brings you closer to an understanding of our place.”

On his business card, Chaskey credits himself as a poet farmer, although shareholders and staff at Quail Hill Farm like to tack on genius to his title. Many co-workers look up to his practices and philosophies on land treatment. Bennett Konesni, a previous apprentice, went on to co-found Sylvester Manor Educational Farm on nearby Shelter Island. Konesni remembers how Chaskey once stopped working in the middle of the field and gathered farmers around a bright orange tassel flower called an Irish Poet. He then recited the poem “The Lake of Isle Innisfree” by Irishman William Butler Yeats. It is an ode to a small island off the western shores of Ireland — an escape to solitude and serenity.

“He is a man of letters and a man of soil,” Konesni said.

Born in 1950 in Tonawanda, New York, Chaskey grew up loving the outdoors. He attended Harper College, now Binghamton University, in upstate New York and began working on his poetry. While in England studying for a Master of Fine Arts in writing, he got a job as a gardener and “fell in love with working with the earth.” In 1981, Chaskey became an apprentice to a farmer in a small fishing village called Mousehole on the cliffs of Cornwall, England. But because the cliff sides were so steep, “it wasn’t farming as such, but more so kooky gardening,” he explained, smiling at the memory.

Aside from this, Chaskey didn’t have much formal training in agriculture before becoming the director of Quail Hill Farm. However, he was drawn to the idea of community agriculture and quickly learned from other organic farmers while on the job. Founded in 1988 by 10 families who wanted to harvest their own organic produce, Quail Hill Farm was one of the first community-supported agriculture farms, or CSAs, in the country, and one of the first to be built on protected land. The Peconic Land Trust owns all 30 acres of the farm, along with nearly 11,000 additional acres of prime Hamptons real estate. Today, more than 200 families are shareholders at the farm, part of a growing network of more than 6,000 CSAs across the nation, Chaskey said. 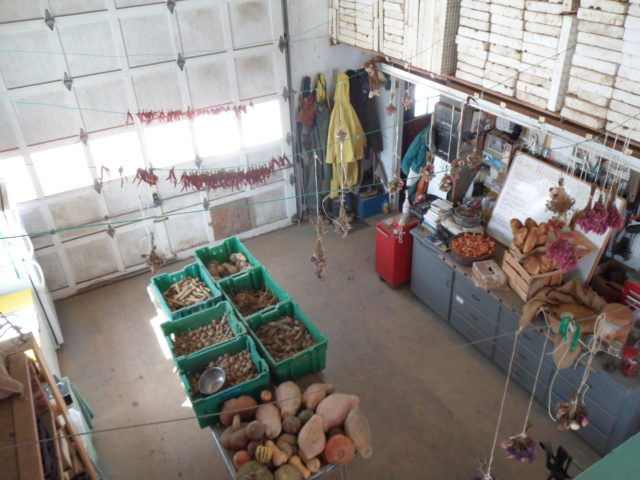 His work on the farm inspired two books: “This Common Ground: Seasons on an Organic Farm” in 2006 and “Seedtime: On the History, Husbandry, Politics and Promise of Seeds” in 2014. In both books, Chaskey questions how we appreciate and live with the land. Peter Forbes, a fellow farmer, writer and conservation activist, said that what separates Chaskey from many of his literary peers is the gentleness of his prose. Chaskey “brings lyricism into his books in a way where you feel the land,” Forbes said. “You understand the rhythms of the land through the rhythms of his writing.”

In “This Common Ground,” Chaskey writes that every time he sows a seed into Amagansett silt, “a melody is suggested by the wind, and resembles the invitation of a child.” In each harvest he cultivates a story of home, he writes. He concludes the book with one of his own poems because “poetry is ultimately about condensing” and “there is a lot that can be contained in few words,” Chaskey said.

Chaskey is a powerful speaker, too. His beady blue eyes smolder or sparkle depending on what aspect of food politics he’s chatting about, and his snowy beard and passion for land conservation are reminiscent of John Muir’s, a land preservationist known for his work in the Sierra Nevada mountains in California. His eloquence proved helpful when Chaskey was president of the Northeast Organic Farming Association of New York (NOFA-NY) for six years and when he represented small organic farms when the U. S. Department of Agriculture wrote its organic standards in 2000.

“I was hopeful that the word organic would be clarified by USDA ruling, but that did not happen,” Chaskey said. “I saw it go in the other direction.”

Quail Hill Farm chooses not to pay the $5,000 application fee and go through the detailed process of becoming organically certified by the USDA. Instead, they are certified by NOFA-NY’s Farmer’s Pledge, which endorses farms that establish community between family shareholders and nurture soil for future generations.

It is not uncommon for organic farms to opt out of participating in the federal certification program, according to USDA officials. Some growers skip certification because they’re already following organic practices and feel they don’t need the USDA’s seal of approval to market their crops, explained Miles McEvoy, deputy administrator of the USDA’s National Organic Program. “They may have direct sales to customers. Others may not want to do the paperwork or pay the fees. Others find that they think they are following organic practices, but they actually aren’t,” he added.

Chaskey’s former apprentice Konesni, who is now starting up a small farm in Belfast, Maine, applauds how Chaskey defended small farmers when he was NOFA-NY president and fought against big farming corporations that snuck around the rules. “They wanted to change the meaning of the word organic to make it easier to practice from that word,” Konesni said.

The USDA’s McEvoy said his agency has caught a few serious violations of the organic standard over the last five years, in some cases resulting in jail time and million dollar fees for the offenders. But according to Chaskey, there are still farms that still manage to reap the rewards of a USDA certified organic label while using conventional farming techniques. “There are some who cheat and charge more just to have that organic stamp on it. Suddenly, the organic industry is making millions of dollars,” he said.

Growing consumer demand for organics is going to keep boosting small farms like Quail Hill Farm, according to James Barber, New York State executive director of the USDA Farm Service Agency. But he said higher production costs will always limit large-scale organic farming. “I see a growing market for organic and local production, but I don’t see it becoming the only way it’s done,” Barber said. “You can have a successful organic farm on five acres, but maintaining production on a 500-acre farm is a challenge.”

Chaskey is undaunted. If a frozen February can yield to rebirth in April, so too can human attitudes. The key is for people to begin thinking of themselves as citizens of nature instead of its conquerors, he said, citing one of his favorite writers, Aldo Leopold. “It’s so difficult to change patterns that have been laid down over decades,” he said. “To me it’s obvious that we have to move towards a more sustainable system. We have it, but the change is slow.” 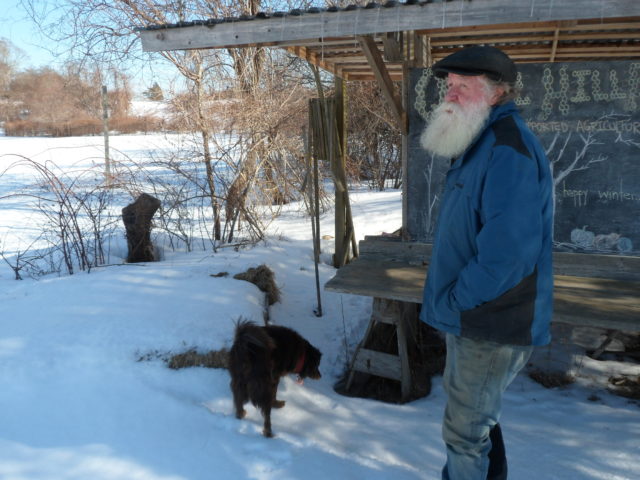