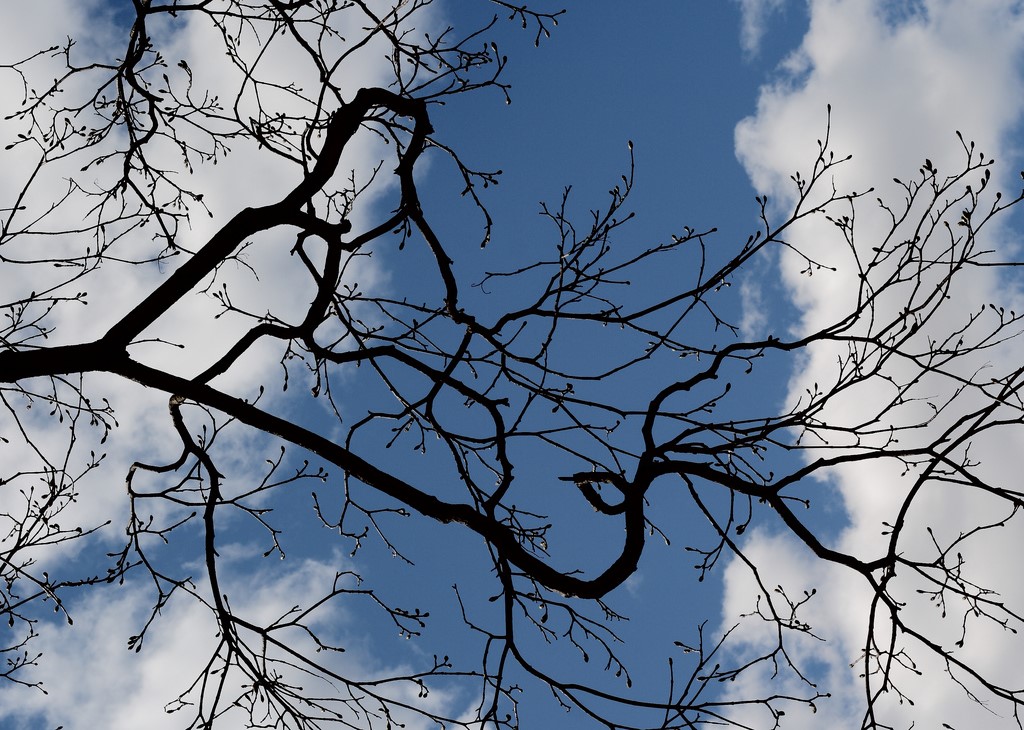 This network of branches is similar to what cardiologists see on the monitor during a coronary angiogram. [Image credit: Flickr User Sage Ross]

You lay flat on your back with your hands close to your sides as if preparing to zoom down a slick luge track.

You’ve been instructed to ‘relax, but try to keep stiff and don’t move.’ A soft glow from three computer monitors wash over one side of your face, but the image on the screen is positioned away from your line of view. Then, you begin to feel waves of heat rolling over you. It’s like you’re sloshing around in lukewarm bathwater. It starts at your groin and works its way toward your chest. The harsh fluorescent lights overhead dim and brighten ever so often, while large, chunky machinery hanging from above on a robotic arm rotates around you. The heat intensifies, and you can only think about how much you need to pee.

This is not a scene from an alien abduction movie, but from a coronary angiogram.

Angiography is a type of fluoroscopic X-ray, in which a camera continuously takes pictures to visualize blood flow. The short ‘X-ray movie,’ as many medical professionals call it, looks similar to the flickering black and white film in old silent movies. It allows doctors to see if there are any blocks throughout the network of veins or arteries that carry the blood to vital organs and limbs.

For cardiologists, coronary angiograms are windows into the heart. The procedure gave doctors the first clues to what a heart attack looked like and have helped them understand how the heart functions.

Coronary angiograms derive from cardiac catheterization — any surgical procedure that enters the heart. In the 1940s, Earl H. Wood studied the heart conditions of pilots during flight while inventing the first aviation G-suit. He spun his subjects in human-sized centrifuges to create the G-force that cause pilots to faint, and would measure heart pressure. Wood took the techniques from his research and developed the first versions of cardiac catheterization.

In the 1960s when the first coronary angiograms were completed, hospitals were filled with film projectors. “We would put the can of film into the projector and that’s how we would see it,” said cardiologist Dr. Martha Grogan, who sees about 30 of these procedures done per day at the Mayo Clinic at Saint Mary’s Campus in Rochester, Minnesota.

While the quality of the images doesn’t differ much from the first angiograms from the 1960s, today the movie is completely digital.

And in coronary angiograms, the heart is the star of the show.

Typically, blood cells and plasma aren’t visible in X-ray images, but during an angiogram, a special dye called contrast is injected into the bloodstream to distinguish the targeted arteries. The patient feels a small amount of pressure as a cardiologist inserts a plastic tube the size of an IV into one of three sites: the groin, upper thigh and more recently into the arm. This creates an entryway for a thinner, pliant tube, called a catheter, to worm through the canals of the bloodstream. The cardiologist extends and positions the opposite end of the long catheter backward into the aorta against the blood flow until it reaches the area of interest in the heart.

The colorless dye, containing iodine that the X-ray detects, is released in small drops. As it makes its way through the body like black ink dispersing through water, technicians follow its every move.

“As we inject the dye, we follow it as it goes through,” Grogan explained. “So it’s basically making a movie of the dye flowing through the heart.”

The slightest movement may distort the scans. Grogan warns her patients ahead of time that they may be strapped to a table and that they will have to hold their breath at specific moments to capture an accurate representation of the blood flow to the heart. The liquid dye injections cause the warm flowing sensation through the body. Injection dosages increase across the 20 minute long procedure, which causes intense heat flashes and the common urge to pee.

The heart is invisible on the monitor screen until the dye passes through the arteries, turning it into a network of roots that darken for a brief moment before vanishing back into the gray background. Dyes packed with more iodine earn darker, denser photos. Most patients tolerate iodinated dyes well, although some may undergo major anaphylactic shock if they are allergic to components of contrast dyes. The dye is later broken down in the kidneys and expelled from the body through urine.

A cardiologist and radiologist both look over the data. If they find part of a vessel is white when the dye passes through, it’s an indication that there is blockage. A narrow opening often looks like the pinched portion of two lined sausages. A clogged artery prevents proper blood flow and can lead to a heart attack. Detecting build-up of plaque in an artery early on through coronary angiograms can help start preventative measures, thanks to ever improving technology and techniques, such as opening up the pathway with balloons or stents.

While they aren’t the most comfortable procedures to have, coronary angiograms are useful — and even beautiful — imaging tools that enable doctors to diagnose many heart defects. The most uncomfortable and awkward picture you may ever have to pose for might save your life.

It’s enormous that you are getting thoughts from this article as well as from our dialogue made at this place.

It doesn’t matter if our internal condition is pictured in a uncomfortable way, only if we can get the ideal result and gain the information we want from the action. Besides the short movie shot in this way is really very beautiful.

No matter the procedure is comfortable or not.Saving the life is the key during the time. Therefore,even you can not imagine the uncomfortable things, you must try sometimes, can’t you?

Wow, I am so encouraged by this webitse!I am 55 yrs old. On Sept. 9, 2011 I had a weird back/and chest pain. After an angiogram I was diagnosed with SCAD, my RCA had a dissection in the smaller vessel so couldn’t be stinted.Upon getting ready for work one morning, I developed back/chest pain’ that lasted 40 min. It radiated from my upper back to my upper sternum. Being diagnosed with SCAD leaves me feeling alone’ as little is known about SCAD and most Dr’s have never heard of it. My Cardiologist has me on 81 mg aspirin and 75 mg Plavix, and wants another angiogram in 6 mos. He advised no lifting nor exercise for several months. Bummer! ( this has been hard and depressing). I am an avid walker/hiker, don’t smoke nor drink and my angiogram showed a healthy heart, I don’t have high BP, eat healthy (for the most part!) and am not overweight 5’4 110 pounds.’This is so disappointing and all my friends say and you’re so healthy!’ I feel like a walking time bomb’ as no one knows what can prevent this. Therefore I am very interested in this study.I have concerns over having another angio. Do yo think this is necessary? I would like to have a less invasive test. My Dr. still wants to go ahead and sched. one for Feb.I want to mention that in 2010 I had a routine vag. hysterectomy w/ A&P repair, of which I had 3 spontaneous hemorrhages from each site in the 4th ,5th and 6th week post op. I saw many Doctors and ended up in Loma Linda Med Ctr. in CA. This was extremely frightening and almost died of blood loss. The specialists told me I was very rare’, strange and unheard of’. My vessels from each incision had to be cauterized wondering if there is any relationship in regards to my vessel tenacity/turgor along with fluctuating hormones. The Drs were so puzzled and still are. I am continually haunted, emotionally over this. Now I am again told, with SCAD, that this is very rare’ ..I am looking forward to what will be learned in this study, and hope I can be of some use!Thank youElaine

We have to undergo a lot of uncomfortable stuff to achieve what’s good in our better interest.