How your brain can create an extreme stress response 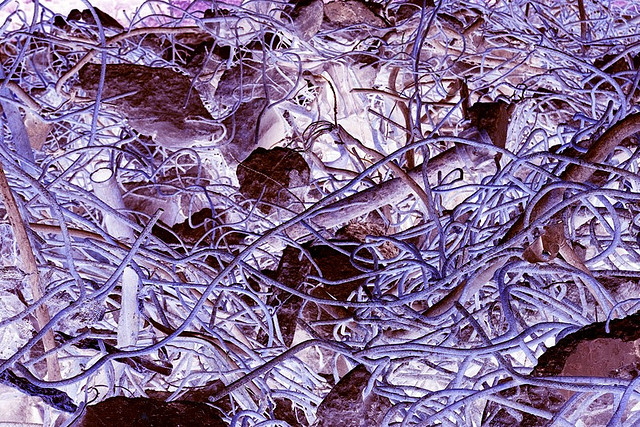 The brain’s response when someone is experiencing a panic attack looks something like this — a chaotic tumble of neuron pathways and firing neurons. [Image credit: Bill Benzon on Flickr]

You’re walking toward a podium, about to deliver a speech. You’ve been feeling nervous all day. It’s gotten worse as you’ve watched the auditorium fill with people. You try to take a few deep breaths to calm yourself down. Instead your body breaks out in a cold sweat. You feel a lump forming in your throat. It’s difficult to breath. You feel dizzy. Spots begin to dance before your eyes. Sounds around you become muffled and broken. You can feel your body swaying and grasp frantically for something to keep you standing. Fortunately someone sees your distress and helps you to a seat. It takes a while, but you slowly come back to yourself. As the world returns to normal, you realize you’ve just had a panic attack.

While it’s happening, many people mistake the symptoms of a panic attack for a heart attack. Although they share some of the same symptoms, these two conditions are caused by completely different events in your body. A panic attack occurs when your brain reacts abnormally to stress, while a heart attack happens when oxygen in your blood stream is having trouble making it to your heart. Although a panic attack produces a physiological response — sweating, difficulty breathing and apparently failing senses — it’s the brain that instigates everything.

When your brain perceives a situation to be dangerous, the amygdala — an area of the brain that plays a key role in processing emotion — sends signals to your sympathetic nervous system, the part of your nervous system that helps prepare your body for defense. These signals tell your body to prepare for stress by flooding it with the hormone epinephrine, commonly known as adrenaline, and another hormone, norepinephrine, work together to make your body hyper aware. It’s sort of like drinking a cup of coffee to wake up your body and mind. When you find yourself cornered in an alley, these are the chemicals that flood your body and give you the ability to quickly assess the situation. Then you can decide whether it makes the most sense to run from the danger or fight it off.

Once the threat has been assessed and dealt with, an area in the middle area of your brain called the periaqueductal gray, signals to your parasympathetic nervous system — the part of your nervous system that calms you down. Once this happens your body is flooded with acetylcholine — a chemical responsible for lowering your heart rate. This returns your body to its resting state. However, sometimes the periaqueductal gray doesn’t activate the parasympathetic nervous system and the body is left with an extreme stress response with no place to go since giving a speech doesn’t require the same rush of energy as being cornered in an alley. The part of your brain that would have stopped the chemicals from building up in your body isn’t working properly. You are left with a body experiencing extreme stress. In essence a panic attack.