Running away from fat

Lower levels of fat hormone may increase motivation to exercise 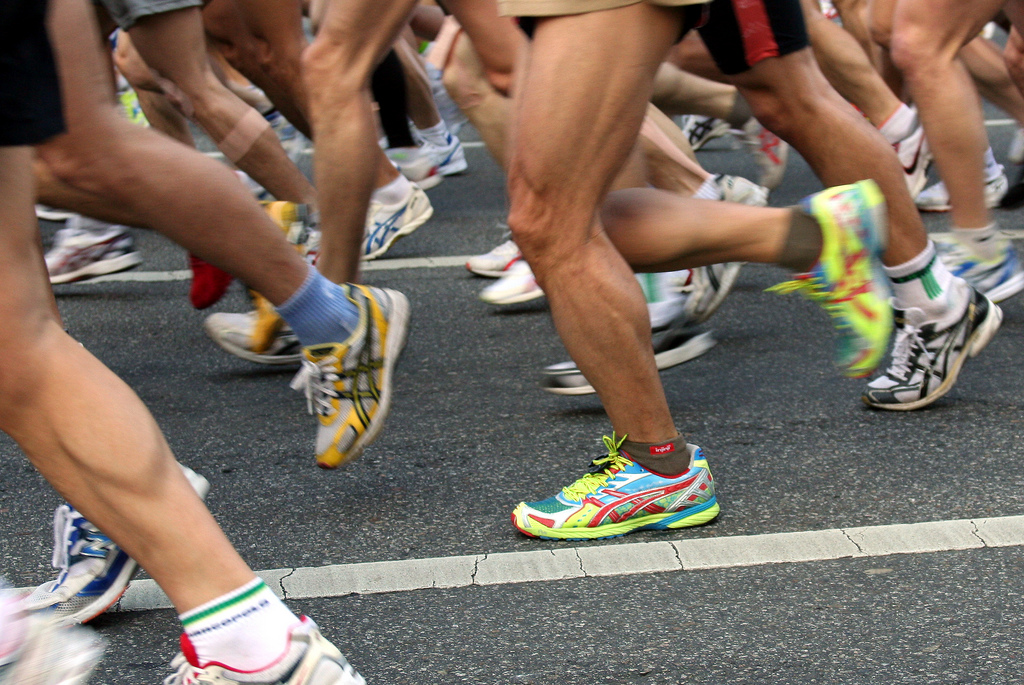 Leptin, a hormone produced by fat, may play a prominent role in the motivation to get off the couch and go running. [Image credit: Flickr user Josiah Mackenzie]

Why is working out so painful?

In early November, nearly 50,000 runners crossed the finish line of the New York City Marathon. Yet, those of us on the sidelines may wonder why anyone would voluntarily subject themselves to a 26.2-mile race. The answer for many marathoners is “runner’s high,” a short burst of post-exercise euphoria that rewards them for their exertions and motivates them to run even longer and faster the next time.

But what causes runner’s high? Researchers have traditionally attributed it to endorphins, hormones that inhibit pain signals in the brain, making us feel elated. A new study, though, suggests another factor could also be at play: fat.

The study, published in the September issue of the journal Cell Metabolism, found that a hormone secreted by fat cells has a significant influence on the motivation to run — in mice, at least. The hormone, leptin, has been previously linked to appetite and obesity. Mice with lower leptin levels voluntarily ran on their wheels more frequently and for longer periods than their higher-leptin counterparts, the research team found. In fact, the more the mice ran, the more “runner’s high” from lower leptin levels rewarded them for running, so they were motivated to run even more.

The findings may help explain why some people are more motivated to exercise than others and eventually might even lead to new drugs to encourage overweight people to work out, according to Stephanie Fulton, a neurobiologist at the University of Montreal and the study’s lead author.

“Understanding signals involved in motivating running, particularly in a hormone associated with obesity, could be very helpful in encouraging exercise and targeting the disease,” Fulton says. For example, if we know that lower leptin levels increase motivation, researchers could potentially develop leptin-blocking treatments to help jumpstart exercise programs for those less inclined to be active.

Other researchers are more cautious about such a treatment. Since low leptin also contributes to hunger, a leptin-blocking medication could cause the patient to eat more, according to Gregory Ruegsegger, who studies exercise physiology at the University of Missouri.

However, Ruegsegger proposes a potential solution: a drug that directly targets the dopamine-releasing system in the brain. Dopamine, the brain’s reward hormone, helps to reinforce behavior by creating a sense of euphoria. By increasing dopamine levels, scientists could increase the motivation to run without having to block leptin. Leptin seems to work through the dopamine system so targeting the system rather than leptin directly could be another way of helping people get off the couch, he says.

For their study, Fulton and her team genetically engineered mice to produce much lower amounts of leptin. They then measured how often the mice would choose to run on their wheels and how long these running bouts would last. Mice with low leptin levels ran 83 percent farther than normal mice, the researchers found.

To test motivation to run later on, the researchers placed each mouse in a two-chambered box with a running wheel in one room. Over time, the exercising mice began to associate the wheel room with exercise: When the wheel was removed, the mice usually chose to spend more time in the former wheel room — and mice with low levels of leptin were even more partial to this room. To Fulton, the experiment shows that mice experience a post-exercise reward — they associate the room with the reward, and so spend more time in the reward room.

Leptin does not act alone to create the reward, Fulton adds. Instead, she says leptin works with endorphins to induce runner’s high. One possible way they work together, she theorizes, could be that endorphins may be responsible for the euphoria experienced during exercise, while leptin is more related to post-exercise motivation.

That may seem surprising since one of leptin’s major roles is to signal fullness after eating, so we’d expect low levels of the hormone to encourage energy-saving behaviors, not more exercise. A possible explanation, according to Fulton, is that in times of hunger, low leptin levels may motivate animals to seek out food.

“Maybe endurance exercise lowers leptin levels to keep us going. Evolutionarily, this encourages us to keep foraging and hunting,” she says. Fulton plans to explore this hypothesis with long-distance maze experiments to look for a connection between running motivation and food-seeking behavior.

Other researchers are similarly enthusiastic about this line of research, including extending it to human studies. “I think [the study] is a very good way to look beyond running to the underlying reinforcement,” says Ralph DiLeone, a neurobiologist at Yale University. “It’s a strong combination of behavioral, biochemical and genetic manipulation, and gives us a good basis from which to study humans.”

Great piece. I don’t think the connection between exercise and size or running and size is as tidy as it appears in Cell Metabolism. Take a look at http://fatgirlrunning-fatrunner.blogspot.com/ Mirna Valerio is inspiration, and I think you’ll enjoy reading about her recent experiences doing the Javelina Hundred 100k.