When it comes to pie, it’s all about ratios 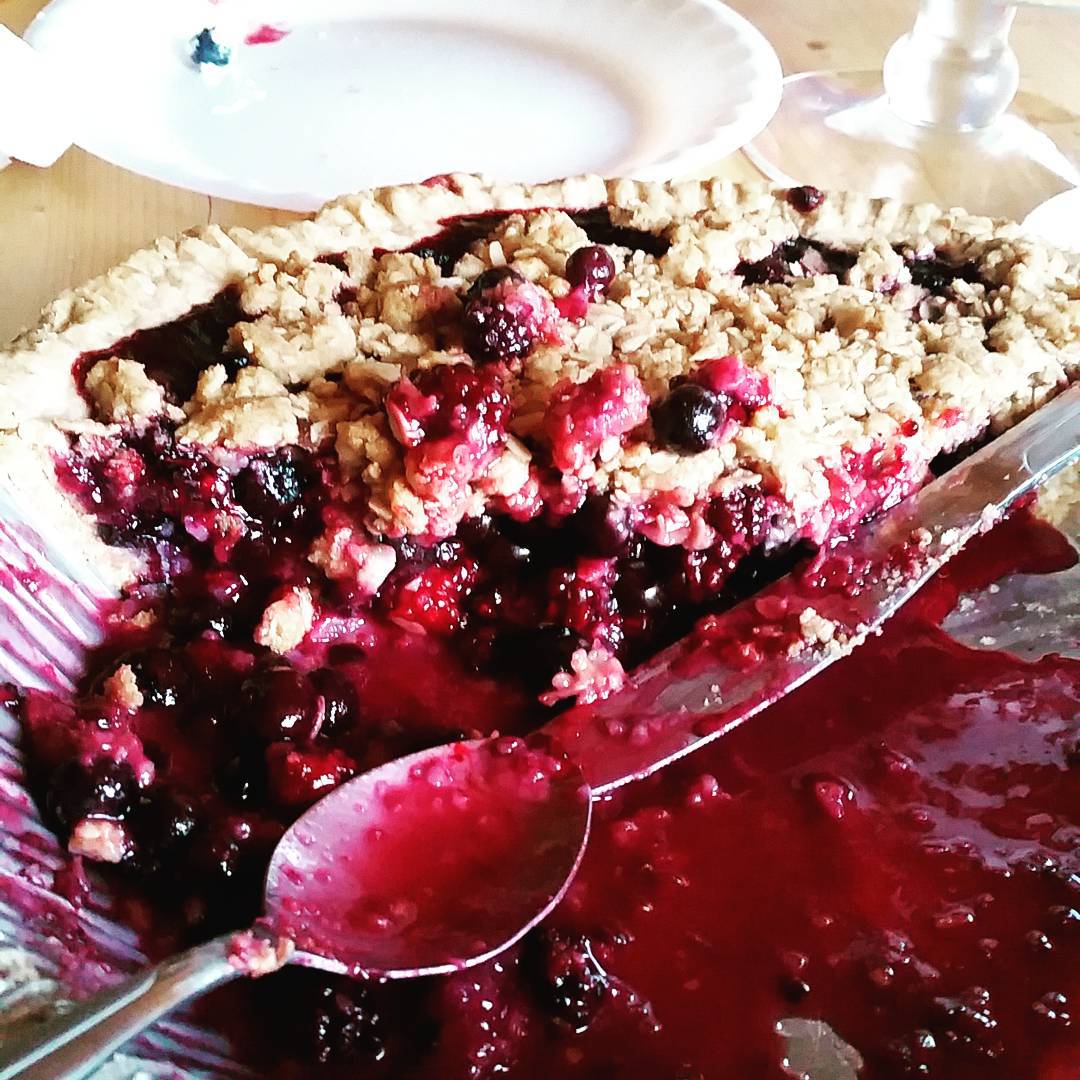 I topped this blackberry & blueberry pie with oatmeal crumbs, but the perfectly crisp crust was the real hero. [Image credit: Peter Hess]

Back before I knew better, I mixed pie dough with my bare hands. I loved the feeling of squishing the butter into the flour. But all the dough that stuck to my fingers got everywhere except in the crust. Since then, I’ve learned better pie crust techniques from others’ experiences, and it shows. Now the only mess my pies make is on my plate, when I eat them. As with any education, I have learned as much from discussions with fellow experimenters as I have from cookbooks.

Baking, more than many culinary realms, is a science. It is an often exacting process, in which using a less-than-sparkling clean bowl, failing to check a timer or incorrectly measuring ingredients can result in a wimpy merengue, a fallen soufflé or brownies that just won’t cook all the way through. But when it comes to pie crusts, science seems to take a back seat to tradition and preference. Should you use sugar? Should you use cold water or warm water? Should you add vinegar? Should you use butter, lard or shortening? Should you pre-bake your crust? What about adding vodka? Why would you even do that?!

If you’re thinking that this all sounds too complicated and it might be better just to buy a pre-made crust, do not be deterred. Emily Elsen, co-founder of Four & Twenty Blackbirds pie shop in Gowanus, Brooklyn, says that the reward of homemade crust is worth the effort. And besides, none of the pre-made crusts she’s tried have come close to the quality of homemade. “Don’t be afraid. It’s not that hard,” says Elsen. “There’s something magical about making pie and people being like, ‘What? You made this?’” So while the possibilities may be endless, you only need to know the basics to make a great crust.

Let’s start on the ground floor. Most of us can agree that a pie crust consists of flour, salt, some kind of moisture and some kind of fat. But that might be all that we agree on. My granny, Lillian Hess, uses a recipe that falls on the simple end of the ingredient spectrum. She deploys flour, vegetable shortening, salt and water. That’s it. You can use nearly any fat you want — butter, lard, olive oil and even coconut oil — with any number of variations on dry ingredients (like sugar) and liquids (like apple cider vinegar). But the alchemy of pie crust lies in proper handling. My granny may not use a fancy recipe, but with proper preparation, she transmutes these most basic of ingredients into a golden, perfectly crispy crust for some of my favorite pies.

The secret is twofold: add just enough water to make the dough cohesive, and don’t overwork the dough. My granny mixes her dough with a fork, which is similar to Elsen’s recommendation of using a handheld pastry blender. Both achieve the same objective — blending flour with your chosen fat until the dough is workable but not overly handled. The dough should not be uniform in texture, but like cornmeal with little chunks of butter, says Elsen. “When you use a food processor, people tend to overblend.”

Now that we know how to properly blend our dough, let’s talk ingredients — the most contentious realm of pie-making. Whereas my grandmother has always used shortening, Elsen prefers butter, specifically the European style with 80 percent or more fat content. She says the higher fat content lends to a flakier crust. I typically use whatever store-brand butter I have in the fridge, so after talking to Elsen, I began to wonder whether I should be using European butter. As it turns out, a comparison in Cook’s Illustrated found that the “clean dairy” flavor of Land O’Lakes unsalted sweet butter was nearly as good as their top-rated brand, Plugrá, a European variety, but costs only half as much. I’ve always been satisfied with the consistency of my pie crusts, so I think for now, I’ll stick with butter. The fact that it’s a fat is the key, so experiment until you find what you like.

Speaking of experimenting, some bakers may be curious about lard, coconut oil or other fats, and I say go for it. Elsen likes to use lard in a fifty-fifty mix with butter, but usually sticks with butter because it’s a crowd pleaser.

Now let’s talk dry ingredients. The consensus among me and my experts is that salt is always welcome in a pie crust. My grandmother uses a half teaspoon for a nine-inch crust. Elsen and I do too. But what about sugar? Elsen uses it, but granny doesn’t. I use it when I remember to, but I don’t miss it when I forget. After all, the filling is sweet enough. That brings us to the last dry ingredient that I always use, but neither Elsen nor my grandmother use: a pinch of baking soda.

This is where my particular pie crust recipe turns away from science and incorporates a dash of superstition and nostalgia. I use baking soda because I remember the 8-year-old protagonist in a children’s book saying it would make the crust light and airy. But my grandmother, whose judgment I trust almost as much as the test chefs at Cook’s Illustrated, says it probably wouldn’t help because there is not enough liquid in a pie crust for the baking soda to make a difference. Elsen doesn’t use it either. But against all reason, I stand by my habit.

Once you have your butter or shortening blended with your chosen fat, it’s time to moisturize the mixture. Elsen, my grandmother and I all agree that you want to use about a half cup of water, sprinkled in a little bit at a time. You want just enough to be able to work the dough together, but not so much that it becomes uniform in consistency. Elsen and I both use ice water because the low temperature will help keep the fat from softening too much, making your crust greasy and overly-blended. My grandmother uses whatever comes out of the tap, though, so if you work quickly, whichever you choose should be fine.

Then there’s the matter of unconventional additives such as vinegar and vodka. Elsen uses apple cider vinegar, but she says you could use lemon juice or any other acidic ingredient. “It adds a little bit of tang and seems to help tenderize [the crust] a bit.” I have recently begun to experiment with apple cider vinegar, and I like the taste, so once again, this choice boils down to preference.

I recently heard about people using vodka in pie crusts, and I was intrigued. J. Kenji Lopez-Alt, formerly of Cook’s Illustrated and now at Serious Eats, found that 80-proof vodka in place of half of the water results in crust that is easier to roll. And since the vodka evaporates in the oven, it does not alter the taste. Again, I encourage the adventurous reader to experiment with different ingredients once you’ve got the basics down pat.

Since the crust should shine, and not merely be background, we want every bite to be the perfect texture. In pies that don’t cook for long, such as custards and pudding pies, many chefs will pre-bake the crust to keep the bottom from getting soggy. My grandmother recommends poking holes in the crust with a fork so it wont bubble up from the pan when pre-baking. And how long should you bake it? Well, until it looks golden brown. “I never even time it,” she says. “I just keep my eye on it.”

When it comes to pies, if you follow some basic instructions, you can’t go wrong. And once you’ve figured out the basics, the possibilities for experimentation are endless. These days, my crust experiments don’t get too wild. But as a nod to my grandmother’s recipe, I sometimes substitute shortening for half the butter in my crust, if I happen to have some in the kitchen. I may have a world of scientifically-vetted recipes at my fingertips via the Internet, but at the end of the day, she’s the one who first taught me to make a pie. It was shoo-fly, if I recall correctly, and I still maintain that she makes the best shoo-fly pie. That first crust was far from perfect, and even as I’ve gotten better at baking, my crusts are still not picture-perfect. But they are so much more satisfying than pre-made ones. So whether you learn from others or make it up as you go, pie lovers seem to agree: it’s best to make it yourself.