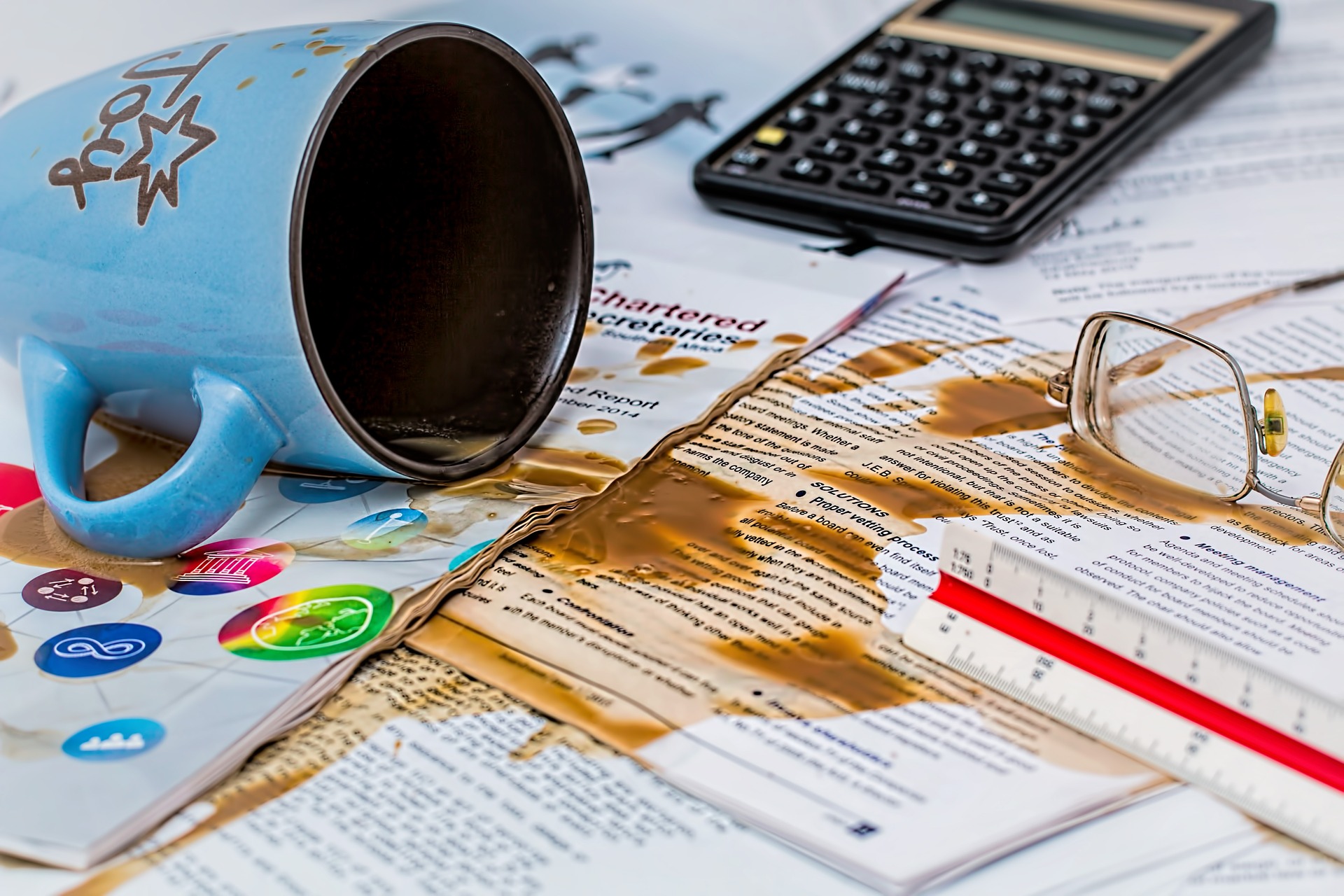 By studying what happens in the brain after we make mistakes, we can learn how to recover from errors. [Image Credit: pixabay user stevepb | CC0]

You’ve had a hard day. You were running late this morning because you forgot to make your lunch the night before. While you were frantically making a sandwich, you couldn’t find your good travel mug, so you put your coffee in an old one that you’d stopped using for some reason.

As you raced to the car you jostled the screen door and ended up drenched in coffee. That’s when you remembered that the lid to the old mug doesn’t close properly. You sprinted back inside, changed your shirt, and raced to the office. As soon as you got there, late, your boss asked about the timecards you were supposed to review. In your mind’s eye, you could see them sitting next to your front door where you threw them out of the way of the coffee fiasco. You’re going to have to use your lunch break to go back home to get the timecards—so never mind that sandwich. And now your ex is calling. You have to make a choice. Do you pick up?

Mistakes are funny things. They affect you in ways researchers admit they don’t totally understand. The “oh shit” feeling, the tunnel vision, and slowed decision making are all tied into how your brain recovers from mistakes — and whether you make bad decisions like talking to your ex. What happens in your brain as the phone rings has been a driving question of behavioral psychologists for decades.

After making a mistake, decisions take longer. This phenomenon, called post-error slowing, has been studied since the 1970s, but its cause has remained mysterious. Although it has been assumed that the slowing is good for something, a paper published in Neuron in early February challenges that assumption. Although their findings are far from universal, Roozbeh Kiani and Braden Purcell’s work brings up new questions and tools to examine how the brain makes decisions as a whole.

Studying how the brain responds to errors can teach us how to examine our thoughts. It can also reveal the connection between our conscious minds and brain activity. It is still unclear if how we respond to mistakes is innate, or if it can be changed. By studying the way we respond to errors, researchers can help us learn how to make better decisions. “There are a lot of deep philosophical and scientific questions in here for sure,” says Roozbeh Kiani, a neuroscientist at New York University and co-author of the Neuron paper.

It’s “right at the cusp of when things are getting interesting in this area,” says James Cavanagh, a behavioral psychologist at the University of New Mexico. Post-error slowing on a basic level is the observed pause in decision making after an error. But it is also “a lever for understanding cognition and the basic building blocks of how the brain is structured,” he says.

For a long time researchers believed that post-error slowing was a way to slow down decisions in order to be more accurate after making a mistake. This assumption is wrong, say Kiani and Braden Purcell, a computational psychologist post-doc at NYU. Instead, they suggest that post-error slowing is the interaction between two processes, one that prevents the brain from getting sensory information, and another that slows conclusions in order to make decision making as accurate as it had been before the error.

When Purcell joined Kiani’s lab roughly two and a half years ago, the two researchers started a warm-up project on post-error slowing to get used to the computational models Purcell was working on. “We really believed what was out there in the literature, which was that this is all strategic, this is all positive, all adaptive,” says Purcell.

But Purcell couldn’t find any evidence that people became more accurate after making mistakes. Instead, their chance of making an error remained constant.

“As soon as Braden looked at the data it was like — wow, here is something that everyone else missed,” Kiani says, his elegant fingers steepled and his thick dark hair salted with gray, as he tries to mask the pride in his voice. A lack of improvement hinted that post-error slowing might not be as useful as everyone had assumed.

In order to test Purcell’s observation, they brought in a group of people and a number of monkeys to make mistakes. In a dark room, the subject sits in front of a computer screen, head cushioned in a frame to keep everything but their eyes from moving. At the center of a screen a cloud of barely moving dots appears. The subject has to determine if the overall motion is to the left or to the right. They answer with a flick of their eyes to the corresponding side of the screen, where they’re instantly met with a happy beep of success, or an angry beep of failure.

The monkeys in the trial are stately creatures. A post-doc carefully wheels a calm individual with a wiry grey ruff past the window of the lab. The Rhesus macaque lounges in its throne, as it observes the world go by. The monkeys spend four to eight months slowly learning the task through positive reinforcement, until they can do the task as well as Purcell himself. That level of accuracy is the only way Purcell is comfortable believing the monkeys understand what he’s asking them to do. And like working with children, he says, “it’s actually crucial that they stay happy, that they stay engaged. An angry, unhappy monkey is never going to want to do the task.”

While the monkeys were performing the task, Purcell was able to measure the electricity in individual neurons involved in decision-making. After an error, neurons received less input. They also required more total electricity to fire with a decision. This means that neurons are getting less information about the environment, and can’t make decisions as easily after an error.

Purcell discovered something very important — an interaction between two opposing effects. The first reduces the sensory information your decision-making neurons receive. This hampers your ability to assess the situation. A second effect forces your brain wait longer to make a decision. This is your brain making up for getting less information.

Although it isn’t clear why the dip of sensory information happens, Purcell thinks that it may be because your brain is hard at work figuring out why the mistake occurred. This could leave less processing power free for other things. “So you made the error and now you are evaluating the consequences of this error — what needs to change moving forward? And as a result, you are less attentive, less engaged,” he says.

“When something crazy happens, mammals just innately stop and slow,” says Cavanagh. In his work in behavioral psychology, he sees decision making as layers upon layers of different mechanisms. Some of these he believes are innate — and not necessarily useful.

Finding that post-error slowing isn’t increasing accuracy forces researchers to re-examine that assumption, says Ruud van den Brink, a PhD candidate in cognitive psychology at Leiden University in Amsterdam. The elements of post-error slowing that aren’t adaptive have been largely neglected, he says. He thinks that the field will start to examine that more closely, as the Kiani and Purcell paper “really highlights that there are multiple process at play.”

It is unclear why a process exists that seems so maladaptive. “As scientists we must confess that we do not actually understand this process,” says Kiani. In the context of the simple tasks in the lab, this decrease in sensory information doesn’t make a lot of sense. “But if you put it in the context of real life events that happen,” Kiani says, “when we receive negative feedback in real life, that’s often a signal of a much bigger thing that can be happening.”

Although Kiani and Purcell describe the neural actions within their task with a level of detail that hasn’t been seen before, there is a question of how broadly their work can be applied to other tasks. One thing that makes generalizing the study results difficult is the inclusion of the feedback noises. While necessary in animal trials, it’s not common in human trials, and makes it hard to know if subjects are responding to the innate “I got that wrong” sense, or to the feedback.

In Brink’s work that examines brain waves and error, feedback noises would mess with the synchronization of brain rhythms. However, Brink believes that the variety of tasks is important, as seeing similar results across different tasks provides more evidence that the phenomenon is universal and generalizable. Over time, results in different types of studies on decision-making and errors have proved to apply more broadly.

Despite the diversity of tasks across the field, Cavanagh believes that research findings will continue to converge. The variety of tasks makes it harder for researchers in the short term, but makes the field stronger in the long term, he says. Cavanagh advocates for putting in the years to develop new tasks, while tweaking old tasks to get at deeper questions. He warns “undergrads and monkeys will always outsmart the researchers,” he says and laughs, “if there’s any flaw in the game, they will exploit it.”

And at the end of the day, how you respond to making mistakes has a large impact on your life. Do you answer that call from your ex? “If you make us bet whether it’s a good idea to go immediately and do something rash,” says Kiani, “versus waiting a little bit and letting the effect of negative feedback wear off before making another decision — I’d put my money on the second one. I think that’s the better way of living your life.”